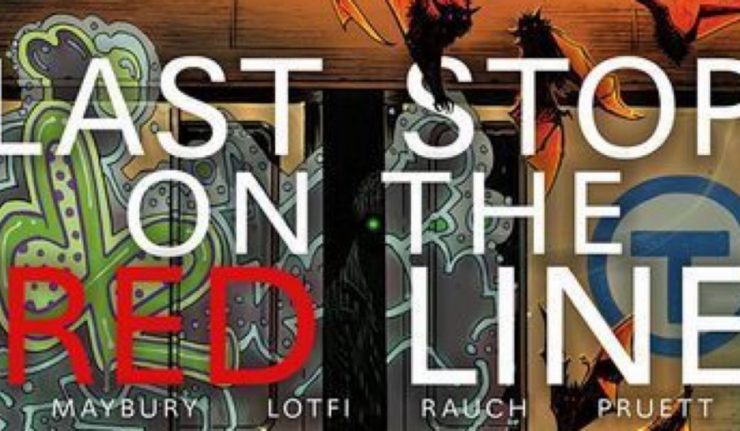 How do summarize one of the most inventive comics on the market? Well, Last Stop on the Red Line #3 picks up where the last one left off. Zev and Wolf are scattered to the wind after the raid on their home. Ben seems hell bent on making their lives harder than they already are. Mig and Yousef are drying out from the frigid swimming they did on the final panels of issue 2. Warren, Mig’s husband is really angry all the time. It is hard to know if we should side with him or not. I mean, we have twice seen Mig and Yousef mostly naked at the same time. It seems innocent enough, but…

Last Stop on the Red Line features not only some in depth character development done in subtle ways, but Paul Maybury sure can turn a phrase. Early on in this issue of Last Stop on the Red Line, Yousef and Mig are having a talk about surviving the bombing. Yousef, who is hands down the most thoughtful character in this book, shows it by saying, “I lost a lifetime. Like I simply Blinked into existence…Baby breaths of smoke and ash. born into a screaming world. And I was the lucky one.”  Damn. That is pretty amazing.

Then, the cleverness continues as he talks about the shrapnel he took and Sam Lofti pulls in to a close up and what do we see there? A scar that looks like the RED LINE! Holy Crap. That is so awesome. Later, when Mig is talking to the Principal, we see two tiny little panels, in one, they are talking calmly. There is a bat above the desk. The window is in tact. In the next panel, the window is smashed, the bat is on Mig’s side of the desk and she is running to the ladies room. Blink and you miss it but that is amazing. Take a bow gents.

Of course, Lofti and colorist John Rauch continue to show off in less subtle ways. How does a mind melting look at a monster grab you? Feast your eyes.

We had to wait a bit to get this issue and I am concerned that readers have drifted away. The plot is complex and it takes place sometime in the future and the past and in dreams and in reality. I hope people went back to read the first two issues again, but I worry they didn’t and that will make this issue a bit confusing.

Last Stop on the Red Line is not a comic for folks who want to speed through and find out who did it. Who “did it” is not the point. Who are the monsters? What is reality? What is the nature of time? These are the questions Maybury and team ask each week. They do not really give the answers and honestly, that is OK. We don’t always need everything spelled out for us do we? I, for one, am thrilled to have this comic back on the stands. If you have not read it yet, there are only three issues. Run. Don’t walk.