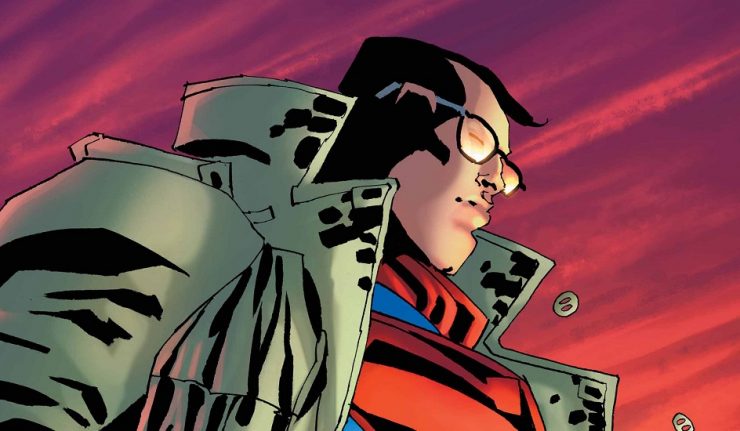 In Superman: Year One #2, catch your favorite Man of Steel…

Does it put your mind at ease,

For Clark to fight and take a stand?

Crushing bombs with his bare hands.

For Atlantis and the mother land!

God above his fellow man!

Where Clark fights a big Krakk-an!

You may look at this summary and think, the Village People, really?  And the answer would be a resounding yes.  This is a weird time for comics.  After all, Frank Miller, grim-dark extraordinaire, is writing Superman, and that’s a lot.  If this is issue #2 of Superman: Year One, the rest of his life must be a real shit show.  Superman: Year One may not be the Superman you like, want, ever imagined, or think could exist, but it’s entertaining to say the least.  It may remind you of a movie that’s so bad it’s good or has a cult following with so many over-the-top elements that you have to wonder if the creative team is aware of their own creation.  It’s easy to read, not as offensive as issue #1, and utterly ridiculous.

The military can be a very complicated topic in today’s climate.  Some have a great pride and respect for it, others not so much.  It’s a fundamental institution that we’ve learned can carry incredible nuance and ingrained values.  To try and speak to all of that while the institution and people’s views are in a constant state of flux would be incredibly complicated and require a lot of care.  Luckily, Miller seems to maybe realize that and does none of the above.  He plays it safe and gives us a military many would like to see or think exists.  We’re talking the kind of military you’d see in a movie like Top Gun; a regular boys club that enforces discipline, toughness, and all that is manly.  If you’re looking for a figure that enforces the strength, intelligence, toughness, and stoicism that’s pushed onto young boys everywhere because people haven’t yet gotten the memo of how outdated it is, look no further than Miller’s Superman: Year One.

And so we have the man who would stand out anywhere in the middle of an institution that preaches rigidity and homogeneity. It only makes sense that young Clark Kent, who always has to restrain himself, would be drawn to the mermaids off in the distance who also don’t belong.  They’re every soldier’s fantasy, so, in this world, of course they’d be Superman’s reality.  They help round out the mythical, demigod image of Clark that Miller wants you to see.  It’s not the kind of romance you’d think of today, but rather the kind from ancient myth.

Romita Jr. and Miki pull off the art quite nicely.  There’s a lot of crisp, clear images and humor conveyed through facial expressions. It’s very crisp, and helps drive home the military setting.  Sinclairs bright blues coloring a clear sky and vast ocean help portray an innocence to it all. It’s vibrant and pure, even when the words being spoken are not.  Workman’s letters, as always, are fantastic.

Reading Superman: Year One #2, it won’t take long to realize that every core element is reduced to its most basic, narrow-minded form.  The Man of Steel goes to the navy to observe his fellow man, towers above them because it is all so easy, and, oh yeah, fights a God for a mermaid he just met and now loves.

If we go through each of this issue’s core elements, it’s easy to see how they’re all stripped of any nuance or deeper meaning.  Superman is incredibly complex with a vast number of attributes spurring from a seemingly infinite number of influences, sources, and role models.  That’s why there’s normally a part of him in all of us.  That’s why he’s the best of us.  Not so much here.  Miller, Romita Jr., Miki, Sinclair, and Workman deliver a less elegant Superman that seems to stand above us all.

We all want to shut our brains off and laugh sometimes, but this issue is a bit ridiculous.  There’s nothing blatantly offensive, but the blasé attitude towards some of the everyday misogyny and toxic masculinity is very unnerving.  You can’t help but be taken aback by the directness of it all.  It practically screams “Superman is better than you,” which is not the message you really want, and this is only the first half.   For all of the heavy-handed ridiculousness, it’s hard to say whether or not Miller is being deliberate. One thing’s for sure, if you want to engage and feel a part of an always relevant text, this may not be the book for you.

A hilarious, entertaining, and ridiculous second issue Superman: Year One #2 is a wild ride from Miller, Romita Jr., Miki, Sinclair, and Workman.