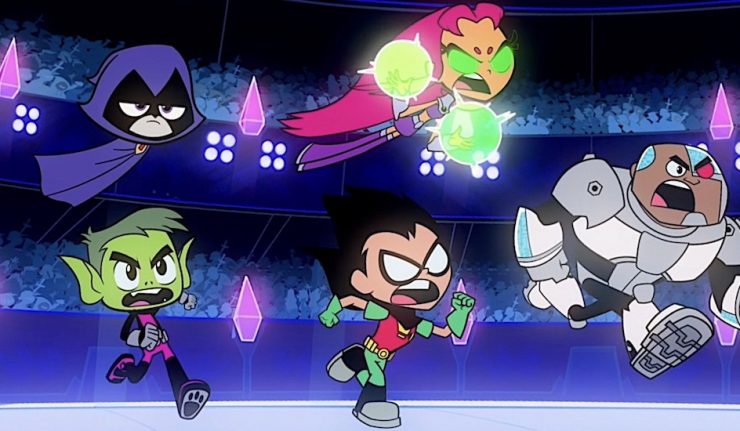 The Teen Titans are undoubtedly experiencing a renaissance! The success of the live-action DC Universe Original Series has certainly encouraged the popularity of one of the imprint’s best-selling brands. The Teen Titans emerged as one of the 80s most read books, giving a certain group of marvelous mutants a run for their money. Eventually the Titans appeared in their own animated television series, even before they said “Go!” and even before they fought crime as a younger version of justice.

Now Warner Bros. Home Entertainment is brining together the two iterations of the animated Teen Titans in Teen Titans Go! vs. Teen Titans available on Digital platforms September 24 and coming to Blu-ray/DVD Combo Packs October 15. You may recall that at the conclusion of the Teen Titans Go! to the Movies the end credits stinger gave a glimpse of the comedic team’s far darker counterparts. The moment suggestion that from somewhere in the animated multiverse the Teen Titans that appeared in the successful 2003 animated series were coming!

Now the two worlds of the Teen Titans animated world will collide in this full-length animated adventure that pits the two sides of the Titans coin against one another in a battle royal that will include some of their most dangerous adversaries including Trigon, Hexagon and Santa Claus (you heard right, Ol’ Saint Nick). Can the vastly different (but basically the same) team of Titans find a way to work together in time to save the universe! The animated feature will pool together the casts of both series over the past 17 years.

Teen Titans Go! vs Teen Titans will be available for digital download on September 24 and is coming home to Blu-ray/DVD Combo Pack on October 15 and is packed with bonus content, including all-time favorite episodes from each of the monumental series and additional special features the entire family can enjoy!