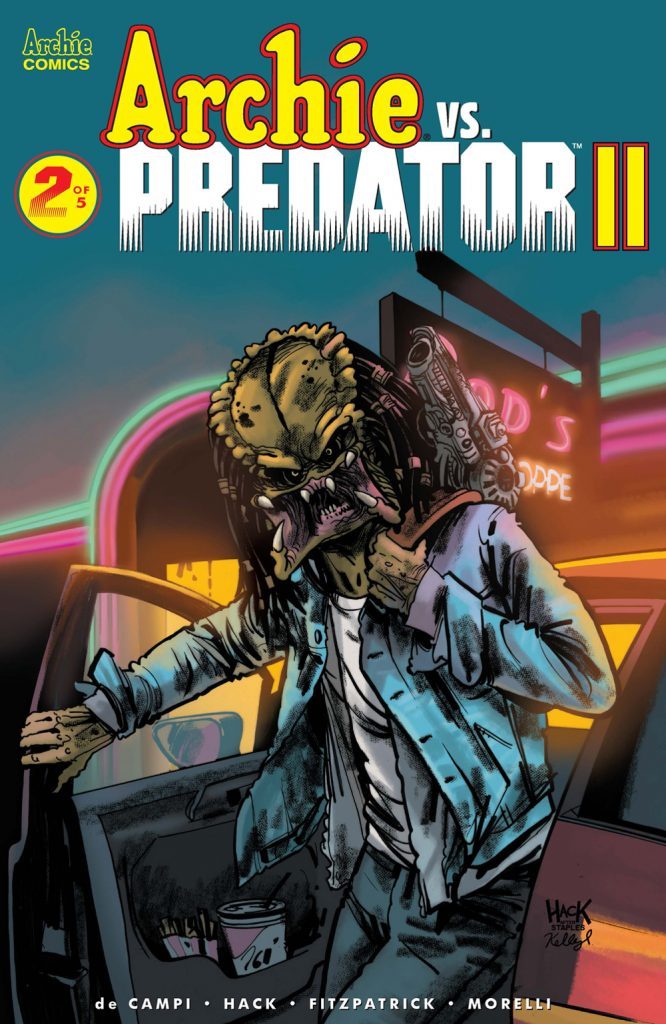 “Which one of you is dating your Archie right now?” –  The Brighter Riverdale Veronica to the Darker Riverdale Veronica and Betty.
Betty, Veronica, and Predator-Archie have been left in the wreckage of their town, all their friends dead. Normally, they’d just go down Memory Lane and get home again where everything’s okay, but that’s no longer an option. It isn’t until they find an undamaged car and drive it down a different road where they can finally return to Riverdale—but their hometown feels different. And it’s made even more bizarre when they come face-to-face with a few people they’d never expect: themselves. Only different, newer versions. Little do they know, Predators on Mars are watching them—planning their next attack

After the shocking ending of the first issue, Archie-Predator, Betty, and Veronica come face to face with… themselves!? Will these two different versions of the Riverdale gang be able to get along?  They may be forced to as danger isn’t far behind whenever there’s a Predator involved! 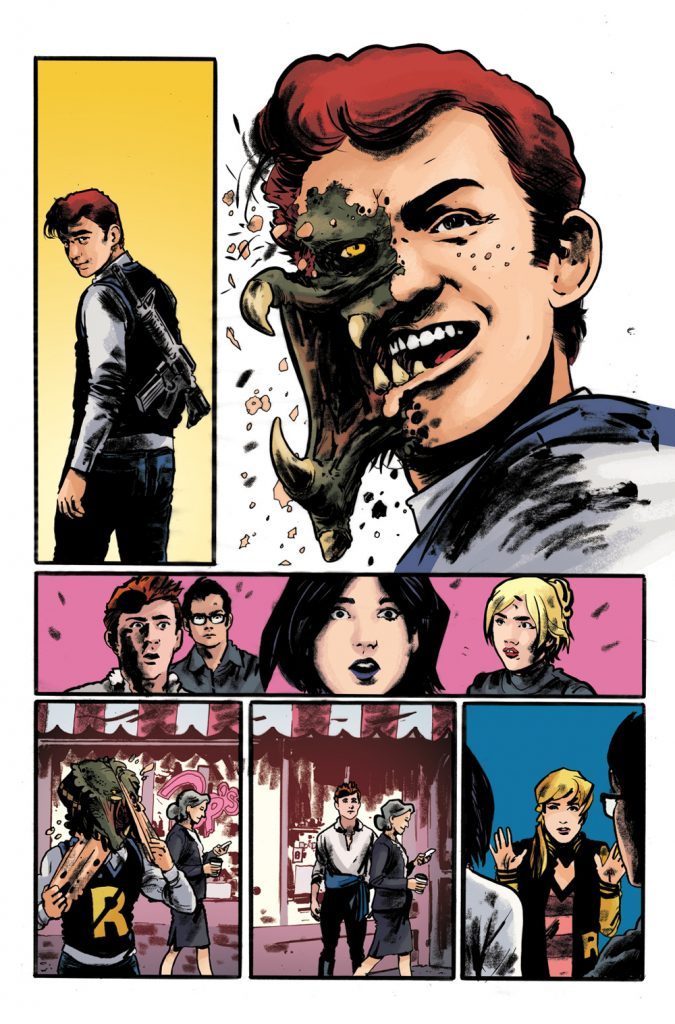 The television series Riverdale has inspired the comic inhabitants of Riverdale to branch out from their roots and go a bit on the wild side.  That being said, if Scooby Doo and the Gang can embrace an Apocalypse.  Then Archie, Jughead, Veronica, and Betty can face…A Predator?

The art is spot on!  Robert Hack has never drawn a better foursome in this book and both Dark and Bright Riverdale gangs are on point!  In fact, it is good to see Archie have an updated haircut rather than the retro “two balls of hair in the front” Archie that the Predator is portraying.

Speaking of the Predator…this one is a bit soft as he did slay a lot of the inhabitants of Riverdale, but always sunny Betty explains that he now wants to stay in this dimension and not go back to his hive.  I always thought that Betty and Veronica were cute….but wow!!!

Alex de Campi does a great job of allowing the Predator to communicate through emojis.  And to use the communication helmet as a way to interpret what the Predator is warning them about…pretty clever.

Holy Stephen King and Carrie!  Is there no high school dance that is ever safe?  What a blood bath when the other Predators arrive?  Are we to believe that the Archie Predator will defend both Riverdale gangs?  Or will he join in the fray as he did in Issue 1? 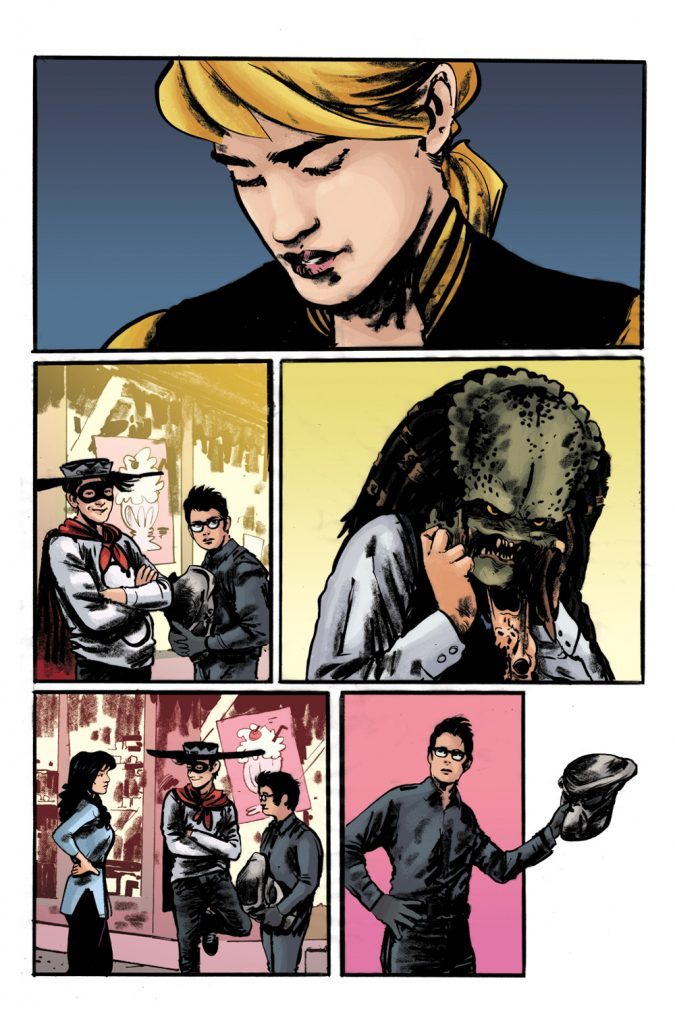 The jury is still out!  Alex de Campi works his magic on an open slate of a universe.  This is not malt shop and hot rod comic.  This is darker Riverdale with a Predator influence.  I guess it’s like the first time anyone thought about bringing chocolate and peanut butter together?  That’s a good thing!  But it can get too campy and it becomes ketchup and ice cream…two great things to eat, but a really odd taste when mixed together! 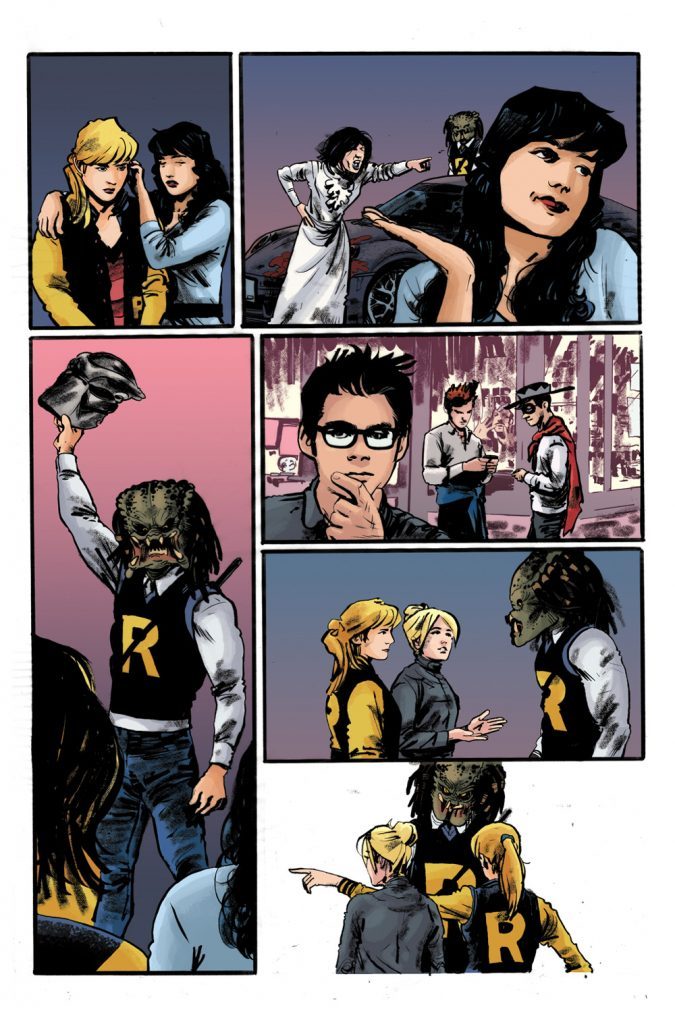 I like the concept as it is “far-fetched”.  It really is bubble gum for the brain as you read it!  But I can’t get over Robert Hack’s art!  His pencils deserve to hit some more major characters.  Here’s hoping this Riverdale gang either finds infinity stones or different versions of kryptonite so they can become an Archie Fantastic Four!  I’d love to see Hack draw that!