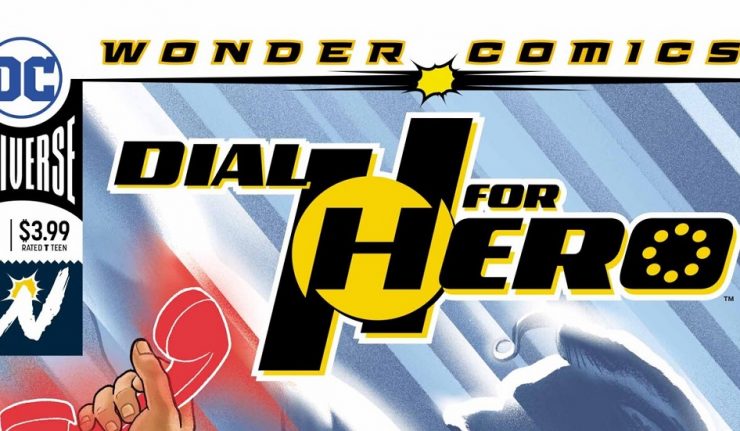 “You must return to who you were, but you will never be the same”  Robby Reed

What happened when Metropolis became the city of a thousand heroes? Get the inside story through the eyes of the ordinary people transformed by the powerful H-Dial into heroes you’ve never seen before!  Dial H for Hero takes a break in the story line to introduce us to a glimpse of all the H dial did to Metropolis!

Writer Sam Humphries jumped the shark with this issue.  The fact that this has become a twelve issue arc really made me think that we as readers would really get some interesting story arcs.  And debatedly, Humphries delivers, but he may have been out of bounds. While Wonder Comics is a line of DC Comics where the comic fare is a bit more light hearted than than some heavy issues, Humphries pushed the envelope in this issue.

It really is up to the reader to determine if this was good or not?  It is not up to me to provide the moral compass of an author and what he is trying to do.  I think that each story has an arc that successfully depicts the city of Metropolis – good and bad.  When powers are involved, if you were bad, then you become super bad.

So working backwards in the comic, Guardian Angel and Lucy the Monster Hunter all have their place as there is good in this world and there is also bad that sometimes wins.  Phantasma’s story is all about patient retribution and how we all may feel about the health care costs. So Humphries has those bases covered in this issue, and he does well by those story lines.

SirPrize could have been handled better.  Who hasn’t tried to work out to make themselves more attractive to those that they are interested in.  And relationships come in all different ways, and Humphries embraces that by making this about Tony and Kevin.  And while relationships between all genders can be difficult and catching a person in a romantic compromise is definitely a problem, I think that Humphries pushed the envelope with a super powered person suggesting a “threesome”. As a parent, I would buy Wonder Comic titles under the DC name with the impression I was getting my son or daughter involved in reading and finding such phrases as “Sockamagee” in Dial H for Hero.  Not the suggested “triple arrangement”. Know your audience Mr. Humphries…again, I have no problem with relationships coming in different ways.  But situational awareness of your audience would go a long way.

To quote again Robby Reed…”You must return to who you were, but you will never be the same”.  I’m not the same after reading this issue of Dial H for Hero.  I’m disappointed.  This is not pivotal in the story line that had been developed.  And three out of the four heroes provided displayed appropriate storylines.  But the one frame…. that one frame really ruined it for me. Here’s hoping that Robby Reed returns to the story and we can continue on the story line provided earlier.  And here’s hoping that if Humphries wants to go down this route, he remembers that Wonder Comics is debatably not the audience format he needs for this!