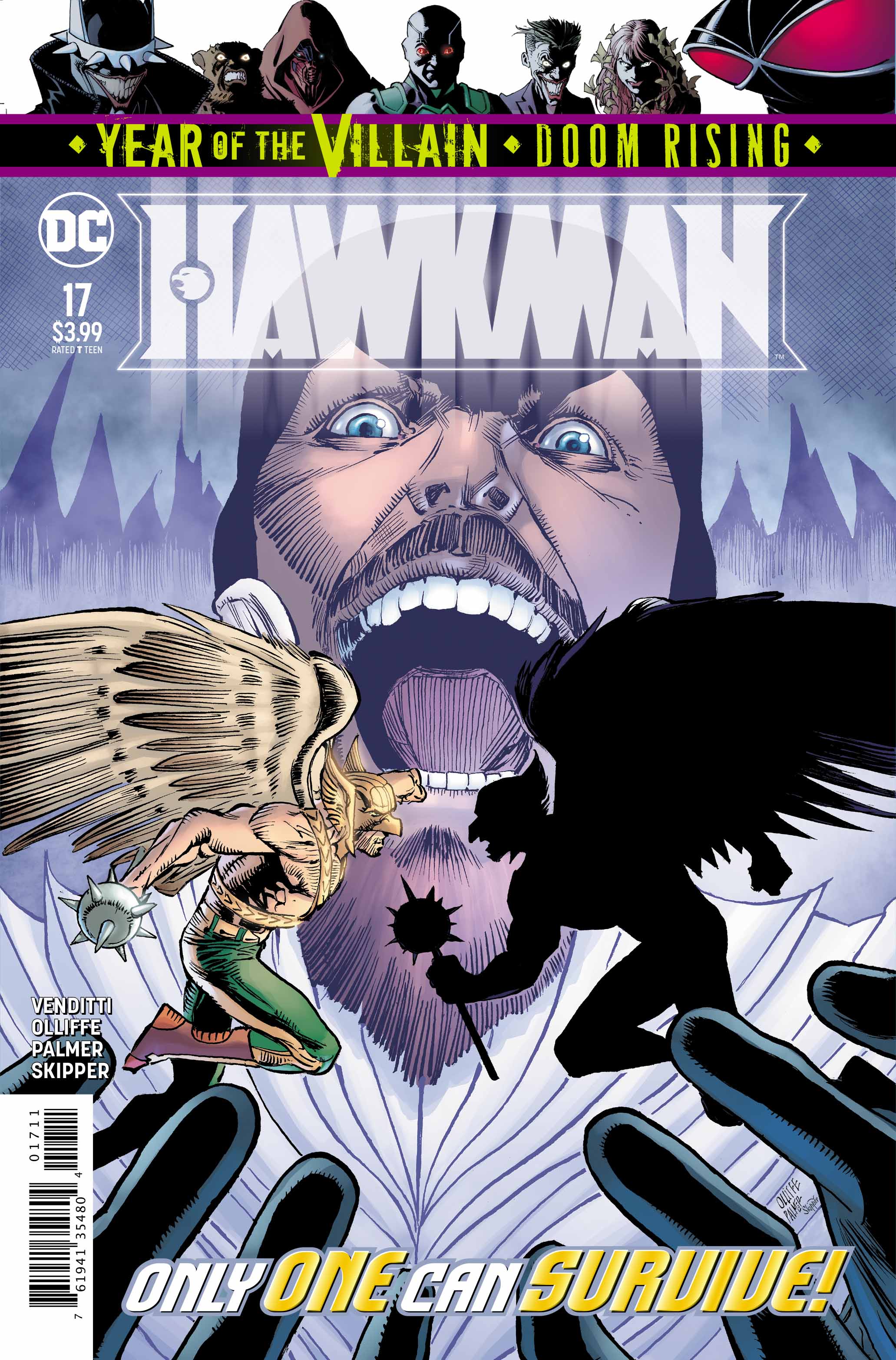 In the shadow realm, Hawkman faces down Carl Sands, the Shadow Thief, but it takes the intervention of the Shade to prevent Carter from losing his soul.  Or, perhaps, it’s already too late….

Back in 1994, James Robinson introduced the world to the newest incarnation of Starman, Jack Knight.  Son of the Golden Age Starman, Ted Knight, Jack was featured in a critically acclaimed series for 81 issues.  In that series, the Shade, one of the Golden Age Flash’s villains was revealed to be more complex than a simple criminal.  Robinson imbued the Shade with a lengthy backstory and a fluid morality that flowed more towards the good in his later years.  This complexity made the Shade just as important as the lead character in Starman.  The Shade is a guest star in the current arc in Hawkman, and his appearances inform the reader that with Hawkman, Venditti is doing this generation’s version of Starman. 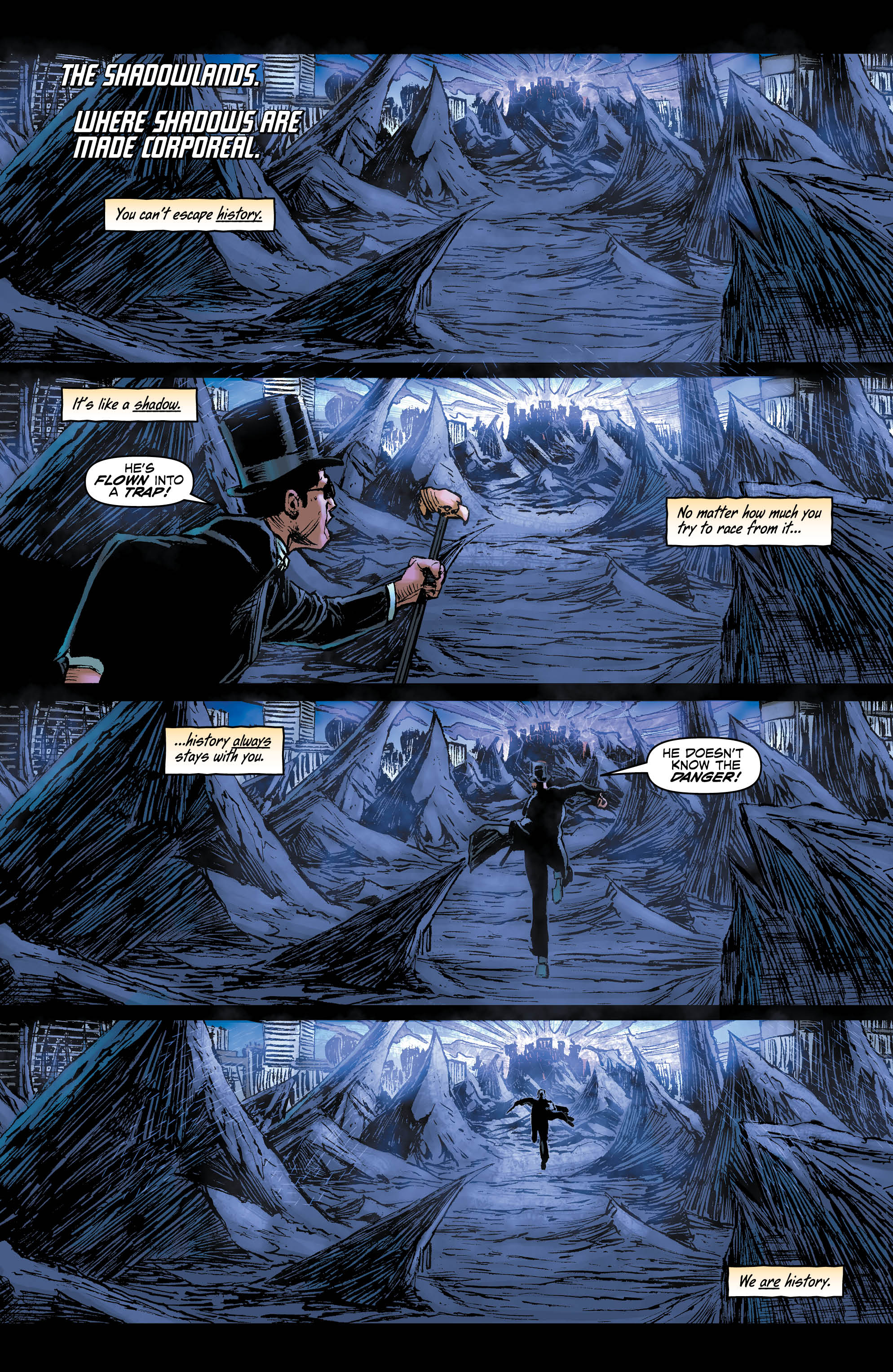 Venditti uses the Shade in much the same way as Robinson used him.  In Hawkman #17, the Shade see’s through the darkness to the truth.  While Jack Knight originally saw him as an adversary, as the series progressed, it became apparent that the Shade was so much more than that.  Robinson attempted to include every character named Starman and develop a unified history and connection between the characters.  It resulted in a lot of great comics.  From the beginning of Venditti’s Hawkman, he has tried to do the same.  He’s taken a character originally from the Golden Age of Comics and crafted a unified explanation of all of Hawkman’s different incarnation over the years.  Venditti even uses the “Time’s Past” element.  However, in Starman, the Shade was often featured, but in Hawkman, Venditti is able to feature the past lives of Carter Hall.  With Hawkman #17, Venditti is showing his hand, as his inclusion of the Shade results in an obvious connection to James Robinson’s Starman.

The Shade essentially saves Carter from a life-changing mistake.  Like in Robinson’s Starman, it is an ironic twist that the Shade provides the road to the moral high ground.  It’s hard not be drawn into the ironic quality of this situation.  While it could be considered a cliche, the work that Venditti is drawing upon creates a different quality, imbuing it with nostalgia and a different sense.  Those who have read Starman will instantly understand what is going on.  If you haven’t…. 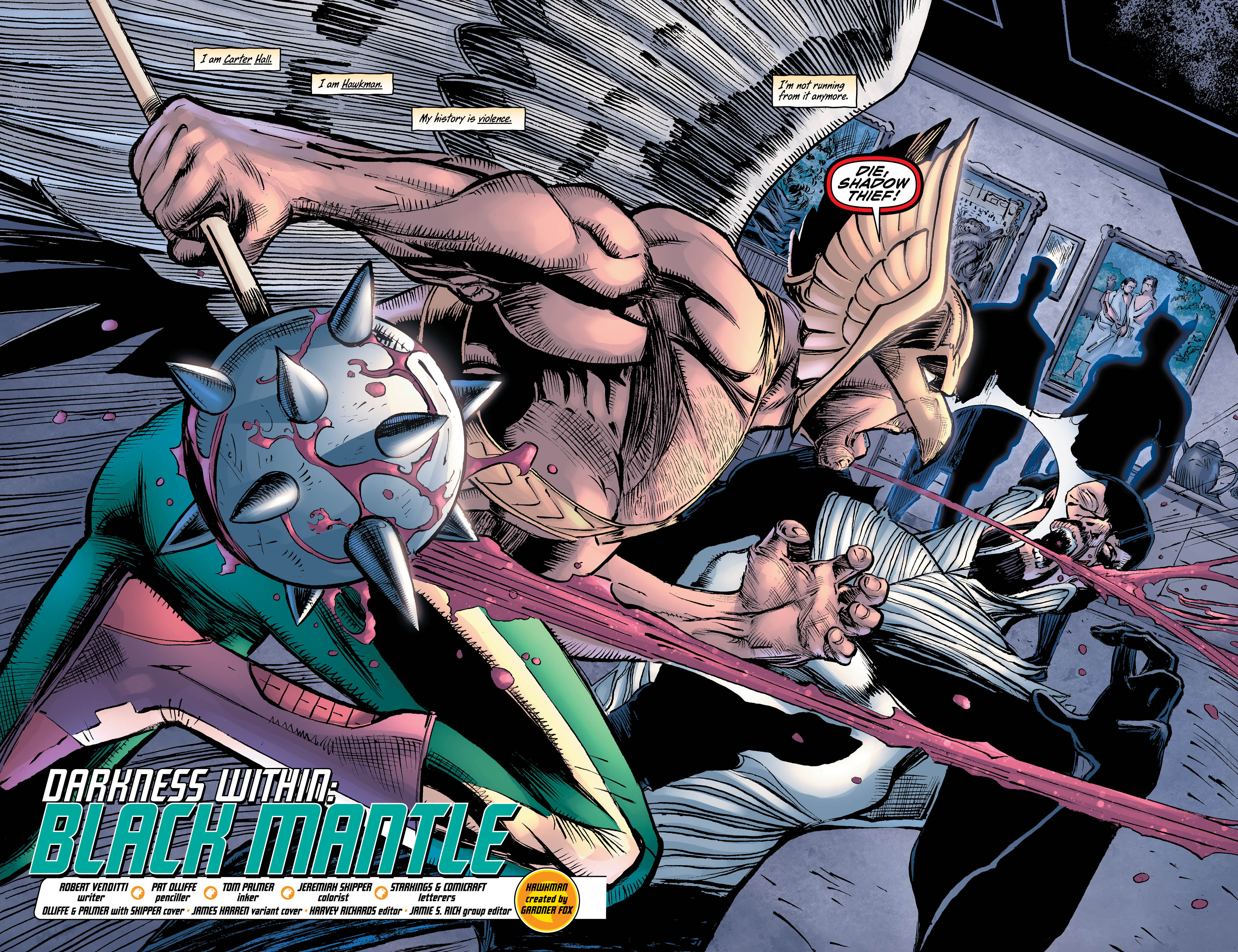 The most engaging aspect of Hawkman #17 is  the relationship that Venditti is building between Hawkman and the Shade.  Clearly, this is a new history for both Carter Hall and Richard Swift (The Shade.)  This “old friendship” so recently revealed adds to both characters.  In some ways, it gives Carter someone who can relate to his own “long life,” or rather “lives.”

As Carter faces his own shadow, it’s easy to see what’s about to happen.  Shadow Thief explains that whatever happens to Hawkman’s stolen shadow also happens to Hawkman.  So, Hawkman cannot simply beat his foe into submission as he feels every hit just as strongly.  It’s not too hard to tell that Carter’s going to realize he has to take the fight to Shadow Thief directly, but it is no less satisfying when he actually does.  This scene is played for just the right length.

Much in the same way Venditti was able to do with Hal Jordan and the Green Lantern Corps, he manages to escalate the intensity of the conflict as he heads into the next issue.  Without giving away too much, one can only hope the Shade will be along for the ride to help him. 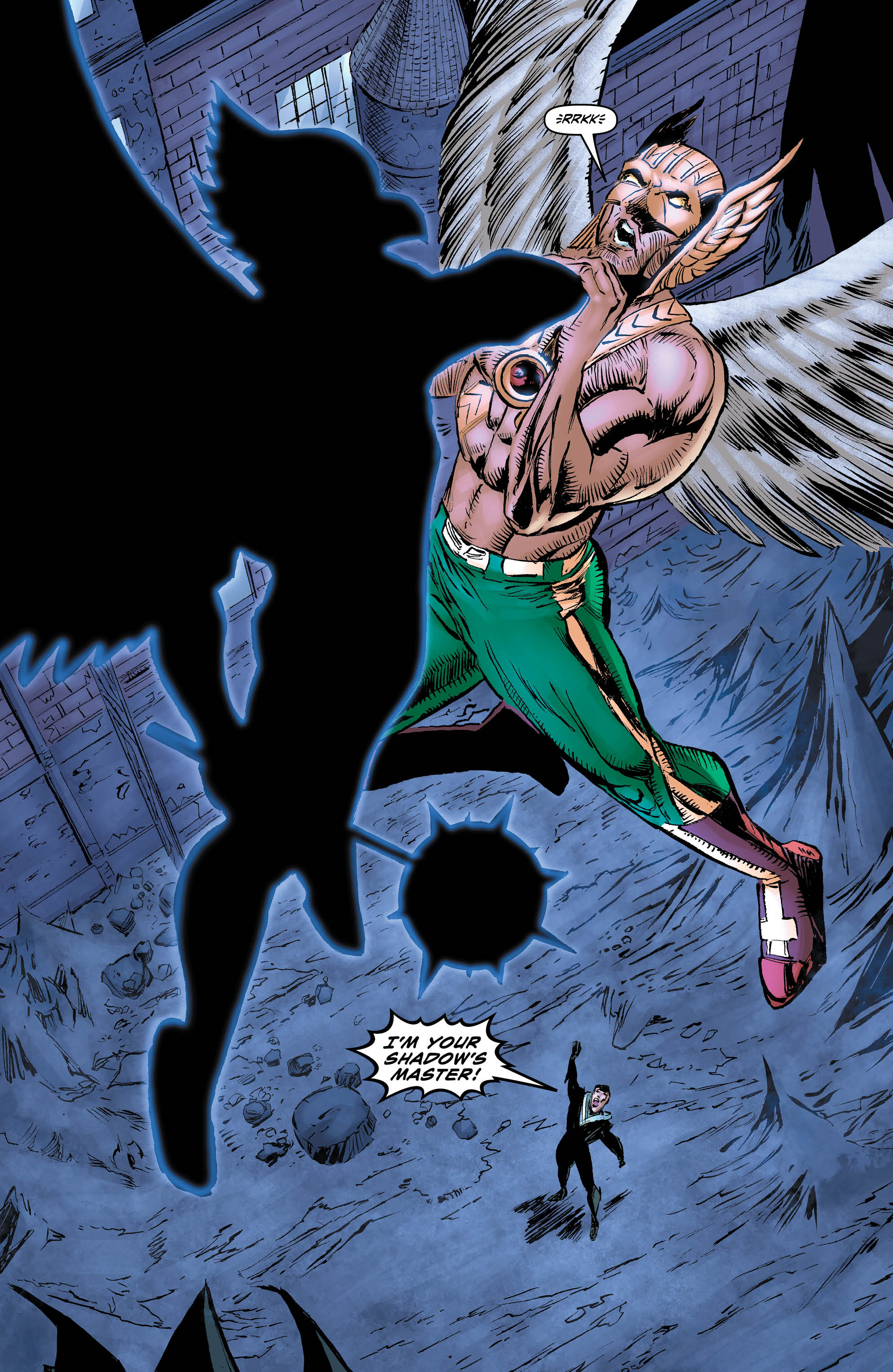 Hard to find a negative.  Even Oliffe’s pencils are starting to grow on me…just a bit of Joe Kubert in there….

It should come as no surprise that Robert Venditti is able to channel some of the magic of James Robinson’s Starman.  Both writers are extremely sensitive to character and have a sense of DC Comics history.  So far, it’s been rather subtle, even though a deeper examination reveals that it seems he been drawing on it since Hawkman #1.  Hawkman #17 solidifies it and at the same time feels like a real “Venditti book” as the writer pushes things to another level entirely with the final page.  You don’t want to miss an issue of this series.  It’s never too late to jump on….