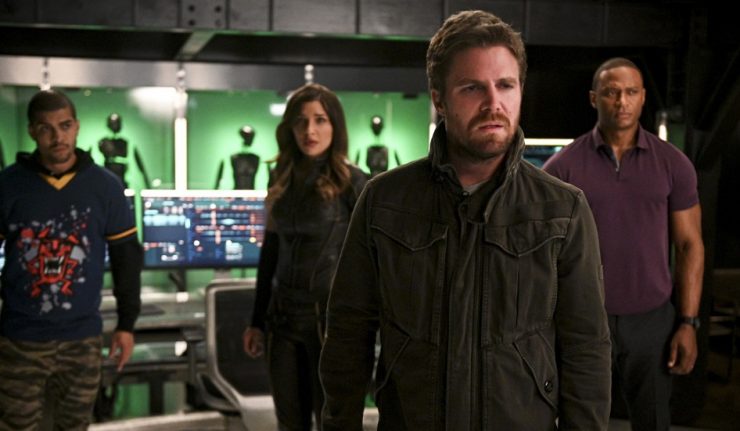 Oliver and Team Arrow must combat the new Deathstroke in Star City as Oliver grips with the presence of his adult children brought back from the year 2040.

Rene’s campaign slogan “The Future is Now” is more relevant now that it literally is in front of them.

The chemistry between the present-day Team Arrow and their 2.0 counterparts varies in complexities, yet works on multiple levels. Stephen has amazing chemistry with Ben and Kat. After a year of getting to know them, this is fan service seeing them stand face-to-face with each other before Stephen puts down his bow forever. The writing team strives to complicate their relationship by focusing on Oliver’s choices rather than time travel. His chemistry with Mia is antagonistic, and Katherine sells those issues. Hers is a different relationship with Oliver in that she has none; all she has is the knowledge he left she and her mother to pursue a mission. The guilt Oliver feels over the consequences of his decision is keenly felt. It’s a weight he’s carried since leaving with The Monitor last year, and now that weight is doubled because of Novu’s antics. The burden of his own father’s sins makes it easier for Oliver to relate to his daughter. The writing does well to show the strong-willed nature both parties share. The moments between them in the field conveys Oliver desperately trying to rein in his vengeful child, and at the cemetery the reluctant acceptance of his guidance is well conveyed by Katherine. Seeing father and daughter in concert works and it’s what fans have been hoping to see.

Ben and Stephen have great scenes together, in particular when William comes out to his father. All LGBT viewers can relate to that hesitancy for fear of disapproval or chastization. Thankfully, the writers take that into account and provide Oliver with the acceptance and insight to recognize that years ago. Ben’s performance is able to take nuances from both Stephen and Emily yet still create a person who is all his own. William has a radically different relationship with Oliver than Mia, and that shows through their connection. The first encounter that includes a hug from his son, yet hesitancy from a daughter that doesn’t even known him screams the distinction. Props to the writing team for avoiding that trap of a woman embracing a parent who is a virtual stranger. Ben and Stephen build on the relationship built with William’s younger portrayer, Jack Moore, and feels natural.

The emotional rollercoaster Ollie is put on this week is shared by Diggle and Rene given their kids’ dark future. The writing team does their best to rationalize how a parent would handle something this complex. Diggle is told his son has embraced a former enemy’s legacy and Rene is told his daughter is slain by that very son. The way they deal with this is realistic in that there is no real definitive answer. Given her history with both men, having Dinah be the voice of reason is common sense. Having the writing focus more on family issues rather than time travel is smart. As the seeds of the future are being planted, Juliana’s performance and her character’s proactiveness give the viewer a sense of hope. The chemistry between Dinah and Rene is keenly felt and you still get that sense that there is hope for more for them.

The Monitor’s continuous role as Chessmaster serves to enhance his duplitious role in the Crisis. Like Lyla, he knows exactly how to coerce a potential pawn. Capitalizing on Laurel’s grief over a world he deemed “a necessary sacrifice” to Lyla last week shows his level of cunning. The fact that he offers this proposition with a smile only enhances that disconnected malice he knows he is creating. LaMonica Garrett’s monotone works to that effect.

Grant Wilson. Up until now, he’s only been a possible future adversary, first seen in the first season of DC’s Legends of Tomorrow. The impact of his being in the present day with no mention of him prior in Arrow works against the level of threat. Regardless of his being Palpatine to JJ’s Anakin, it would have made more sense to gradually introduce him in the course of the series. Given his history in the comics it would have made more sense. Swapping Grant for Joey as the focus for season six was foolish in retrospect. A surprise kid of Slade’s feels too much like a flash in the pan. Further, the resolution is too quick and too self-contained.

I give this week a 4.5 out of 5. Deathstroke Jr. aside, this was a very emotionally strong installment. Bonds are forged, families are reunited, and the future Green Arrow is in the service of her father. As of this review, Stephen Amell tweeted that today is the last day he will wear the hood. I have to say I’m really saddened by this, given my own following of the show. However, I am anxious to see what the trip to Russia has in store for the Queens, the Diggles, and the Ramirezes. I find it clever how every installment seems to focus on a theme or adversary from previous seasons. The writing team is trying to tie up loose ends as best they can. Keeping Laurel the wild card just when viewers see her start to build the foundation of The Canaries is smart plotting. Keep your quiver full and your bow aimed at next Tuesday, fans, for the best is yet to come. Prochnost.