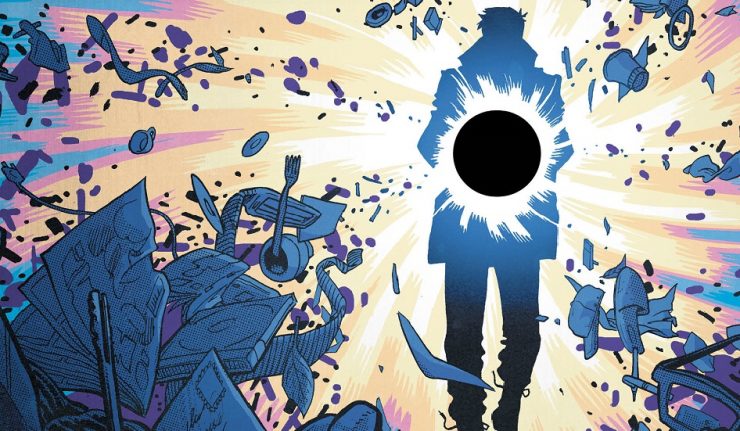 Liam learns the truth about, his Mother, Father and Vanessa.  With help from Mr. Edgar (The Black Hole), he learns how to be a hero and finds a way to begin anew.

Right off the bat, the title, “There is a Light that Never Goes Out,” is a nice nod to The Smiths.

The back story of Liam’s parents turns out to be fairly lengthy and interesting.  This aspect is probably the most compelling aspect of the issue.  Liam’s dad is a real Snidely Whiplash, and how he got together with Liam’s mom would make a good tale in its own right.  This story is untold in the flashbacks, but it’s suggested with just enough to reveal its potential.

Throughout the flashbacks the story of Liam’s mom’s turn as a hero is explored.  While we see how she got the Black Hole from Liam’s father, there’s a lot of unexplored territory that could be developed in future stories.  It’s especially intriguing as to how she became known to so many other worlds.  How did this Earth woman become this hero?

There have been elements in this series from the first issue that have been exciting and interesting.  However, in the second half of the series, it’s become a bit cliched and predicable.  There’s always the chance that it’s just how these type of origin stories go, however, Young Animal has been a little different in their approach to storytelling.  There’s always been an underlying theme that informed the stories.  With Collapser, the story is just not as fresh and different or as insightful as others that have been published under the Young Animal banner.  Think back to last year’s Eternity Girl.

At the outset, I thought this series would be similar in some ways, however, when Eternity Girl went left, Collapser went right.  Eternity Girl did a great job of exploring identity through some great science fiction and the classic comic trope of parallel universes.  There are still some great concepts in Collapser, but they have yet to be fully developed.  The basic powers of the Black Hole are first and foremost.  They are touched upon briefly in Collapser #2, and it is more of this that would’ve really elevated the series into something unique.

Despite falling into a predictable pattern, Collapser #6 retains the potential for a lot more stories.  Though the series doesn’t feel really Young Animal, the basic concept deserves further development.  Unfortunately, this final issue portrays Liam James in an all too familiar way.  We’ve seen this story before, and this issue is unable to take it somewhere else.  Though the story is wrapped up, and Liam learns how to be a hero, his mom’s story may in fact be more intriguing.