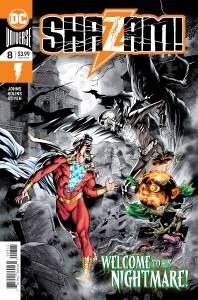 Shazam #8: As Billy Batson and the rest of the Shazam Family are about to learn as they cross over into the Darklands, the Magiclands aren’t all fun and games! In a world filled with all kinds of frightful creatures and haunts, nothing will compare to the horrors of Billy’s own internalised fears.

In Shazam #8, the Wizard tells Eugene and Pedro that the family is vulnerable until the missing seventh member is found. A final seventh member has been hinted at before. There are seven thrones at the Rock of Eternity, and King Kid claimed to be the family’s seventh member. But now the Wizard Shazam is explicitly stating that they need to find someone to fill this role.

But who is it? The image shown of the family shows the missing member in silhouette. The picture seems to imply that the seventh member is a boy and younger than most of the others, but could be of any ethnicity. But is this picture a reliable representation or a generic abstraction? If the latter, this person could be anyone.

At the end of the issue, Billy grants the power to his father, C.C. Batson. However, I doubt that he is taking the seventh slot on the team permanently. Having the father of the group’s leader on the team would throw the group’s dynamic off. I suspect that C.C. Batson’s tenure as a member of the Shazam family will only last an issue or two. 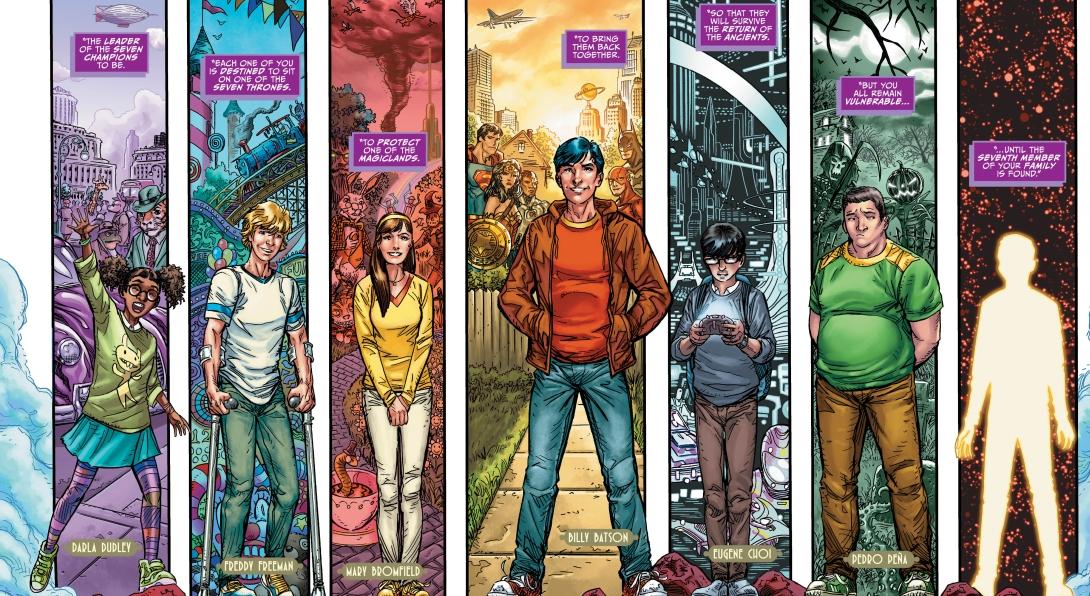 One interesting implication brought up this issue is that Billy can apparently grant and take away the power from the others at will. This could allow for interesting developments in the future. Could frictions within the family cause Billy to replace members of the family with new members? Also, does this mean that Black Adam can likewise share his power with others? Could the family end up facing a Black Adam family at some point?

Finally, the costume that Billy’s father is wearing looks a little… familiar. Does the ‘C.C.’ in his name stand for Captain Carrot? It certainly looks a lot like the uniform of the carrot-munching hero of Earth-26. I don’t know if this was a deliberate nod to Captain Carrot or it was accidental, but it did earn an appreciative chuckle.

On the other hand, I’m also rather disappointed. When last issue teased that Shazam #8 would feature Captain Marvel, I was hoping for a guest-appearance from the Thunderworld hero, who is essentially the classic version of Captain Marvel.

As fun as this title is to read, there is way too much going on in this storyline. There’s the exploration of the various Magiclands, Sivana’s and Mister Mind’s attempts to enlist Black Adam, the return of the Seven Deadly Sins, Billy’s father, and the Vasquez’s learning the family’s secret identities, there is enough material here for three or four different storylines. It’s all very interesting, but Johns really needs to set a little more relaxed pace, to explore each of these story threads in more depth.

The other main problem is the title’s delays. Shazam #8 was originally solicited for July 17th and has finally materialized on November 27th: a delay of 19 weeks! These delays are really hurting this series. With so much being thrown at us each issue combined with such extreme gaps between issues it gets hard to remember what’s going on. I understand that Geoff Johns has a very heavy schedule, but he should stop to consider if maybe it might be better to delegate the title to another writer who has the time to devote to the project. Or maybe he could plot the issue and enlist a co-writer to do the actual scripting.

There’s a lot of potential evident this book, but I really think that it could be vastly improved if Johns were to slow the pace of the story somewhat and not try to cram multiple storylines into a single arc. Dc should consider looking at the continuity in the release cycle of the title schedule if it wants to keep the interest of the readers – even if this means giving the book to another writer.