Review: The Question: The Deaths of Vic Sage #1

Review: THE QUESTION: THE DEATHS OF VIC SAGE #1 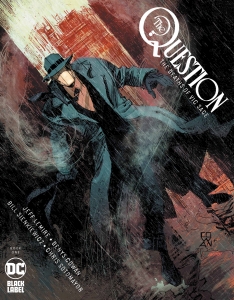 The Question: The Deaths of Vic Sage #1: For years, Vic Sage has worn the faceless mask of the Question to clean up the streets of Hub City by sheer force of will. He knows right from wrong. He knows black from white. But what happens when he is drawn into a conspiracy that reaches from the heights of Hub City power to the depths of its underground tunnels? What happens when things stop being black-and-white and start getting a little gray? And what happens when, in a secret chamber deep beneath the city, Vic Sage meets his own end…and his new beginning? Eisner-winning writer Jeff Lemire joins forces with the legendary art team of Denys Cowan and Bill Sienkiewicz to resurrect Vic Sage, only to destroy him all over again…and again…

One of the best things of Lemire’s question is how it completely recaptures the feeling of Denny O’Neil’s classic series. This is no accident. Denys Cowan, the regular penciller from that series returns, along with Bill Sienkiewicz, who collaborated with Cowan on many of the covers.

The book also retains the same setting and supporting cast, with Lemire clearly wrting to evoke the feel of the O’Neil’s series.

But is this meant to be a continuation of the earlier series or a reboot? It seems to be a little bit of both. The Deaths of Vic Sage #1 refers to events that happened in that series. We briefly see the wheelchair-bound Richard Dragon, who gave Vic Sage martial arts training early in the series.

But it appears to be fairly early into that series. Wesley Fermin is still mayor of Hub City, and Vic has not yet moved on to Gotham city, or met his death as shown in 52 #38.

There are some continuity differences that reveal that this isn’t quite the same continuity. The most notable is that Myra Fermin is now the sister of the mayor, rather than his wife. There are also some more subtle differences, such as howAristotle “Tot” Rodor refers to the Question ‘Vic’. In the original series, Tot insists on using his actual first name ‘Charlie’ instead of his preferred middle name ‘Vic’.

This is more of a soft reboot, set earlier on in a slightly altered continuity. This does raise the question of whether this series is considered in continuity or not. This is a DC Black Label book, which means that it is not necessarily in continuity, but isn’t necessarily outside of continuity. Likely this won’t be decided until future writers of the character choose to stick to this interpretation or contradict it.

I hope it is canonical, though, because it appears to negate the New 52 version of the Question, a mysterious magical being of unknown origin  tied to the Phantom Stranger and Pandora. While Vic Sage was an entirely distinct person appearing in Suicide Squad as a foil for Amanda Waller.

Also, it emphatically negates the depiction of Richard Dragon as a Green Arrow villain. Instead, it reinstates him as the former protagonist of Richard Dragon, Kung-Fu Fighter. Turning him into a villain was one of the many egregious mistakes of the New 52 era, and I’m happy to see it expunged from canon.

However, Vic has appeared in other DC books recently, affirming that he had died, but not explaining how he had returned from the dead.

It is quite possible that this series intends to explain that, as we see Vic discovering a long dead body wearing a similar mask to his own. And later, with the assistance of Richard Dragon, he relives this earlier life.

Given that Vic has lived at least this one previous life, and that the title refers to his deaths in plural form, it seems that Vic may be caught in an ongoing cycle of death and resurrection. This would provide a neat explanation for how Vic’s appearances in Brian Michael Bendis’ Superman books when he’s supposed to be dead.

I would find it disappointing if this series doesn’t maintain its momentum. Bendis has effectively negated the New 52 changes to Vic Sage, but it’s still possible that the New 52 Richard Dragon exists in the Rebirth DCU, as nothing has appeared that contradicts that version so far. However, the canonicity or lack thereof does nothing to detract from how awesome this series is. 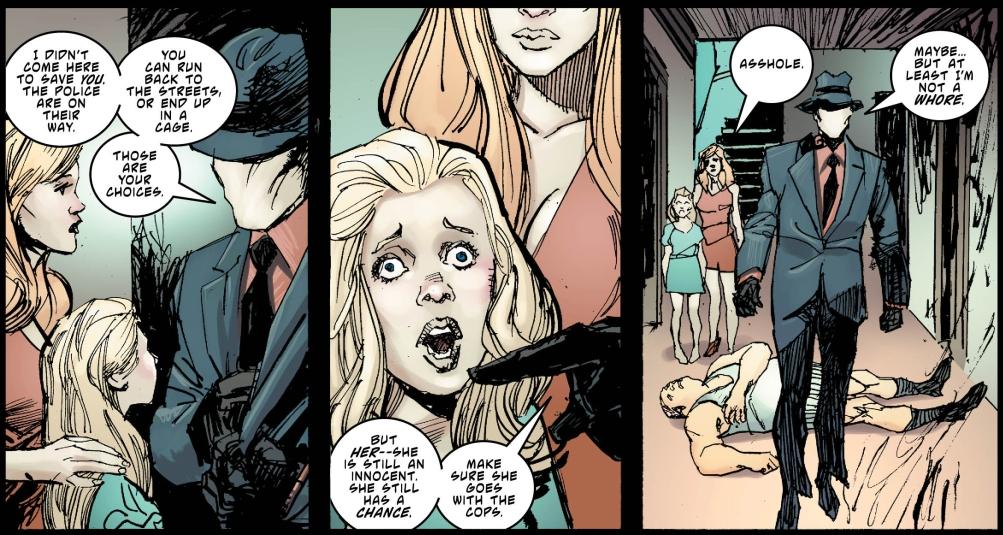 This miniseries is a dream come true for fans of the Denny O’Neil’s classic Question series. There are some minor changes and apparently a major expansion of the character’s mythos. But Lemire does a remarkable job of recapturing the spirit of the 80s classic. DC should strongly consider spinning a new ongoing series from this mini.