‘Deathstroke’ Series To Debut This Monday 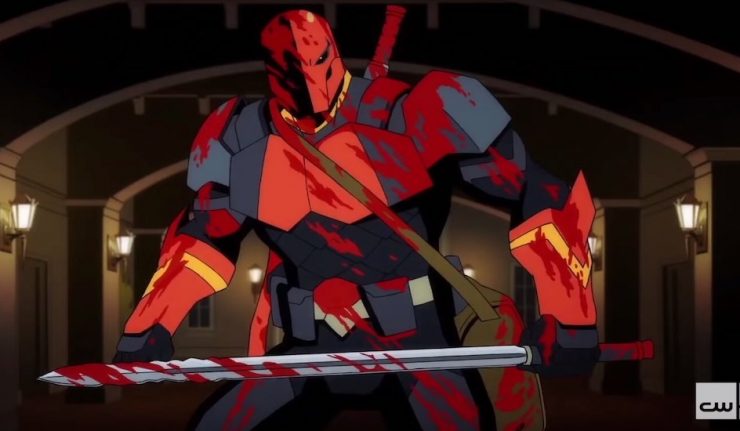 For those of us who aren’t “in the know” or just “in the dark” after being swamped with news of new DC movies and nonstop news on some crisis in the DC Multiverse (and you are not alone since I am one of these people) the brand new Deathstroke animated series is set to debut on The CW Seed this Monday; January 6th.

Yes, you read that correctly.

Deathstroke: Knights and Dragons will feature on the free streaming service from The CW entitled CW Seed.

This release date was revealed in a very, very brief video that spans a grand total of five seconds.  The clip consists of Deathstroke in a static image of the assassin cutting his way, in pure Slade Wilson fashion, thru a bunch of H.I.V.E. goons which is followed by the shows logo and the release date.

Don’t believe me?  Well you can watch the clip below just to make sure.

#Deathstroke is coming. Stream free on January 6 only on CW Seed. pic.twitter.com/Fw4rbjsTGU

The CW Seed is a free streaming platform that can be accessed from Apple TV, Roku, Chromecast, Amazon Fire TV, Kindle, Xbox One, iPhone/iPad (iOS 9 or higher) and Android devices

According to the synopsis for Deathstroke: Knights and Dragons:

“Ten years ago, Slade Wilson-aka the super-assassin called Deathstroke- made a tragic mistake and his wife and son paid the terrible price.  Now, a decade later, Wilson’s family is threatened once again by the murderous Jackal and the terrorists of H.I.V.E.  Can Deathstroke atone for the sins of the past-or will his family pay the ultimate price?”

There is no doubt that this series is going to be a major hit with DC fans especially those of the DCAU.  Deathstroke is a great antihero who’s past affiliations and desire for vengeance will drive this series for a long time, maybe even drive it over to the DC Universe streaming service or HBO Max, when that stream debuts in May.

If you still aren’t convinced ahead of the Monday debut then just remember, it is streaming on a totally FREE service, so there’s that.