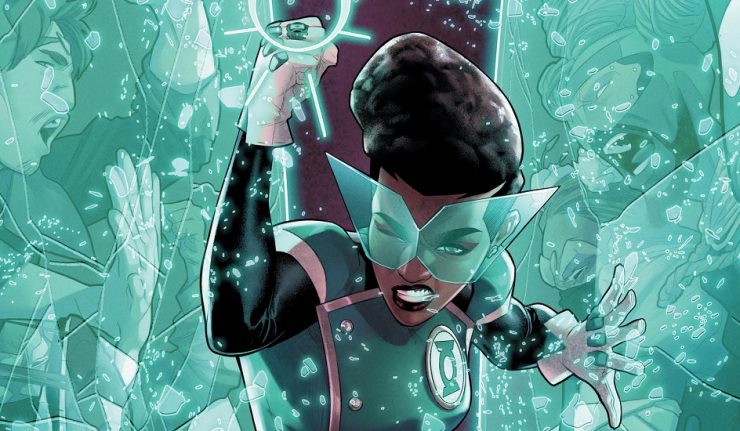 After an awkward encounter with Councilor Marth, Jo is called to a protest.  As she attempts to provide some common sense to the civil unrest, Jo finds finds herself  in the middle of a situation that recalls the Civil Rights Movement in the United States.

There’s definitely something going on under the surface.  Jo can feel it, and it’s a mystery that Jemisin is allowing the reader to discover along with Jo.  It’s apparent in Councillor Marth as well as the bizarre situation with the protest at the end of the issue.

The protest that takes up the second half of Far Sector #3, starts out seeming like one thing, and ends up adding a whole different flavor to the story.  Part of this issue depicts some of Jo’s life on Earth before becoming a Green Lantern.  These memories inform Jo’s experience and how she relates to and interprets the protest.  There is another bit that is somewhat vague, but it appears that Jo herself was once on the receiving end of a police baton at some point.  Added to this are images of the Manzanar internment camp and the Nixon/ Agnew ’68 campaign button.  When the police open fire on the protesters, Jo realizes the situation has gotten out of control and it leaves Jo questioning the motivation of the local police and Councillor Marth.

Jamal Campbell’s art and colors continue to make Far Sector a unique place that fits the world that Jemisin is building.  Campbell’s palette is limited to greens, blues, whites and pinks.  The world and races themselves that Jemisin is developing are quite different and work well as part of the mystery unfolding around Jo.

If there’s anything out of place, the names and places of this world are slightly difficult to follow.  Like old issues of the Legion of Super-Heroes that would give an entry from the Galactic Encyclopedia to keep readers up to speed, Far Sector would benefit form something similar.

Far Sector #3 is another effective addition to Jo Mullein’s story.  There’s just a hint that it’s moving a tad too slowly with a bit of confusion over the alien places and names.  However, there are deeper themes that Jemisin is bringing. They not only expand the scope of the tale, but provides a real world element to the unfamiliar outer space world that is this books milieu.