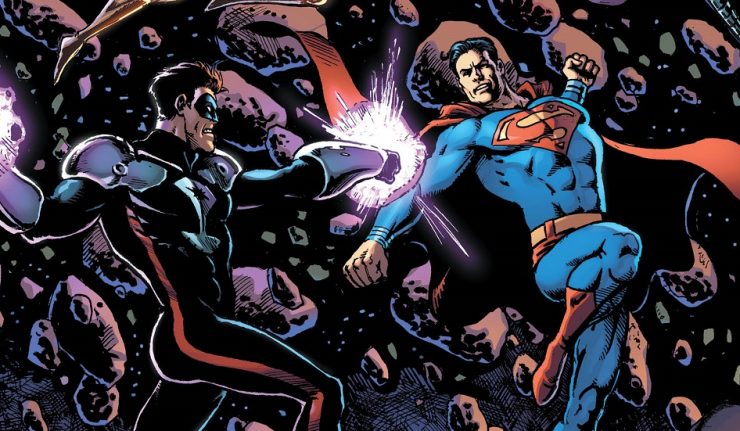 Superman leads the heroes of Earth against the Blackstar hordes!  But, Jon Kent ends up standing in his father’s way…and Hal’s inability to follow authority proves to be the Blackstars undoing as he reveals the trick up his sleeve!

The opening pages provide the first positive as the heroes Superman leads includes characters not seen for a while, including Atom Smasher and Power Girl.  That could’ve been a clue to the twist that is revealed later.  Morrison does set up a confrontation between Superman and his son, Jon, leading the reader to believe this will be a turning point in which Superman brings down the Blackstars, but instead, Jon sides with his new masters.  This proves to be a startling moment that sets up Hal for an even bigger twist in the finale.

As Hal continues his play, it becomes apparent that something really unexpected will have to happen in order for Hal to save the universe this time.  The Blackstars seem unstoppable and Belzebeth apparently has Hal figured out.  What could possibly turn events in Hal’s direction?  To sum it up quickly- he’s tricked Belzebeth in a couple ways, the last being a twist of Silver Age proportions.  Hal and Belzebeth are in a universe of his own creation, he didn’t rewrite the universe!!

Finally, Hal remains Hal throughout everything.  t’s been a bit difficult imagining how he would get himself out of this situation, and commendably, Morrison plays off Hal’s personality and characterization to drive his solution.  Also,it ties in very nicely with the end of the first 12 issues of The Green Lantern.

The only real negative is the delay since the last issue came out back in the beginning of December.  While it’s just a delay of a few weeks, the immediacy of this series exacerbates a delay.  Otherwise, the only other thing that comes to mind is the moral quandary created by having Hal create a universe.  While Hal appears to save his own universe, has he doomed this one?  As creator of a universe, what moral obligation does he now have towards it.  In  a sense it seems as if he’s created it knowing it’s disposable.  It does have a very Silver Age feel to the twist.  With that said, the twist has the same kind of Silver Age irresponsibility of unintended consequences that one might expect to find in a book from that era.

Morrison does a great job providing misdirection from Hal’s actual endgame.  It sets up his twist wonderfully and allows Hal to pull out a victory all stemming from the character traits that define Green Lantern 2814.1.  Green Lantern: Blackstars #3 is a worthy finale to the interlude between seasons one and two of The Green Lantern.