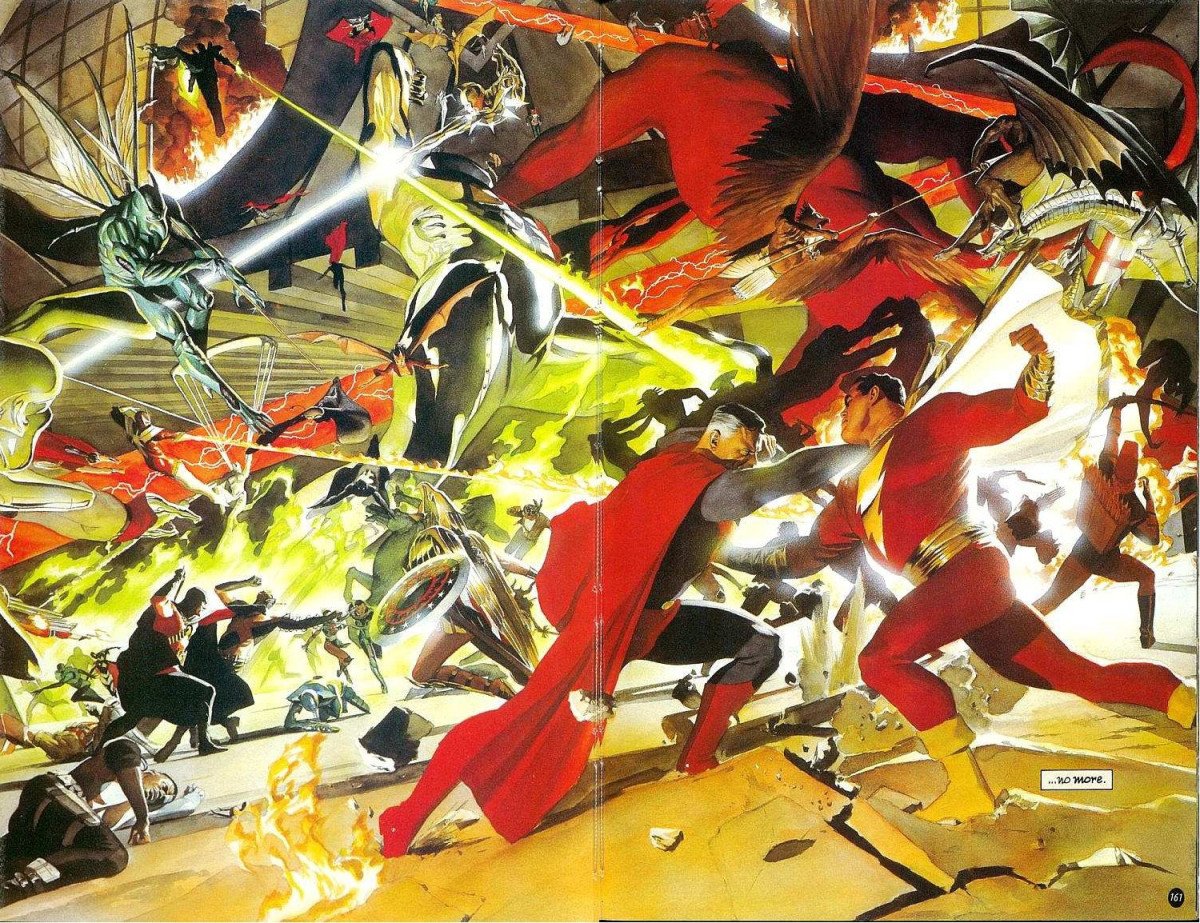 When Alex Ross paints a scene you can feel the wind and the heat jump off the page. His statuesque interpretations of DC heroes radiate immense levels of energy and presence through his use of bold colors contrasted with bright lighting and extreme shadows. AR creates battle scenes that rival historic war paintings, as we see in the above image from the Ross masterpiece KINGDOM COME (1996).  Try to fathom the hours, weeks and even months of work it must have taken Ross to complete a 382-page-story full of high quality work such as this. Or just stroll down casually through this profile of a master artist.

Born in Portland, Oregon on January 22nd, 1970, Nelson Alexander Ross was drawing at the age of 3. Influenced by his artist mother, and showing promise, academy study was an obvious choice, and by age 20 Alex had broken into the comic book industry.

Creating statuesque forms akin to that of a 1950’s athlete are AR’s forte. Every drawing I’ve ever seen communicates the strength and charisma you’d expect from a self proclaimed, caped hero. But Ross makes no pretense to being a landscape artist. The human figure is clearly his only obsession. His backgrounds can be very simple – even sloppy, but you would never notice them because of the colossal forms in the foreground, each drawn with the attention to anatomy of a renaissance sculptor.

Sometimes AR’s work can be a little haunting. Like a wax museum line up of beings from another plane of existence… watching you. Judging you. More than any other artist, with Ross I truly feel like I am standing before a more evolved specimen of human being. 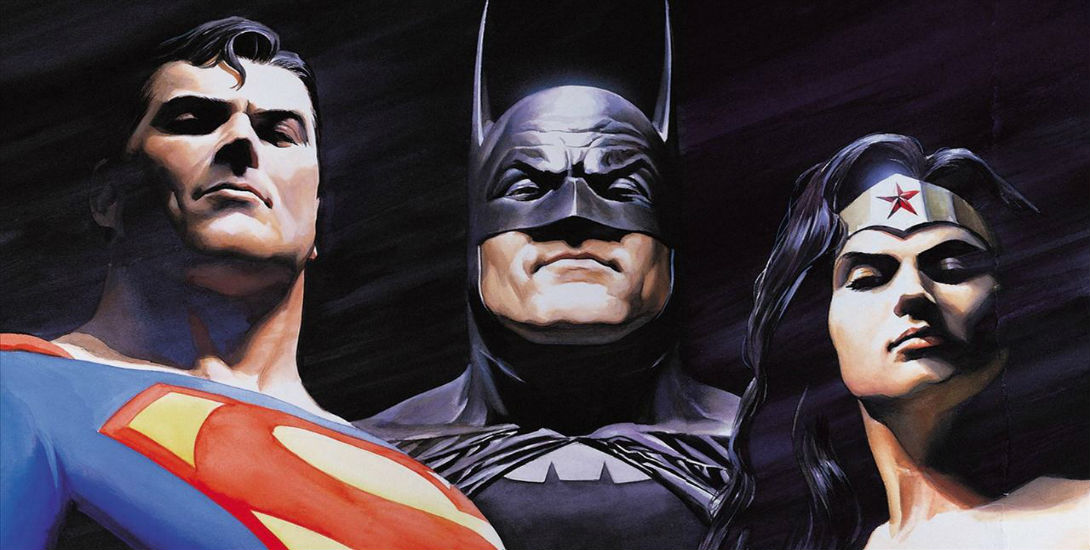 Notice how Batman‘s cowl looks oily. And Wonder Woman‘s gaze is so powerful that it immediately eliminates any prehistoric ideas of gender inferiority. Through the lens of Alex Ross we are witnessing living legends. Super people. Perhaps even gods. Each portrait is of a consistent and superior quality to that of most artists. Any could be used as a cover. 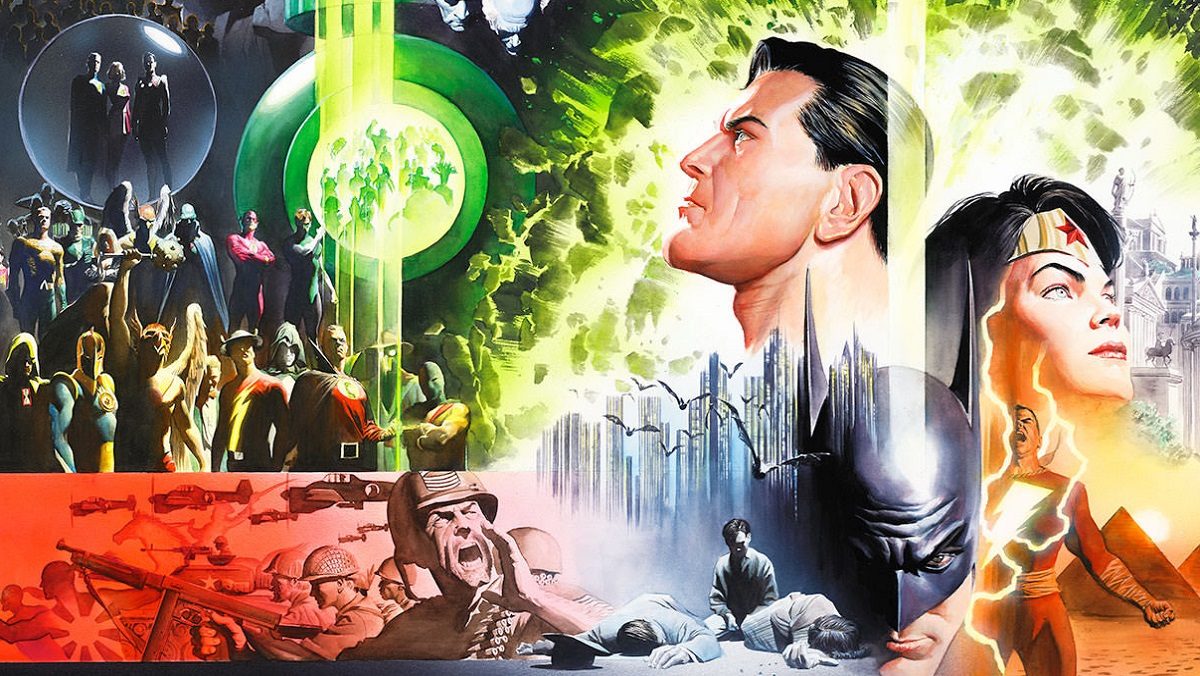 An unmistakable feature of AR’s artistic personality is his use of light. Bright spotlight flashes are almost always present. 90% of the time this drastic illumination is right on the edge of becoming over saturated, like when that outdoor photo you took gets white washed and loses detail – but Ross keeps this tendency dialed back just enough to keep it complimentary. Except when conveying super powered energy effects, then Ross unleashes a blinding light that communicates power like we have never seen.

Dreamlike. Magical. Quasi-religious. When Alex Ross paints the heroes of the DC Universe they appear like the arrival of an angel, bathed in holy light. His villains carry with them the most severe sense of dread and doom. His humans communicate the inevitable suffering and loss that come with being caught in the crossfire of these unearthly titans.

This Artist Profile is the second in an on-going series of critiques and commentaries on my favorite artists. Less biographical, my analysis focus predominately on artistic style.