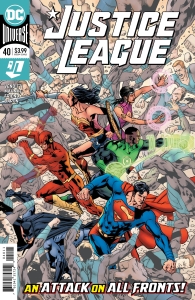 Justice League #40: The next chapter for comics’ premier superteam begins! An unexpected arrival from the stars brings a dire warning to the Justice League: A new breed of conquerors is on the march. Led by Superman’s nemesis Eradicator, a genetically engineered, super-powered strike team has come to subjugate Earth. To aid the Justice League, Batman makes the unprecedented decision of enlisting an ancient, unrivalled power, which calls into question who, exactly, is in charge. With the League on unsure footing, will they be ready to save the world?

With Justice League #40, Robert Venditti takes over as writer from Scott Snyder. Snyder’s run will be a tough act to follow. But Venditti starts off with a strong first issue that shows he’s up to the task.

The story starts with a Daxamite crashing to Earth. The Daxamite turns out to be Sodam Yat, a former member of the Green Lantern Corps, and he comes bearing word of an impending invasion of Earth by the Eradicator and an army of Daxamites.

Venditti is artfully using the Superman mythos to provide a threat worthy of the World’s Greates Superheroes. Daxamites have long been established as being nearly identical in power level to Kryptonians – so much so that DC’s first Daxamite character, Mon-El, was mistaken for Superman’s brother.

And where typical Daxamites are vulnerable to the element lead, these Daxamites have had that weakness removed. So, the League is facing an army where each soldier is the equal of Superman, but with no “Kryptonite” that can used against them.

And why have these Daxamites set their sights on Earth? The Eradicator, a Kryptonian humanoid device that, in Superman’s words, is “programmed with the single-minded purpose of ensuring the survival of the Kryptonian race. 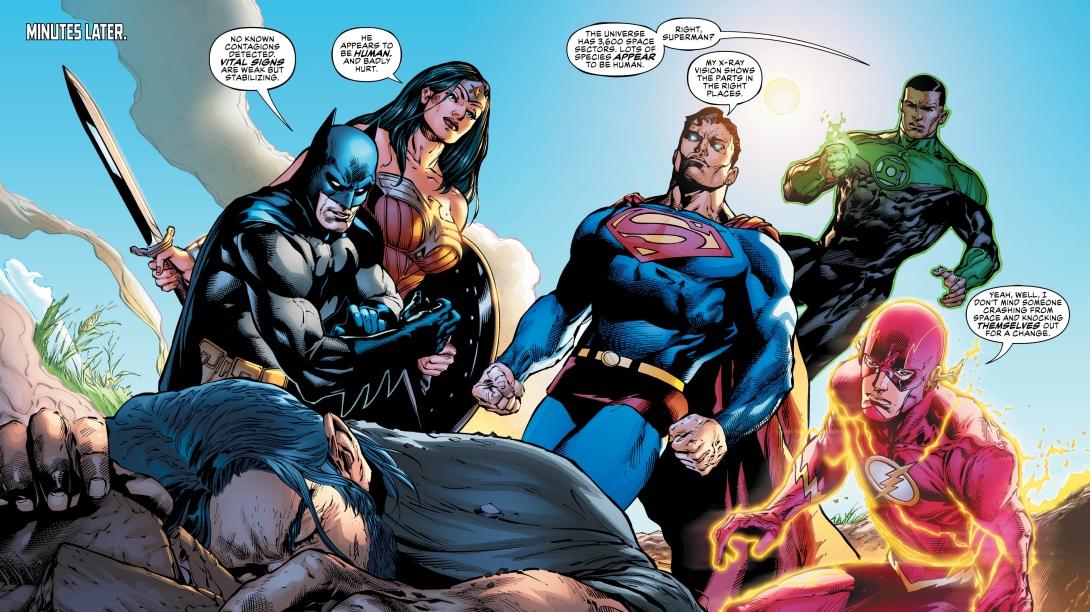 At first it seems an odd to mix the Eradicator in with Daxamites, but it makes sense when you consider that Daxam originated as a colony of Krypton in the current continuity. The Eradicator has been rejected by Superman and Supergirl, so it likely decided that Daxamites were practically the same thing as Kryptonians. Though, I do wonder why it didn’t go after Zod and the recently founded colony of New Krypton.

So, if Daxamites don’t have a Kryptonite, the League needs to try Superman’s other weakness against them, magic. This prompts Batman to seek out the aid of Madame Xanadu while the rest of the team faces the Eradicator and his Daxamite army.

Venditti shows us some interesting character interactions – some touching and some disturbing. We see Superman and John Stewart having a nice heart to heart, where they discuss Superman’s recent revelation of his secret identity, as well as Batman’s loss of Alfred. Not only does this nicely show that this book is tied to events in the characters’ own books, but it also gets into how the characters feel about their feelings. Superman is wondering if anyone will ever think of him as “a guy from Kansas and not an alien from Krypton” again. And John is feeling that.

And they discuss their concerns about Batman. John seems to think that Batman is “in a tiff”, where Clark sees to the core of the matter. Bruce is still working through his grief for the loss of Alfred. And where John thinks Batman has an ego problem, Clark realizes that it’s actually a matter of trust. 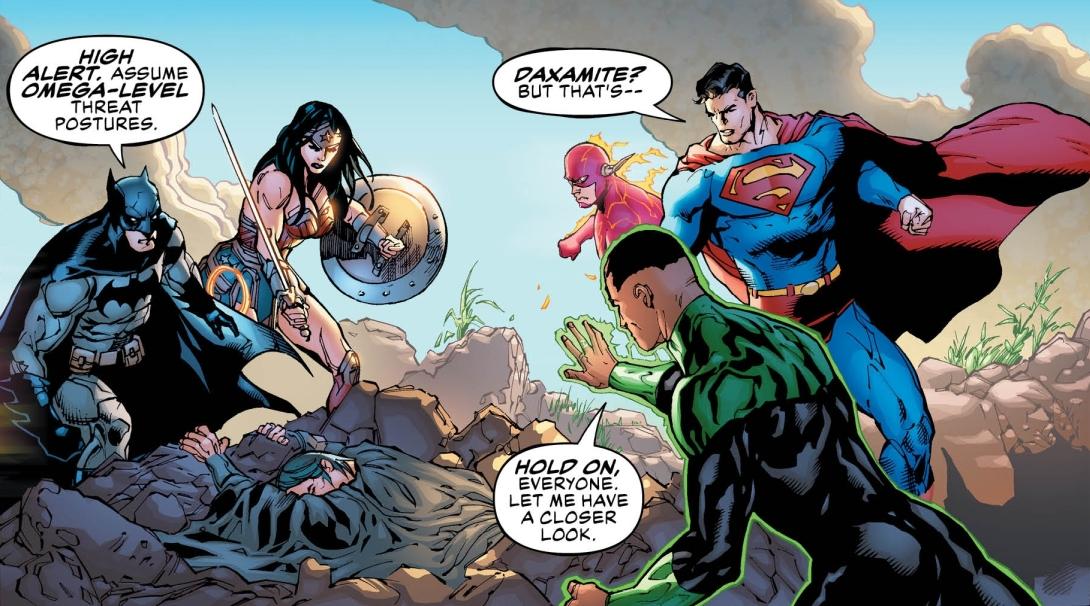 However, the interaction between the Flash and Wonder Woman is rather unsettling. Barry uncharacteristically hesitates during the encounter with Sodam Yat. When Diana later questions Barry about this, Barry reacts with some indignation. This leaves us wondering what is bothering Barry. And will this be a cause of friction between him and Diana?

The choice to end Snyder’s run on a cliffhanger to be resolved later, followed by a new issue a week later with a new story by a different creative team is somewhat jarring. I can’t help but feel that DC could have figured a smoother way to make the transition. However, Venditti bears no fault for this, so I don’t feel that it would be fair to hold it against him. This story is best considered as if it were a the first issue of a new series, rather than a continuation of Snyder’s series. And Justice League #40 serves admirably as a first issue, even if it technically isn’t one.

One minor quibble I had was with a sequence with Batman approaching London in the Batwing. Batman appears to have a short conversation with Alfred on a video screen. Yet, not two pages later, Superman mentions that Alfred has died. This scene confused me at first. Was Bruce hallucinating conversations with Alfred? Was this a flashback? Or has Bruce recently created the Alfred A.I. that we have seen in the Batman Beyond future?

Fellow DCN reveiwer Matthew B. Lloyd reached out to Robert Venditti, and received his response, “That one panel is a flashback. Batman is remembering how he used to talk to Alfred during missions, but now he can’t. He’s all alone now”.

The panel in question is coloured with a green glow emanating from the monitor as opposed to the the red glow in the two panels before and after it. However, I interpreted this as just a change of the colour of the screen from the screen’s default red colour to a green colour when Alfred was on the line. It doesn’t help that the scene is nearly identical in every other respect, including the background scenery outside the window.

Or perhaps I just was trying to read too much into the scene. In any case, it’s only a minor quibble. Many thanks to Robert Venditti for promptly clearing up my confusion.

While the Justice League #40 might come as a bit of a jolt to anyone hoping for some sort of resolution or at least acknowledgement of the previous issue’s cliffhanger, it serves as a great intro to a new era for the title. Also, the dissociation from the previous run makes this an ideal jumping-on spot for new readers. I have high hopes that with Venditti as writer, some great stories lie ahead.