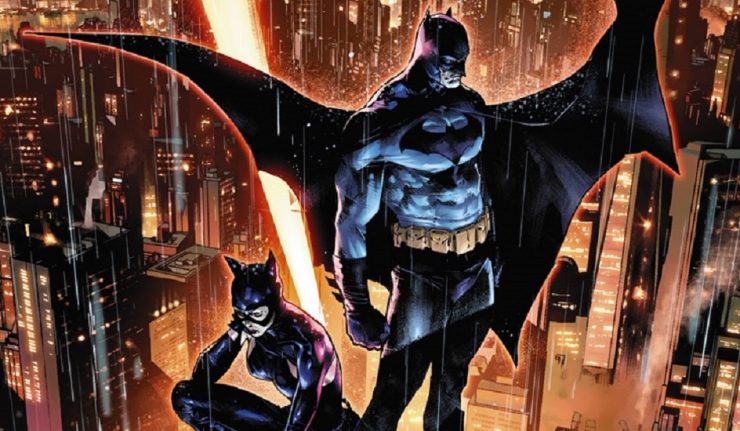 “We’ve got a sneak peek into the future to see what Batman #90 will look like next month! While Batman #88 is hitting shelves today with artwork by Guillem March and Tomeu Morey, Jorge Jiménez and Morey will be handling the interiors for Batman #90 ahead of launching “Joker War” with May’s Batman #95. Attached are inks by Jiménez next to Morey’s colors to show their collaboration and craft. Thanks for taking a look!” –Clark

In the latest chapter of “Their Dark Designs,” the mysterious master criminal known only as the Designer once brought together Gotham City’s greatest criminals to plot the perfect crime, and now his plan has been unleashed upon the city in all its might. Batman will go to any length to uncover the grand design, but Catwoman is the one who holds the greatest secret. If Batman wins against the Designer, he will lose everything!
Check out Jiménez’ interior inks in this first look at Batman #90 —featuring Harley Quinn, Catwoman, the Designer, the Joker, Riddler, and Penguin—next to Morey’s colors, to see what’s coming up soon for Batman!

Batman must stop Deathstroke from killing the mayor of Gotham City! But to do so he has to figure out who ordered the hit in the first place. If his four main suspects aren’t ’fessing up to the crime, then is there someone even more sinister lurking in the shadows waiting to deliver the coup de grâce? Whoever it is, one victim will fall under their attack!