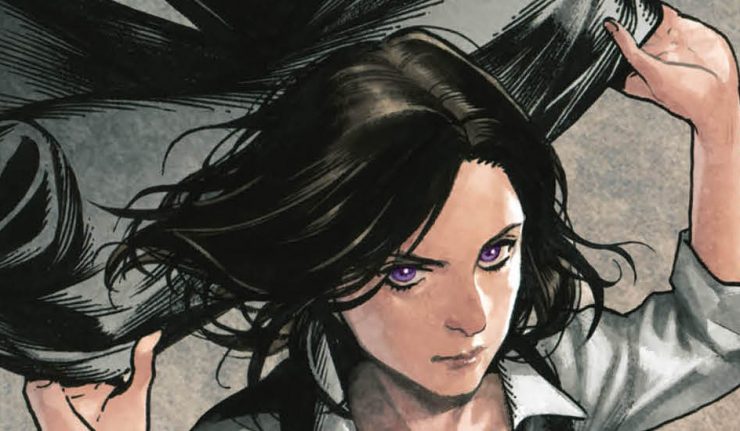 As the world comes to realize Lois Lane is also the wife of Superman and mother of Superboy, the DC Universe’s most acclaimed reporter finds herself hunted by a deadly assassin code-named the Kiss of Death. The only thing standing between Lois and execution is the Question, but can Renee Montoya stop the Kiss before she fulfills her contract?

Mike Perkins’ cover is very cool. This issue takes place after Superman has revealed his identity so it’s fun to see that imagery played with. And if someone doesn’t know that, the cover is a clever way to set that up.

I love the artistic style both on the cover and in the interiors. This book looks very well. The noir influence creates an engaging vibe. Gabe Eltaeb’s colors are really great. I love the mood and energy.

This Lois Lane series has been strangely affected by DC continuity. If it was an ongoing, I would understand. But it’s a 12 issue story. So Superman revealing his identity resolves the press attacking Lois subplot. Because of a decision made in another book, part of this story doesn’t really get resolution and ends up feeling pointless.

Kiss of Death’s banter is strange. She just weirdly tries to flirt to Renee the entire time. Conceptually, I could see how that could be a fun dynamic. But it comes across a little awkward and I think it clashes with the tone a little bit.

The story feels so padded at this point. I love the style and there is a lot of good writing. But I don’t feel a lot of momentum. I’m not really invested in the plot. The issue is mostly an action scene followed by quirky humor with Superman. And that Superman stuff is funny but it’s not what I’m here for.

I didn’t love this issue. It’s fine; the art is great and the dialogue is fun. But nothing else really grabbed me. This whole series has felt strange lately. I loved it early on but I’m not sure where it’s going and I don’t know if I care anymore. It is by no means bad but it’s disappointing to me.