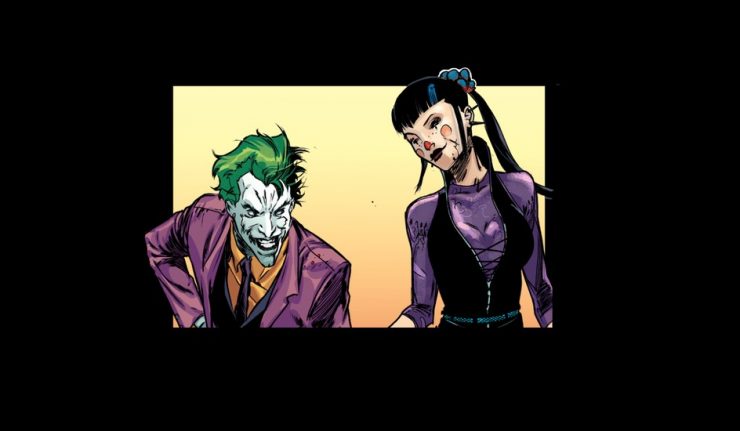 Get ready for Punchline!

Appearing in Batman #89, Year of The Villain: Hell Arisen #3, and beyond!

A brand-new DC villain set to play a major role in Batman’s life is already generating buzz and press interest…but who is Punchline? Writer James Tynion IV has teased her appearance in a few upcoming issues, but as of yet we don’t know much about the brand-new character! Here’s the breakdown of where you’ll be seeing her ahead of Batman #95’s “Joker War” storyline!

The mysterious character is said to “play a major role in Batman’s life,” and is expected to have a considerable role in the coming “Joker War” storyline. There hasn’t been a ton of details released about that story arc, but with the Joker gathering intel about the real-life identities of the Bat-Family, and new artwork suggesting a Joker will unmask Batman in Detective Comics #1023, you can bet things are only going to get wilder from here. Punchline will play a crucial part in what comes next for both the Joker and Batman, so it’s no surprise she’s already spinning off into other DC Comics titles. There’s a ton of potential with the character.

The mysterious new villain pops up on February 19 in a one-panel cameo in Batman #89; art by Guillem March and Tomeu Morey:

One week later, Punchline makes her full-on debut as the Joker’s latest—and deadliest—henchwoman in Year of the Villain: Hell Arisen #3; art by Steve Epting & Javier Fernandez with color by Nick Filardi: