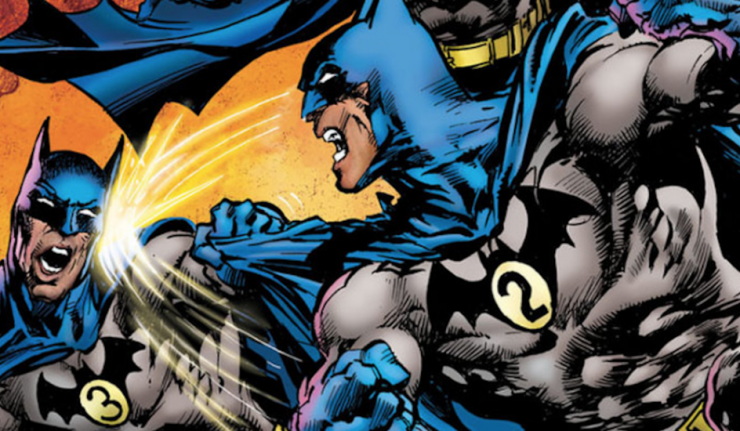 Fans of two current DC miniseries — Batman vs. Ra’s Al Ghul and Inferior Five — got some bad news when DC canceled retailer orders for the final two issues of each.

Though the publisher indicated that  “resolicitations of these titles [are] coming soon,” both have previously been plagued by delays. Inferior Five, by Jeff Lemire and Keith Giffen, also saw its total issue number cut from twelve to six.

Here are the (canceled) solicitations for the four issues in question:

BATMAN VS. RA’S AL GHUL #5
written by NEAL ADAMS
art and cover by NEAL ADAMS
Everyone knows that Gotham City needs Batman—but a shadowy group is running a competition to replace him. Will they choose a man with the necessary skills to keep the people of Gotham safe? Or do they have something else in mind? Either way, Deadman has his own idea of the next steps to take!
ON SALE 02.12.20
$3.99 US |5 OF 6 |32PAGES FC|DC

BATMAN VS. RA’S AL GHUL #6
written by NEAL ADAMS
art and cover by NEAL ADAMS
It all comes down to this…the final meeting of the Batmen! Ra’s al Ghul’s plan to dominate Gotham City crashes against the will of Bruce Wayne and Matches Malone, as the city’s power grid faces the wave of the future!
ON SALE 04.15.20
$3.99 US | 6 OF 6 | 32 PAGES
FC | DC

INFERIOR FIVE #5
written by KEITH GIFFEN and JEFF LEMIRE
art and cover by KEITH GIFFEN and MICHELLE DELECKI
backup story art by JEFF LEMIRE
The danger under Dangerfield: the young heroes have discovered a relic from the Invasion interred deep beneath their horrifying hometown, but will they be as irresponsible with it as they have with everything else? Plus, the Peacemaker arrives on the scene to keep them from hurting themselves and planet Earth!
ON SALE 03.25.20
$3.99 US |5 OF 12|32 PAGES
FC|DC

INFERIOR FIVE #6
written by KEITH GIFFEN and JEFF LEMIRE
art by KEITH GIFFEN and MICHELLE DELECKI
backup story written by JEFF LEMIRE
backup story art by JEFF LEMIRE
cover by HOWARD PORTER
The Inferior Five make their last stand—and since it’s their final issue, it really is their last stand! Plus, is Dangerfield, AZ, going up for sale? It’s not even a nice place to visit, so who would want to live there?
ON SALE 04.08.20
$3.99 US | 6 OF 6 | 32 PAGES
FC | DC
FINAL ISSUE