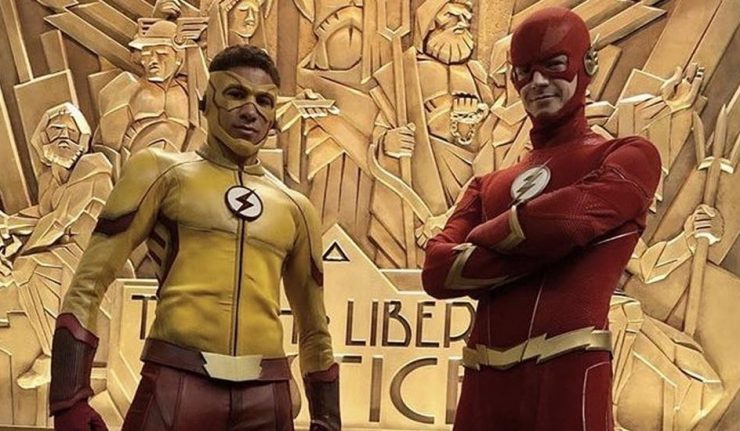 The Flash 6×14 – “The Death of the Speed Force“: Kid Flash returns to Central City with a Zen attitude and new tricks up his sleeve. While thrilled to see his family again, Wally confides to Barry that he returned because he thinks there is something wrong with the speed force. Meanwhile, Cisco returns from his fact-finding mission across Earth-Prime.

The title of The Flash 6×15 should sound familiar to readers of The Flash comic book. “Death of the Speed Force” is the title of a story arc written by series writer, Joshua Williamson.

I really enjoy it when The Flash TV show borrows concepts or characters from the current comic series. Often, comic-based TV shows or movies take the core concepts of the original and go off on their own direction. The fact that the writers of the TV show are faithfully following the comic is reassuring. It’s too often that those adapting a property have no respect for their source material.

As the title indicates, something is very wrong with the Speed Force. Unfortunately, while the Speed Force did not actually die in the comic story, the title proves to be very literal for the TV show. This is bad news for Barry and Wally. With the Speed Force gone, they only have a residual amount of Speed Force energy left. Once that is depleted, that is the end of their super-speed powers. Thus, they have to use that reserve as efficiently as possible, not wasting a bit of it.

The series’ biggest bad guy, the Reverse Flash returns. Cisco discovers that Nash Wells is somehow possessed by Eobard Thawne. Thawne makes a revelation that also borrows from the comic when he lets slip that he has created his own Speed Force, which Barry dubs the Negative Speed Force. The possibilities this creates are intriguing. Perhaps the Negative Flash might be the next character to make the leap to the small screen?

This revelation gives Barry an interesting idea. He asks Cisco and Caitlin to help him build his own artificial Speed Force. Is that even possible? It sounds like a plan that could go very wrong.

I also found it interesting that in both versions of “Death of the Speed Force”, that a Flash is responsible for damaging the Speed Force. However, the way in which the damage was done is very different. In fact, it’s not even the same Flash who is the cause. In the Comics, Wally was tricked by the Reverse Flash into deliberately breaking the Speed Force. Here, it turns out that Barry did so accidentally during the Crisis by using the Spectre’s energy to access the Speed Force, fatally corrupting it.

Ironically, it’s Wally that takes Barry to task for doing so. Thankfully, the level-headed Joe West talks some sense into Wally, and the falling out between the Flash and Kid Flash doesn’t last very long. I would hate to see a major rift between Barry and Wally. Although, a “Flash War” episode might prove interesting.

The Flash 6×14 also has a few scenes dealing with Iris’ imprisonment in the Mirror Master’s Mirror Dimension. The most notable scene features Cisco’s girlfriend Kamilla being shot by Iris’ doppelganger. I hope this didn’t kill her, but that she’s just been imprisoned with Iris.

The Flash 6×14 is a great episode which has some major implications for the rest of the season. Or maybe next season, depending on how long the CW hiatus lasts. I hope we don’t have wait too terribly long to find out how the story pans out.