U.S. Military Will Go After Swampp Thing In Giant 4

Looks like Swamp Thing will face the might of the U.S. Military in the upcoming Swamp Thing Giant #4. The description is as follows:

The contents and cover to April 23’s Swamp Thing Giant #4 have been revealed by DC. The writer/artist duos of Mark Russell/Marco Santucci and Phil Hester/Tom Mandrake are both back with new standalone stories, as well as more reprints.

In the 16-page lead story, Russell and Santucci follow Swamp Thing as he’s being pursued by the U.S. Military (sicced on him by Avery Sunderland).

“From swamp to city they’ll hunt him, and while their target tries to keep the innocent from becoming collateral damage, the same can’t be said of his pursuers,” reads the story’s description.

Hester and Mandrake follow that up with “Toys on Parade,” an 8-page short picking up on their work in previous issues.

“Deep in the bayou, Swamp Thing continues to follow the fifolet, despite not knowing the mysterious spirit’s ultimate destination,” describes DC. “On his way he encounters a strange and powerful girl locked away in the swamp, with magical friends and a monster at her door.”

Check out the cover below! 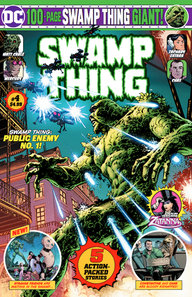