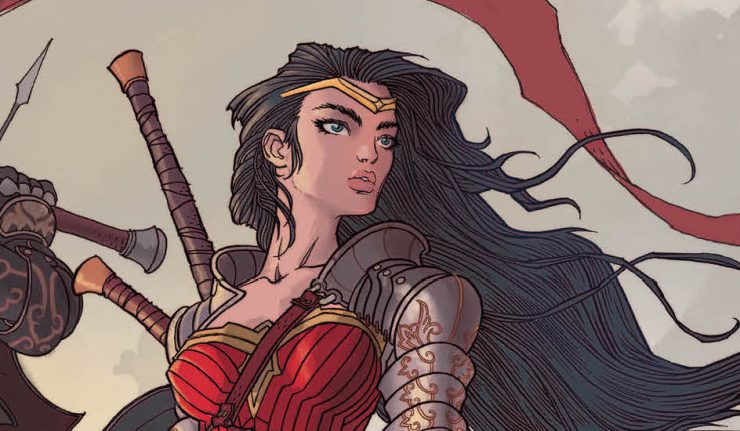 Just when she thought her troubles were over, Wonder Woman is thrust into a new adventure that takes her out of this world! Princess Maxima, the former ruler of the planet Almerac, has crash-landed on our hero’s doorstep and is desperate for her help. Maxima’s people are victims of a vicious lie, and only the truth she’s discovered will set them free. With Wonder Woman by her side, can she retake her throne and bring back the planet’s peaceful matriarchal society? Back on Earth, there is no peace…only Warmaster! The vengeful villainess has obtained a weapon of mass destruction that can wipe out the Amazons for good!

The cover by Robson Rocha, Danny Miki and Brad Anderson is very good. I like the simplicity of the background that allows Wonder Woman and Maxima to stand out. The level of detail is nice. And I like how fierce the two look; both characters look great.

I like the interior art a lot too. It has a fun style. The characters are expressive. And Romulo Fajardo Jr.’s colors are great.

I like the main story of this issue. Maxima is set to be queen of her home world but typical custom dictates that she has to marry a person she doesn’t want to; he also happens to be a crazy person which also informs the decision. Stories in which someone has to avoid an arranged marriage to a jerk are pretty typical but it’s executed well. And I like the addition of adding a gay tint to this story. I enjoyed it as a self-contained story.

The elements I don’t like have to do with the scenes that don’t deal with the main plot. There’s a scene with Donna that doesn’t amount to much; Steve Orlando obviously wants her to play a part eventually so he keeps reminding the reader that she exists. But it feels like a more of a distraction. And I’m a little tired of Warmaster forming her metal band while Diana is on completely unrelated adventures.

This is a really fun issue. It’s a familiar premise but executed well. I like seeing Diana go to outer space and fight on an alien world. It’s a fun break and I like the self contained nature. My issues are minor and don’t take away from my enjoyment that much.