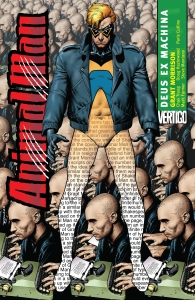 Grant Morrison revels exploring the cracks and crevices of the DCU’s various realities. In fact, DC enlisted Morrison to define their Multiverse for the New 52 era in The Multiversity in 2014. But Morrison’s first explorations were in his ground-breaking run in Animal Man. Morrison wrote the first #26 issues of the title in its pre-Vertigo days, back when Buddy Baker still wore his orange costume.

Morrison’s run not only deconstructed the character of Buddy Baker, but DC’s cosmology itself. Morrison’s Animal Man came out a few years after Crisis On Infinite Earths had reduced the Multiverse to a single universe, but did Morrison let that stop him? Absolutely not.

One thing that I love about Morrison’s approach to DC’s cosmology is that he does not shy away from the fact that the stories are taking place inside a comic book. Our world is not just one world in the Multiverse where DC’s writers and artists are somehow tuned into another Earth where the stories happen, but the stories actually happen in the shared imagination of creators and their readership.

Morrison introduces the character of James Highwater, a doctor at Arkham Asylum, who tends to the Psycho Pirate – the only person who remembered the Multiverse that had existed before the Crisis. Highwater takes Buddy on a spirit quest that kicks off Buddy’s exploration of a number of strange places.

Buddy’s first revelation about the nature of reality is a peek through the fourth wall. He looks directly into the reader’s eyes, declaring, “I can see you!”. Buddy also muses on odd occurrences that only make sense if you know that he’s a character in a comic. Plotlines are forgotten about and not brought up again. There are strange gaps in his perception: “Why is my life so… so disconnected? One minute I’m at home, the next I’m in the Faroe Islands or in Paris and I think I remember how I got there but I don’t really know”. If you think about it, this is exactly how the gap between issues must seem to the characters in a comic book. 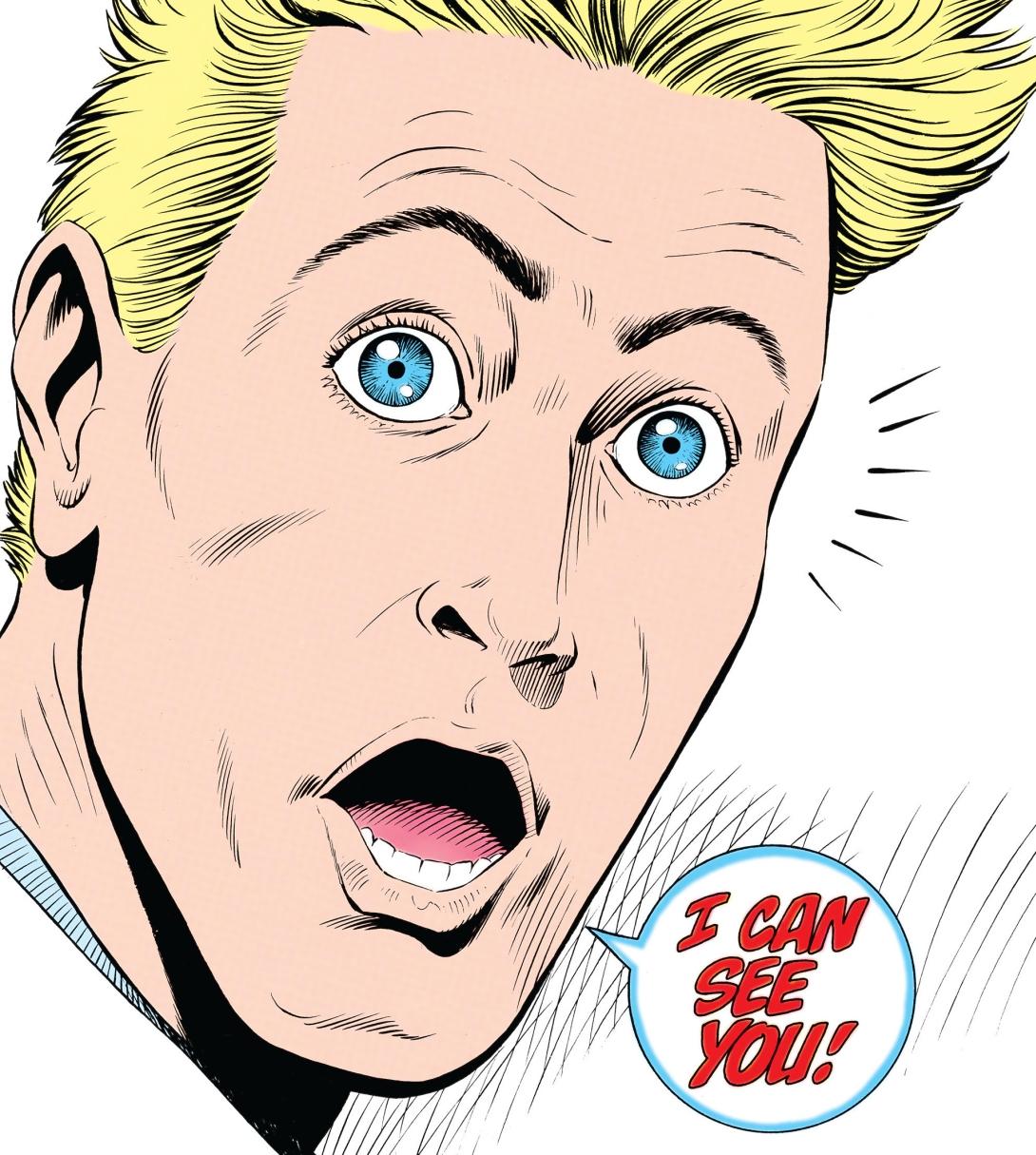 But even more trippy is when Buddy actually manages to literally step outside of the comic panel into the whitespace on the comic page. To me, this seems akin to a science fiction story where a two-dimensional being finds itself thrust into the third dimension.

But the shock of these revelations is nothing compared to the shock awaiting him when he returns home, where he finds that his wife and children have been murdered. Morrison does a great job of showing Buddy’s reaction of this, going through stages of shock, denial, and finally anger. With the help of Mirror Master Evan McCulloch, Buddy sets out to seek revenge on the hitman and the evil organization that employed them.

I find it interesting in retrospect that Buddy’s black leather costume he dons at this point is rather similar to his costume in the New 52/Rebirth continuity. However, I would love to see a return of the classic orange costume.

The next of Buddy’s Strange Adventures, is into the past, as moves to the bargaining stage of grief. This takes the form of his idea to travel into the past to save his family. Unfortunately, the time machine he borrows from Rip Hunter doesn’t work quite right. He finds himself nearly invisible and immaterial, unable to affect the past enough to change it.

However, I do love how Morrison dovetailed Buddy’s actions in the past with creepy occurrences shown earlier in the series. Several unexplained events are now revealed to have been a time-displaced Buddy trying to warn his family.

In the past, Buddy meets a trio of DC’s immortals: the Phantom Stranger, Jason Blood, and the Immortal Man. These three help Buddy to realize that he has to accept his personal tragedy and move on with his life. Thus, Buddy finally reaches the final stage of grief: acceptance. Also, I loved that Morrison briefly included Binky, DC’s answer to Archie in the story. 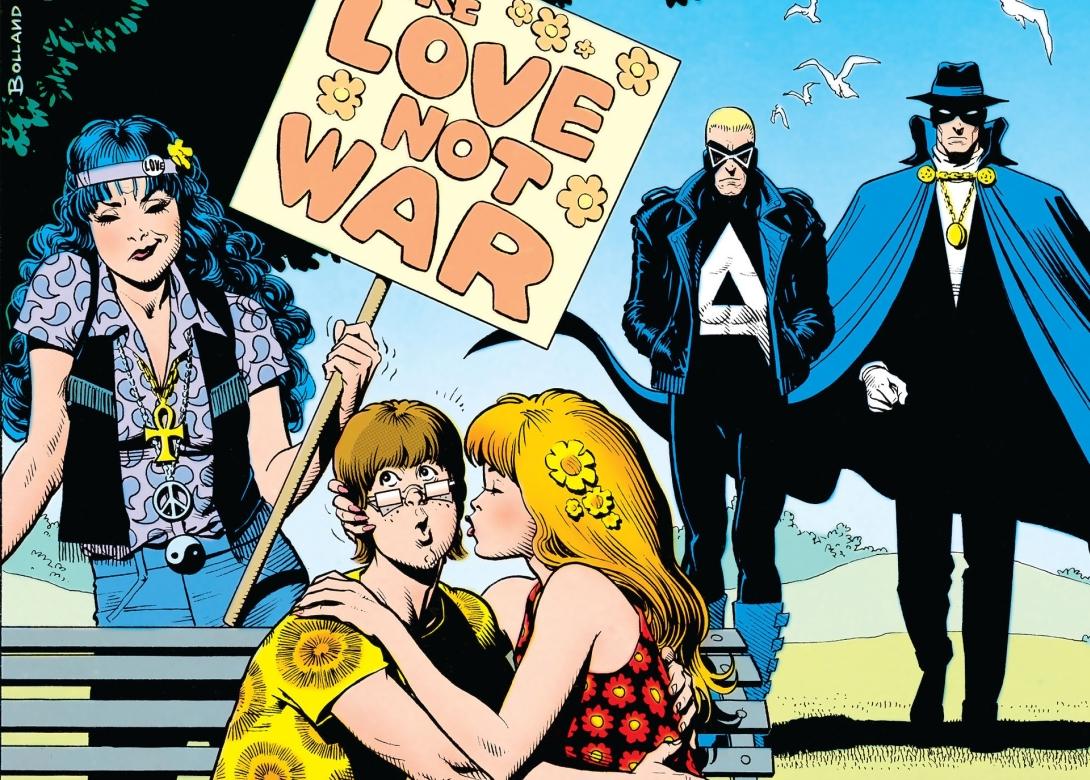 Returning to the present, Buddy shows up in time to confront the second crisis. Psycho Pirate’s memory of the pre-Crisis Multiverse is allowing characters to come back again – characters like Streaky the Supercat, Earth-3’s Crime Syndicate of America, and others. Morrison introduces his Love Syndicate of Dreamworld, as hippy version of the Justice League that he eventually assigns their own Earth in Multiversity. Morrison artfully uses the opportunity to indulge his habit of including obscure characters from DC’s history.

During this conflict, Dr. Highwater sees the comic books strewn about the scene and make the final connection between comics and reality: “Look, it’s all here. Comic books. That’s It! This is the shape of spacetime…. We wander in and out of stories and our minds fill in the gaps. We have histories and memories but all we have are brief appearances in the stories of other characters. And… every time we’re read, we live our time again”.

This may be one of the most important lessons of Morrison’s run. Comic stories have their life in the mind of the reader. Although, the continuity may change, the old stories are still real while you read and them. The old stories you loved haven’t disappeared after a continuity reboot. They can live again by picking up your old comics and re-reading them.

However, Morrison hasn’t finished with Buddy yet. Next, our hero takes a trip to comic book Limbo, where characters go when they are written out of continuity or forgotten. Here, Morrison includes many more obscure bits of DC history: the Inferior Five, Ma Hunkel, the Green Team, and others. It’s interesting to consider how many of these characters have returned to continuity since Morrison wrote this. For example, Max Mercury can be spotted, well before Mark Waid brought him back in the pages of The Flash. But, as Merryman explains, “You have to remember, that a lot of these people will get out”. 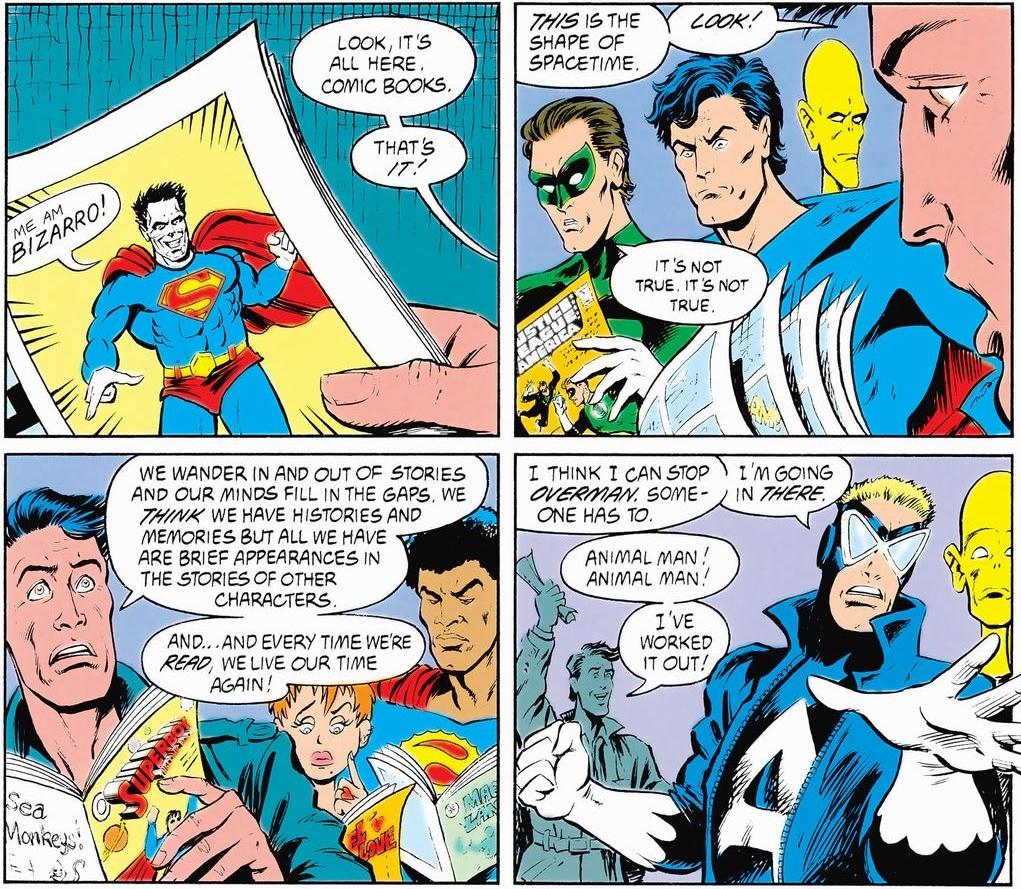 I also loved the joke of having the Gay Ghost stating, “I just hope they don’t bring me back”, making an oblique reference to the fact that his name had picked up some unintended connotations during his time in Limbo.

There is an expression that states that a good author puts himself into his work. Morrison does this in the finale of his run in the most literal sense possible. Buddy finds himself face to face with his writer, Grant Morrison. Well, technically an avatar form of Morrison written to speak for him.

In this way, Animal Man confronts his writer to find that he is not God, but one writer of a “world written by committee”. “I’ve been planning this meeting for nearly two years. I had so much to say. It was going to be a really good story”. He continues, “This is my last story. I’m sorry it’s all been an anticlimax, but this is as far as I can go with you. No explosions, no big revelations. A whimper rather than a bang”.

Morrison ends his story this way as a commentary on real life. We like to think of our lives as stories, but “life doesn’t have plots and subplots and denouements. It’s just a big collection of loose ends and dangling threads that never get explained”.

So, where does this leave Buddy? As Grant tells him, “Maybe your new writer will make things better for you”. He finally says, “Go home, Buddy. Forget we ever met”. Morrison himself proves to be the titular deus ex machina, sending Buddy home to find that his family alive.

This isn’t part of the story, but I have to add that Grant Morrison, or at least his avatar, soon came to regret writing himself into DC continuity. During the War of the Gods event, John Ostrander and Kim Yale introduced a character in Suicide Squad called the Writer, who was essentially Morrison as he appeared in Animal Man. Unfortunately for him, he was killed on his first mission with the Squad in Suicide Squad #58.

Morrison’s entire run on Animal Man was an absolute classic. Any flaws that may be present are utterly insignificant in the face of this amazing story. 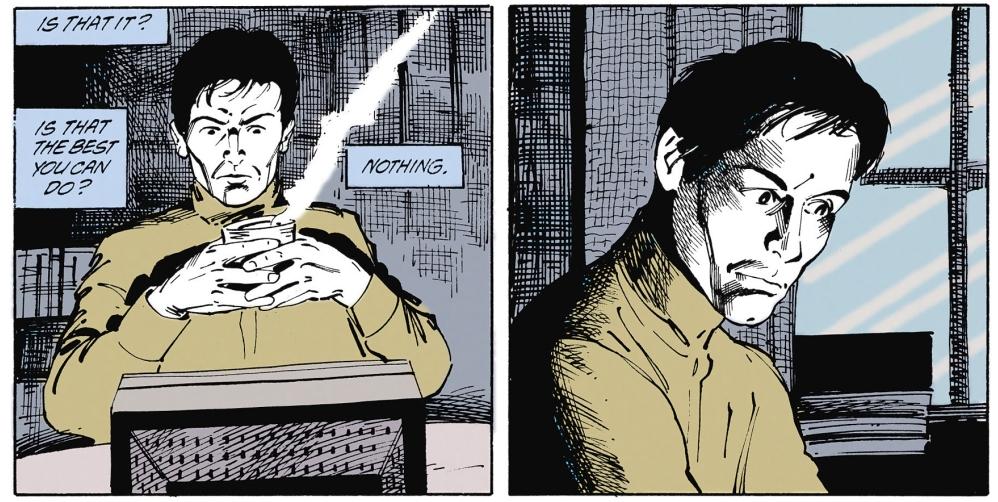 If you have never read this story, you owe it to yourself to read “Deus Ex Machina”, but Morrison’s entire Animal Man run. DC has reprinted it in three trade paperback volumes, but the original back issues would be even better if you can find them. Even if you aren’t particularly a fan of Animal Man, this story is an all-time classic.