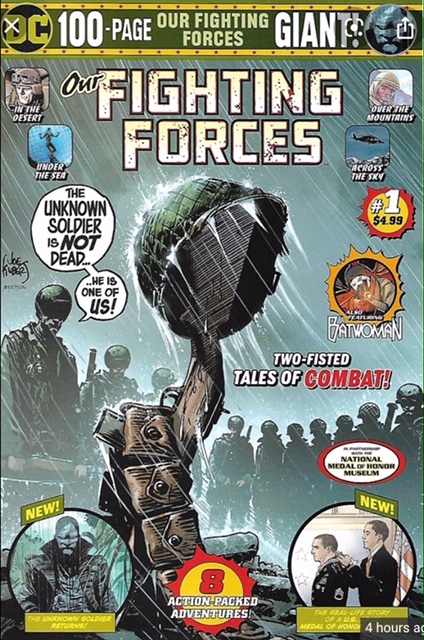 In the newest 100-Page Giant series found first at Walmart and later at your local comic shop, DC presents Our Fighting Forces Giant #1.  This issue features new stories starring the Unknown Soldier, Kate Kane aka Batwoman, Batman and Skull & ‘Bots.  The issue is completed by reprints from “The New 52” title Men of War.

It’s great to see DC featuring another genre in their Giant comics.  February saw From Beyond the Unknown, a science fiction themed issue.  While it featured traditional super-heroes in each story, Our Fighting Forces Giant #1 has only minimal connections to the costumed set.  It’s fitting that the cover for the Mass Market edition is a reprint by Joe Kubert who contributed to so many of DC’s war comics in the ’60 and ’70’s.

The fist story in the issue is a new tale of The Unknown Soldier.  Writer, Christopher Priest adds his ideas to the question: “Why we fight?”  Priest does a really nice job of developing a mysterious aura about the Unknown Soldier including multiple opinions on his nature.  Is he really a World War II vet?  Is he an identity that’s been with successive operatives over the years?  Instead of attempting to answer this question, the story instead focuses on the reasons sometimes men and women have to fight for what’s right.  It’s a sobering subject that deserves discussion. 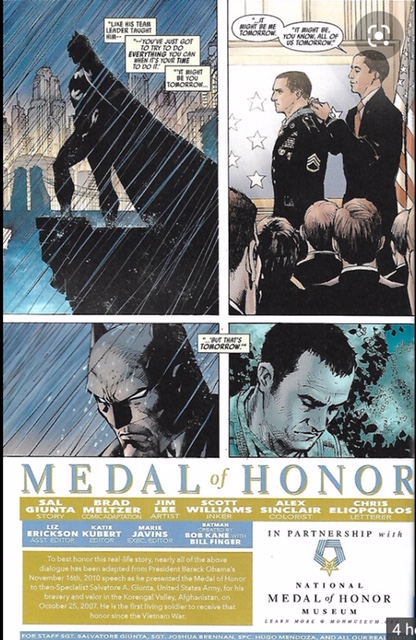 The third story is the account of Medal of Honor winner Sal Giunta and his real life exploits that earned him the award.  It’s fantastic to see a real veteran’s story presented.  Brad Meltzer adapts Giunta’s account into the story that is drawn by Jim Lee and Scott Williams.

The reprints are some of the best stories from the short-lived Men of War that was part of “The New 52” initiative.  That series seemed like it had just found its footing with the George Saint, SAS story that appeared in issue #7.  Saint appeared poised to be a new lead for the title, but, alas, it was cancelled with the subsequent issue.  Saint’s only appearance is reprinted in this issue. 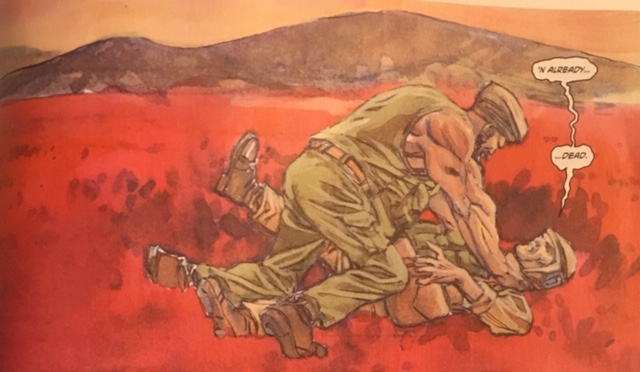 The Skull & ‘Bots story is, to the best of my knowledge, the first appearance of the concept.  It’s the weakest of the new material.  It’s a slightly humorous tale that falls flat.  A more straight forward story would’ve been a better choice.  Perhaps, a classic war reprint from DC archives or a more thoughtful tale of a classic DC war concept would’ve fit better.

Turning Giunta’s story into a Batman tale is just strange.  It’s hard to tell if we are supposed to think Giunta was imaging himself as Batman when he did what he did or if the reader is supposed to see Giunta as hero like the Batman- an example of Batman in the real world.  Unfortunately, including Batman cheapens the experience for me.  Giunta is a real-life combat hero.  His story doesn’t need the Batman.  A straightforward approach would’ve provided  the opportunity to include more of Giunta’s personality and emphasized his actions instead of muddling them with the Batman.  Most importantly, it would keep the focus on Giunta and his heroic actions. 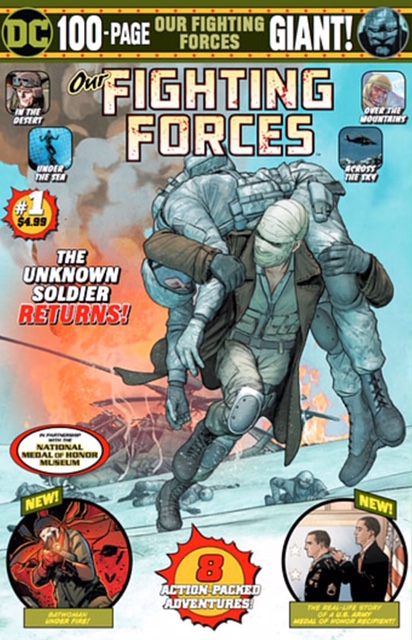 Overall, this issue is a good read.  DC needs more books like this that feature some of the characters from DC’s past.  This take on the Unknown Soldier certainly has a lot of mileage left in it.  Additionally, more stories based on real-life events like’s Giunta’s could provide a lot of interesting and enlightening material.  I still think James Robinson and Phil Winslade’s George Saint, SAS is a character worthy of additional development.  Show DC you want more issues of Our Fighting Forces Giant!  This issue is currently available at Walmart and is slated to arrive in comic shops on April 29th, but will most likely be rescheduled because of circumstances due to COVID-19.