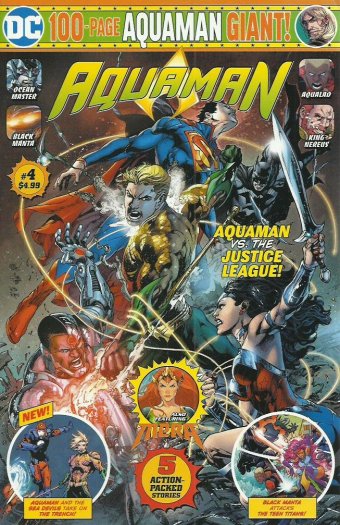 There are two new stories in Aquaman Giant #4, the first features another appearance of Dane Dorrance and the Sea Devils as they help Aquaman and Mera save the King of the Lurkers.  The second is an ecologically driven tale that has Aquaman and Mera save some whales, but it’s not the average “save the whales” story.  The reprints include chapter three of “Throne of Atlantis” from Justice League (“New 52”) #16, Mera: Queen of Atlantis #4 and a Jackson Hyde centered story from Teen Titans (“Rebirth”) #10.

“Stinging Tide” features the second appearance of the Sea Devils in Aquaman Giant.  It’s the beginning of a multi-part story with the Sea Devils presumably as Aquaman discovers that the King of the Lurkers has been set up by an unknown entity- Scorpio.  It’s nice to see a larger arc developing, and the inclusion of the Sea Devils is appreciated.  The Sea Devils first appeared back in 1960 in Showcase #27.  They’ve never had a lot of time in the spotlight, but they are a natural fit with Aquaman.  This story also has an interesting twist with Noble King of the Lurkers.  It’s echoed in Arthur’s recruiting of the Sea Devils.  The theme of “being a good neighbor” applies to both plot elements.  It’s a higher concept that fits well with Arthur’s position as King of Atlantis.  As stated, this story is continued in a larger arc , next month, and it’s easy to see Steve Orlando is building something with this series.  Let’s also recognize V. Ken Marion and Sandu Florea as they do an excellent job delineating and articulating the large battle between our heroes and the creatures of the Trench who have King Noble surrounded.

“Whale Watch” could’ve been a simple ecologically themed story, but instead, Cecil Castellucci does an excellent job of going deeper in two directions.  As Aquaman and Mera save a couple of whales who have run across some Navy maneuvers, the couple discuss the possibility of growing their family with a child.  This creates some nice thematic synergy with the regular Aquaman title which has just introduced a baby for the aquatic couple.  This story is not dissimilar in theme to Aquaman #56 which did an excellent job of exploring the couple’s early impressions on becoming parents.  Castellucci also does a nice job painting a picture of the whales in danger as a solution that requires teamwork on the part of all parties involved and doesn’t paint the Navy as villains.  Pop Mahn also successfully keeps the action engaging and exciting while simultaneously building the tension in Arthur and Mera’s conversation. 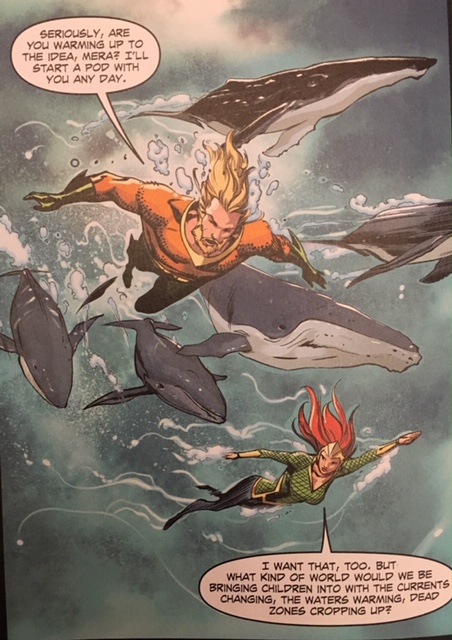 Both of these stories develop the theme of “making peace.”  It’s a logical and appropriate for Aquaman.  It portrays Arthur representing Atlantis as a leader would.  He’s looking for alliances and solutions.  It’s a huge thematic shift from traditional Altlantean civil warring and threats from the surface world.  Additionally, these stories give us a more classic Aquaman and Mera than the long story arc that Kelly Sue DeConnick has been developing over in the regular Aquaman title.  Like Superman, who’s been suffering greatly under Brian Michael Bendis in Action Comics and his own eponymously titled book, Aquaman hasn’t been very recognizable or enjoyable.  These Giants provide the opportunity to give these characters some much needed classic treatment that exceeds their own regular in-continuity titles.  At least, the most recent issue of Aquaman, #58 seems to be turning that title around. 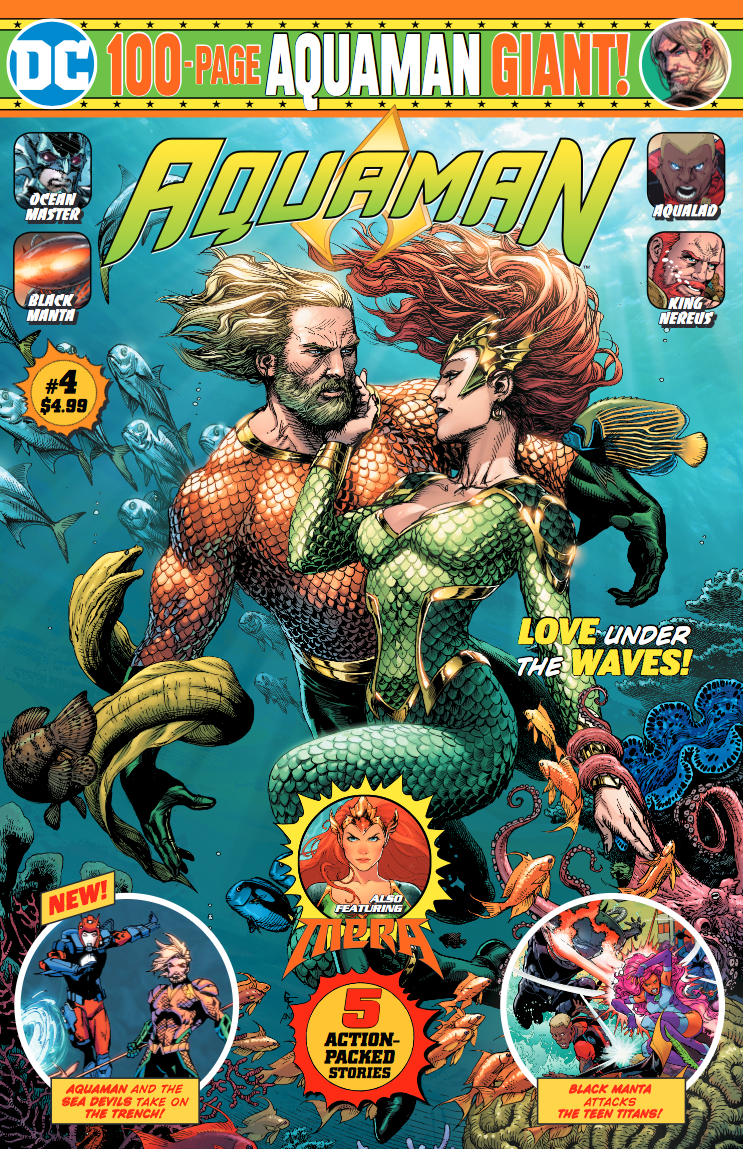 All that’s needed is more space to grow these concepts and a shave and a haircut for Arthur!

Aquaman Giant #4 is an excellent issue!  The reprints are all grea, with the “Throne of Atlantis” and Mera chapters being obvious standouts, the Teen Titans reprint is a real treat!  However, the two original stories are the real gems as they both do a wonderful job with character.  They also go deeper than the average story while also appearing to be building something.  Aquaman Giant #4 is currently available at Walmart.  Originally solicited to arrive in comic shops on May 13, it will most likely be delayed.