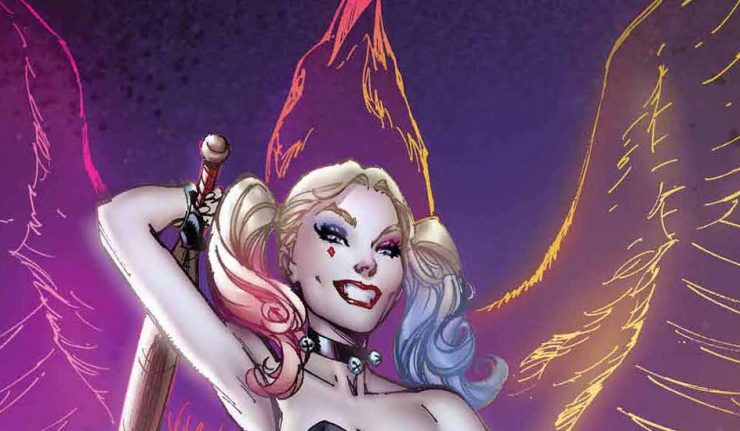 Black Canary’s life has spiraled out of control: her personal life is going through the ringer and her band is in crisis when an old flame resurfaces only to flicker out and set her on an all-new mission against an all-new opponent. The only thing she has to be grateful for is the fact that she’s not alone, as Huntress finds herself on a collision course with Black Canary’s quarry at Detective Montoya’s urging. Meanwhile, Harley Quinn has resurfaced outside of Gotham City and out of the Suicide Squad, with a new lease on life that is sure to make everyone else’s life more complicated.

The cover by Ivan Reis, Joe Prado and Alex Sinclair is cool. I like the concept and it looks cool.

The interior art is gorgeous. Emanuela Lupacchino is one of my favorite artists; her and Ray McCarthy make a great team. The characters are distinct and expressive and there’s an energy to the art. The two bring a lot of personality.

I think Brian Azzarello writes Dinah well. Her dialogue and demeanor in this is very reminiscent of how Gail Simone would write her. She has a fun personality that the script nails. Huntress is portrayed well too as the straight. The team dynamic is great; I loved the dialogue throughout this.

The book is a strange combination of various continuities. Black Canary and Huntress are in their Rebirth outfits while Harley is in her costume from the Suicide Squad movie. The book is not about forming the team as the Birds of Prey movie was but the team is the same one as the movie. And then Harley is written more in line with how she is in the DC Universe animated series. I like that the book is in its own continuity but I think it needed a stronger identity of its own.

The Joker’s role in this is strange. Like the movie, the book keeps him hidden. But unlike the movie, he’s an active part of the story. He never speaks; one of his henchman always speaks for him. Joker was hidden in the movie to avoid dealing with the actor. Here, it just feels it’s done to be like the movie.

I enjoyed this book a lot. Azzarello’s dialogue is strong and he creates a fun team dynamic. I love the artwork throughout; the book looks amazing. I wish it had more of a unique identity and didn’t feel the need to be like recent movies and television. But I had a lot of fun reading the book.