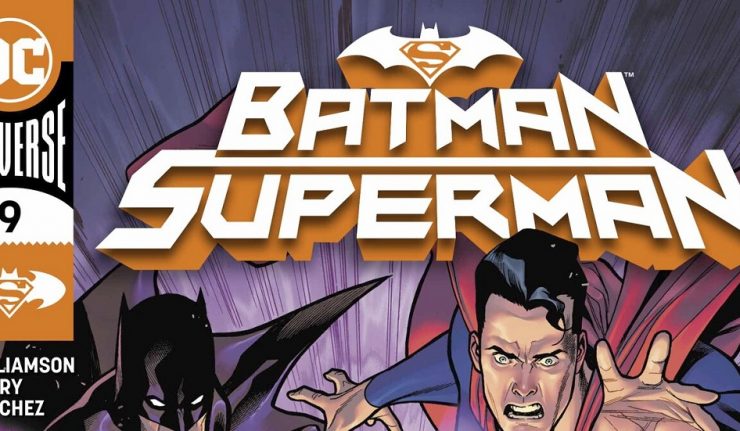 Batman/Superman #9 – “Atomic” part one! The Atomic Skull is dead. When Batman and Superman arrive on the scene of his explosive demise, they discover that this villain-turned-would-be hero was one of many people to be the subject of grisly-and sometimes fatal-experiments. But who is pulling the strings of these bizarre and unnecessary surgeries? Whom will they experiment on next? And what does one of Superman’s oldest foes, the Ultra-Humanite, have to do with this deadly mystery?

Let’s talk about what a great job DC is doing in bringing back villains of old.  And while I hate to skip ahead to the final pages of any book, the Atomic Skull, is a prelude to the Ultra-Humanite.

For any novice Superman fan, this is Superman’s very first villain.  Not Lex Luthor?  No it was the Ultra-Humanite!

I have been enjoying DC in its subtle manner introducing new characters to the fray (Punchline in Batman) and in seeing old characters like The Creeper coming into the mix.  But DC has gone back to the basics and provided the Ultra-Humanite!

This is as great as Amazo… but I digress!  When you are as old a comic fan as I am, this really excites me that we are getting back to some core villains while making sure the ones DC introduces are of some quality (no offense, but Kite-Man is not in that quality realm).

From a story line standpoint, this one is all Batman.  Having him confront the Atomic Skull ( supposedly reformed, but in a questionable role now) lends itself to a deeper story line as to whether any reformed villain can be trusted.

Fortunately, both Superman and Batman can see deeper than anyone else and the clues are there for the reader to pick up as well.

Williamson does a great job of keeping the revelation of Superman as Clark Kent as a fresh wound to deal with.  The continuity across the timeline and books that involve Superman and Lois is intact and that makes for great reading!

Clayton Henry and Alejandro Sanchez’s use of art, colors, and light….simply amazing.  This issue literally glows due to the meticulous coloring and how the images are rendered.

Night is almost day in this issue and Sanchez really lends his talent to this effect!

This is the beginning of a story arc and I get the use of Atomic Skull.   I also get the use of Batman and Superman having some “boundaries”.  When these two are together, there always seems to be a resentment that Batman has no powers (albeit his detective skills are worthy of any in the DC arena) and Clark is almost seen as inept a bit in this arena.

Batman doesn’t like anyone coming to Gotham (his city), but he grunts at Superman about being late to save him.  See the recent issue of Shazam #12 as to how he greets other heroes.

But this antagonistic relationship between Clark and Bruce has got to evolve a bit.  Given the recent events in the world, and some clips I have seen from comics from fifty years ago, Superman and Batman were the models in getting along with each other and other people no matter their perceived differences.

Let’s get these guys on the same page and bring in Jon Stewart to this so we can have comics lead the way to a better communication.  We need our heroes on this front now!

Batman/Superman #8 – Ultra-Humanite. Can I write that again…Ultra-Humanite!  DC goes to the vault and comes back with a treasure!  Thanks Joshua Williamson for getting the comics back to some of its roots.  I love a good visit back in time!