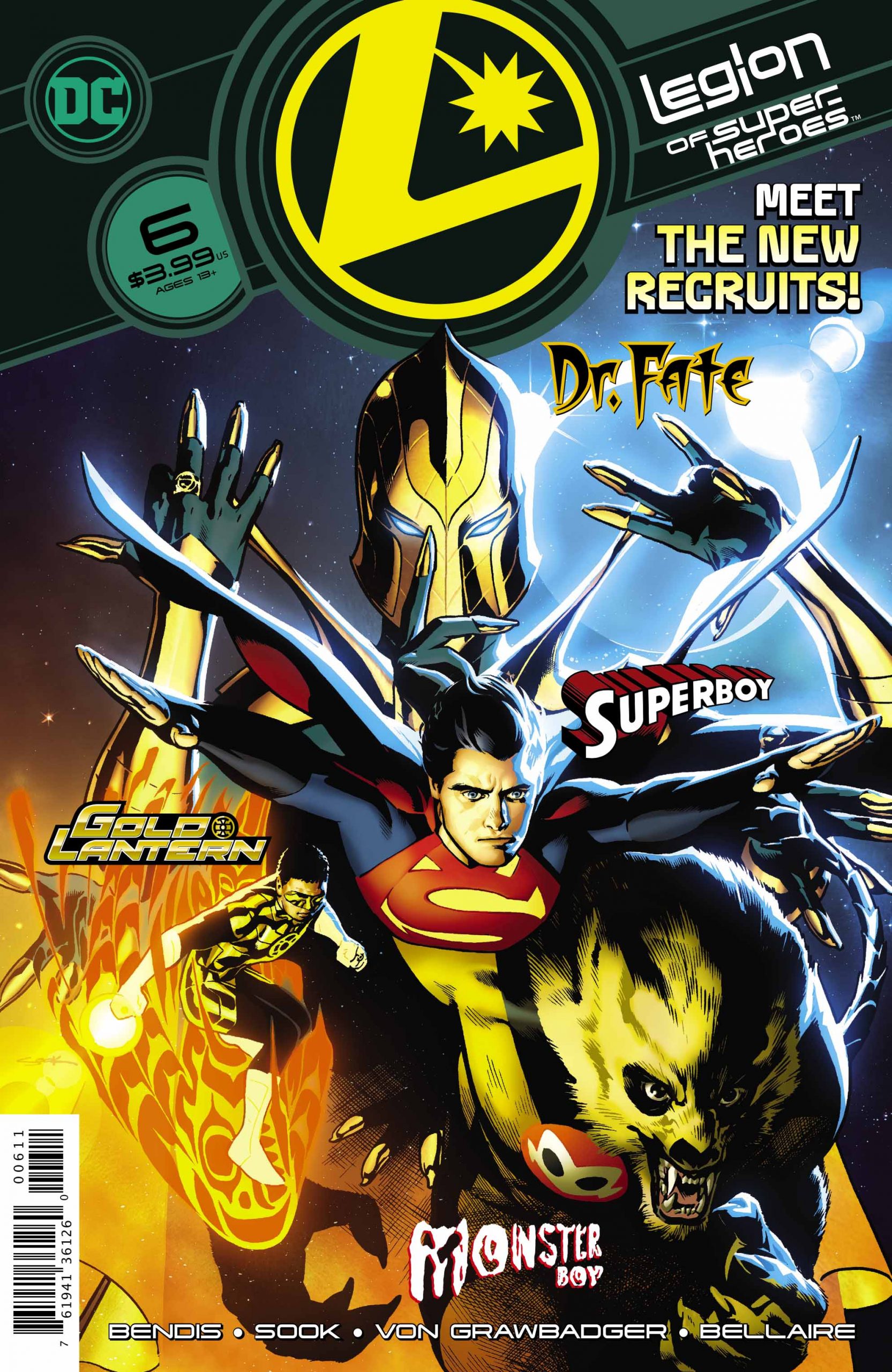 The Legion finally defeats the Horraz and puts Aquaman’s Tident to good use.

The nearly epic battle between the Horraz is actually quite fun.  There are lots of Legionnaires involved and they attempt to work together.  For old readers, it’s very reminiscent of how the Legion works and should work in this type of situation.  Even down to the conflicting opinions of what to do.  For new readers, this begins to approximate what the big deal is about the Legion of Super-Heroes.

The visual appearance of the book by Sook, Von Grawbadger and Bellaire is a just great.  Bellaire has chosen a light and airy color palette.  There’s nothing lost in his presentation of the colorful Legionnaires themselves.  This echoes the sense of hope that the Legion is supposed to bring.

There are a few times that Bendis manages to use some dialogue that tells the reader a little bit about the character.  Brainy’s mandate to evacuate Earth sounds on point, as does Wildfire’s snarky comment about not being able to hold still during a battle.

Last issue wrapped up a look at the origin of the Legion of-Super-Heroes.  Legion of Super-Heroes #6 wraps up the storyline with Aquaman’s Trident that was begun in Legion of Super-Heroes #1.  While it’s good that this story arc actually finishes, it feels very unsatisfying for a 6-issue arc.  It’s also somewhat odd that issues #4 and #5 were the best issues and they were distractions from the Aquaman’s Trident plot line.  It boils the Aquaman trident arc down to essentially four issues.

The resolution also feels rushed.  It seems that if one read the arc and skipped #4 and #5 the story would feel like a single issue story from the Bronze Age of Comics.  It doesn’t help that the finale with Aquaman’s Trident restoring the Earth’s Oceans has been telegraphed from the beginning.  It’s one of those things that if it had wrapped up in a single issue or even an annual it would’ve been a pretty cool story.  Unfortunately, drug out over 6 months it’s not a surprise or even that interesting at this point.  It’s an eventuality that was finally realized over the course of an excruciating 6 months (more because of the Coronavirus).  It just seems obvious that story could’ve been told better and would’ve been a much more enjoyable experience.

Finally, it almost seems like issues #4 and #5 were from a different story entirely with a different story telling approach.  Those issues focused much more on character and characterization.  This issue slides back to some of the problems with the first issue.  Things don’t always make sense!  Why does President Brande have such a different opinion of the Legion than in the last 2 issues?  The “next issue tease” appears to promise a follow up on that, but it feels awkward.  Additionally, the abrupt ending is not all that clear.  In one panel the water is flowing over the planet and the next, everyone is at United Planets headquarters.  It almost feels like pages, or at least panels are missing.

Is the underwhelming introduction of the Gold Lantern and Monster Boy’s cameo even worth mentioning?

We get the wrap up of the first storyline, but it’s not really very exciting.  Perhaps, Legion of Super-Heroes would be a better title if there was a stronger focus on character like issues #4 and #5.  The Aquaman’s Trident storyline wasn’t very interesting to begin with and it has played out as such.  Legion of Super-Heroes #6 is pretty to look at, but overall there’s so much more that could be done with the book and cast of characters.