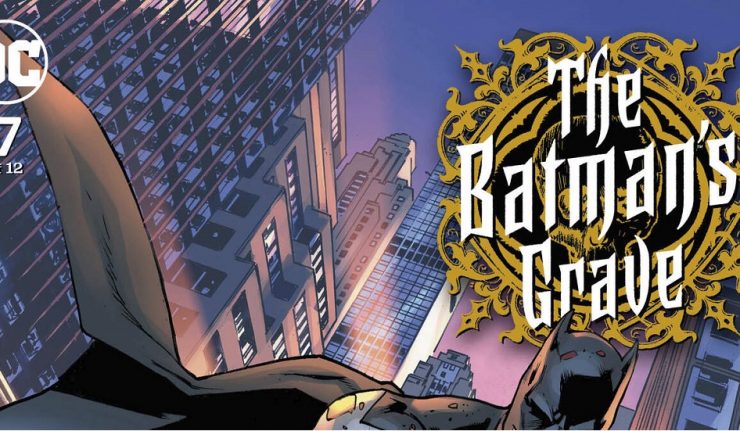 There’s a lunatic on the loose and a dead body inside a supposedly impregnable home. Members of the justice system are being murdered, and nobody knows what’s happening. Does the Batman have the single clue that’s the key to the whole nightmare?

This is the seventh installment of The Batman’s Grave

Warren Ellis and Bryan Hitch provide us the seventh installment in a Batman story that is both a detective story but also a refreshing place where Jim Gordon’s hair is still red and Alfred is still alive.  I miss Alfred…

I praise both artist and writer in that it takes a lot to tell the  story at times with no dialogue and Bryan Hitch does a great job with his pens in translating the story that Warren Ellis has written.

Batman walking through a bus stop in full uniform after the Batmobile is blown to bits… priceless comedy and done so in a few frames.

And it is a simpler tale…no gadgets and millions of dollars to address all that is going on around him.  Ellis has stripped him down a bit and it is refreshing.

Alfred and Bruce’s exchanges in the Bat Cave are priceless memories of real detective work.  Alfred’s background and military service shine through in his offerings to Bruce as they work the case.

Ellis gets it as a Batman author and I hope he continues to provide comics that include Batman’s early years, but reset to a world with cellphones, Apps and Uber.

Alfred plays a pretty clever role in the final pages, and while dialogue is rich in the Bruce and Alfred scenes, the frames without conversation tell more of the Batman story.

Bryan Hitch takes over and plays to his strengths in artistic story telling!  Frame upon frame shows that Gotham is in turmoil at night and that Batman is needed.

None…except that we have to wait on the cliff hanger that Ellis offers us as the end of the issue.  This is one juicy novel.

The more of these issues that mount up, the more I wish it was a trade paperback immediately.  But as a fan of the serial novel style, you can see why Ellis keeps cliff hanging the story!  Get in while you can as this is a refreshing ride on a new Batman train.