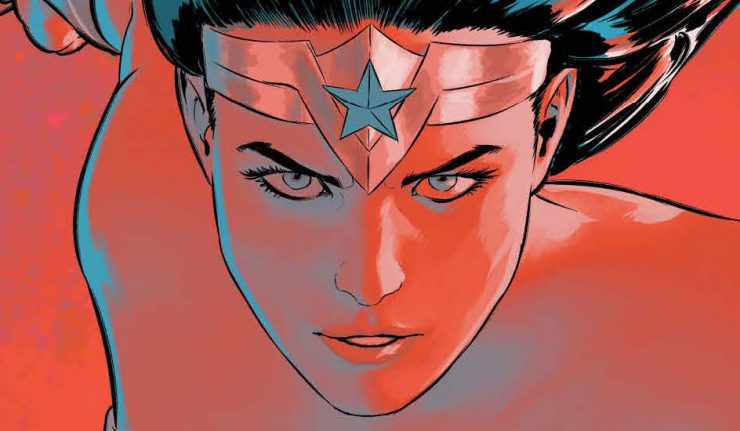 With Wonder Woman down, the Four Horsewomen are victorious-and now they set their sights on the rest of the Amazons! Can anyone stop Warmaster from delivering ultimate vengeance upon Wonder Woman’s family?

The cover is okay. I like the intensity of the four Horsewoman bearing down on Diana. I think it’s a little busy but it’s fine.

The interior art is really strong. The characters are expressive and the action is well done. It all looks great and is visually interesting.

I love that Diana doesn’t even remotely consider Warmaster’s generic ultimatum. The whole sadistic choice idea is so over done. It was cool to see Diana reject it entirely. I also love that Diana spends the entire fight trying to reach Warmaster’s humanity. It’s to no avail but I think Steve Orlando understands the character.

I also appreciate that Donna has the same reaction to the other Horsewomen trying to recruit her. They’re giving her the generic speech about joining the dark side and she never considers it. She rejects it as stupid before besting the two. Donna’s really cool in this; I like seeing her in a Wonder Woman story.

I really enjoyed Diana fighting in her casual clothes. It’s always a nice change of pace to not always see the costume. I don’t know why; it seems kind of dumb that I like it but I think it’s cool.

What brings this story down is how bad these villains are. As I mention above, they’re generic. Their plan is generic as is their motivation. The attempt to go to Themyscira is pretty much the exact same as Cheetah’s from the Year of the Villain story. I’ve seen this all before. Warmaster isn’t sympathetic because she turned to the darkness so extremely so fast. Nothing about her is compelling. And the Horsewomen aren’t much better.

This is a decent issue. The action is really strong with some great art to back it up. I think Orlando knows how to write Diana and Donna; they’re both compelling and fun characters that are written well in this. But the villains are generic and lame; they do nothing for this story outside of plot. There’s no emotional connection and it brings the story down.