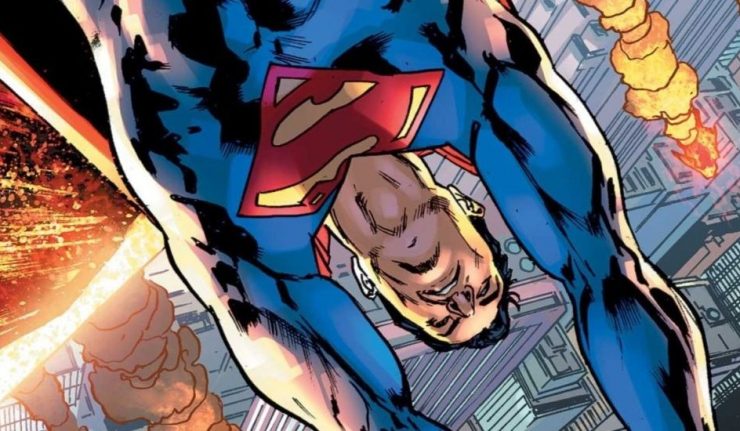 The following is sourced from https://www.gamersradar.com/a-new-anti-superman-villain-debuting-this-september/

As Superman #25 approaches this September, the solicits for the month give us the first hints of a new villain coming to the title. A villain touted as the Anti-Superman, Synmar.

So what do we know so far about Synmar? According to DC Comics Synmar is the “antithesis of everything Superman stands for”. The issue, slated for release September 8th 2020, introduces readers to the new villain, noted to be “a warrior created as the standard-bearer for an entire alien race that is from the furthest reaches of DC Space”. “A colossal new threat to Superman, the planet Earth, and the DC Universe arrives on the scene in this extra-sized anniversary issue!,”

The above is according to the info from DC Comics on the issue. It goes on to say “This unique warrior called the Synmar was created to represent an entire alien race. He’s trained his entire life — but for what purpose? As the antithesis of everything Superman stands for, Synmar launches his aggression towards Earth — to destroy the Man of Steel and every being on the planet! This is what Superman was born to protect us from!”

As for the team working on Superman #25, it will be written by Brian Michael Bendis, with art by Ivan Reis.

“I can’t wait for fans to check out this issue,” (Bendis is quoted saying from the announcement for Superman #25) “Ivan Reis returns for this issue and this is some of his best work I’ve seen yet. Along with that, we’re introducing a new surprise or two and a new threat, Synmar.”

But, as you will see in the above linked article, this is only half of what Bendis has coming for the Man of Steel in September 2020. There is also Action Comics #1025, coming September 22nd 2020. In this issue we have the team-up of Superman, Supergirl, and both Superboys. The threat? The Invisible Mafia.

“Welcome to the “House of Kent! Superman’s truth is out there — and now it’s time to rewrite the rules! The Invisible Mafia has taken advantage of the chaos that’s descended on Metropolis, so the House of Kent is going to talk to them in a language they’ll understand. It’s a new adventure featuring Superman like you’ve never seen him — or them — before, in a story guest-starring Supergirl and two — yes, two! — Superboys!”

As of this date both Superman #25 and Action Comics #1025 are not yet available for pre-order. However that should change soon in the coming days, so stay tuned and keep an eye out at your local purveyor of comics for both issues when they go up for sale (coming in September).