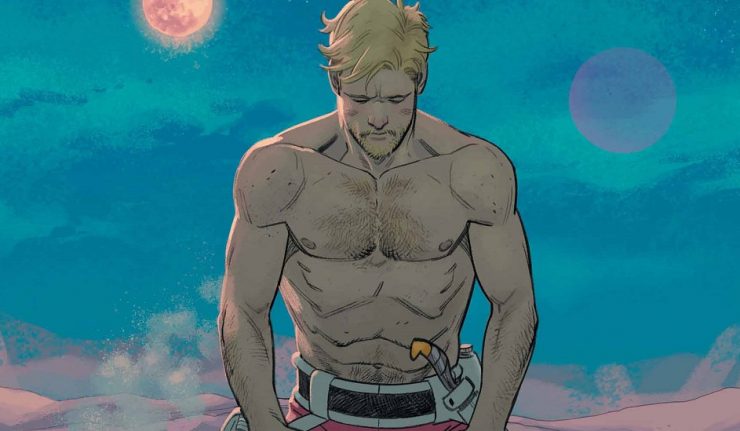 Mister Terrific reads Adam’s book and begins to question the validity of the story.  Meanwhile, we go back to Adam at the begin of this “strange adventure” and learn his first move against the Pykkts.

Like last issue, Mitch Gerads and “Doc” Shaner are the stars of the creative team.  Neither outshines the other, but rather they both do their part in telling the story.  Gerads handles the “present” and it’s a bit grittier and textured.  Shaner’s “past,” the story of Adam’s war against the Pykkts fits Shaner’s classic style.  It’s not hard to see why the two artists are handling the sections they’ve been assigned.  Shaner’s “past” is just like the comics of yesteryear, good vs. evil- classic adventure!  Shaner’s style leans into this perfectly.  It’s hard not to imagine the Flash Gordon series he drew for Dynamite a couple of years back.  It’s that genre that Shaner’s work fits so well.

This “ideal” contrasts wonderfully with Gerads serious and textured “present.”  Last issue, it was all about Adam and Alanna and the mysterious murder.  This issue focuses on Mister Terrific as he begins his investigation.  The “present” is a world of grays, no black and white here, no simple good vs. evil.  Instead, it is nuanced.  Gerads never lets it get whimsical as he keeps it very serious with lots of textures, perfectly capturing the emotions in King’s script.  At times, it is very expressionistic in his choice of color, or lack of color variation.  He’s working with a technical knowledge of color and how a particular hue will evoke an emotion- yellow for uneasiness is an example.  Shaner’s color palette similarly reflects the genre in which he’s working.  It’s classic comic book colors.

Tom King does a great thing with Strange Adventures #2.  While he does reveal a little of Adam’s plan of attack against the Pykkts, he mostly focuses on character.  Character! Character! Character!  He beautifully brings Mister Terrific to the forefront, and not only is this issue as much about him as it is Adam Strange, it is apparent that this entire series will be as much about Michael Holt as Rann’s protector.  Batman’s character is even touched on.  This issue all comes together when Michael calls out Batman for having requested his intervention because of what happened to his wife, Paula.  But, when his T-Sphere asks Michael a question to which he does not know the answer- this connects Michael and Adam in a way that it is obvious Batman got Michael involved for Michael as much as he is doing it for Adam.

There’s a quote at the end of the issue by legendary comic book artist, Alex Toth.  I’ve always seen Toth’s influence on Shaner, I can’t help but associate the two together.  This particular quote is a mantra for life,

Strange Adventures #2 is undoubtedly a fantastic comic book.  There is no question about that.  The only lingering concern is what impact it has on the characters.  King’s Heroes in Crisis was a complete bust and waste of time in my opinion.  The concern here is that he is simply breaking down a classic hero.  It can’t be helped- will Adam Strange end up broken like Wally West?  If so, then all this is wasted exercise.  However, technically, Strange Adventures is far superior to Heroes in Crisis in execution already.  So, it’s possible that Strange Adventures will be a much better executed series even if the result is the same.  Two issues in it is already exponentially better than Heroes in Crisis.

The question remains, is King telling a story about compromise in morals or is he simply attempting to destroy Adam Strange?  Will there be gray areas, or will Adam be a murderer and war criminal?   If it’s all a ploy to discredit and dismantle a hero, then it’s a waste of time.

Strange Adventures #2 may be even stronger than issue #1.  By bringing Mister Terrific in with a significant character focus, King, Gerads and Shaner make this book about two heroes instead of one!  Gerads and Shaner do exemplary work in the art and color department in this issue and really enhance King’s script.  This is great comics!  But, only the complete story will deliver a verdict on King’s motivation, treatise on morality in war or the destruction of a classic hero?