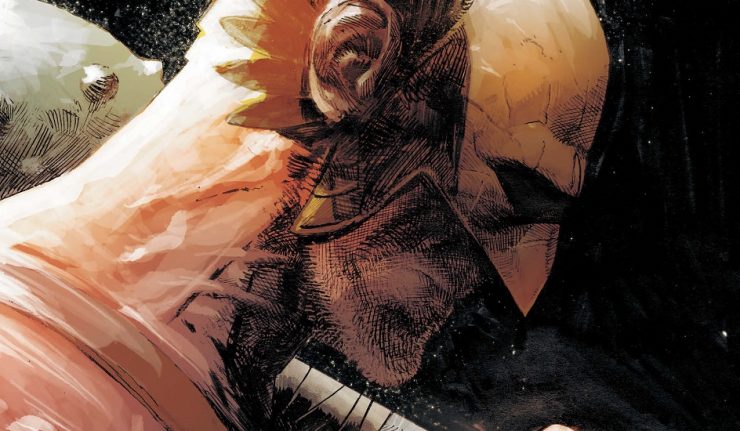 Carter and Shayera face the army of the Deathbringer in the World Beyond the Void.  As they free all those Hawkman banished there as Ktar, our heroes come face to face with the god Ktar betrayed.

From the beginning of this Hawkman series, Robert Venditti has made character the focus.  Either in a “Times Past” style story like last issue in which we learned about one of Carter’s lives during the Black Plague in Europe or when his origin as Ktar, the Deathbringer was revealed and set him on his current redemptive path, character has been the most significant element in the series.  Hawkman #24 is no different as in this issue Carter and Shayera find themselves drawn into the World Beyond the Void and must face the army he once led as Ktar.  It should come as no surprise that this is all part and parcel of his larger goal of redemption.

While some would not be forgiving of such a person, at least one of the banished victims understands that their former oppressor has become their savior.  This delivers a powerful message about the possibility making giant changes in one’s life.  Not everyone will accept that change.  Hawkman doesn’t fight back when he’s first attacked by those he banished.  However, once he must face his former army, he fights for those he’s banished and his actions speak for his intent- actions speak louder than words.

Again, this issue comes with an eerie relevance as the United States seeks to change from the inside.  As Confederate Civil War monuments are removed around the Southern United States, it fits right into this theme of redemption and actions speaking louder than words.  While this is particular prescient for the events of the week, it is an eternal reality as well for people around the world.  Anyone can choose to make a change in one’s life and become a better person.  It’s not easy, it can be extremely difficult, and it will come with action.  There’s a depth to this series that always elevates it.  Hawkman #24 is no exception.  Again, I am moved in my soul.

The art team of Pasarin, Albert, Smith, Von Grawbadger and Cox do a great job of making this issue feel seamless despite the multiple inkers.  Clearly, Pasarin holds down the visuals with his layouts and excellent draftsmanship, while Cox ties it all together with some really nice colors.  He accents the contrast between the different groups of characters in the void.  Carter and Shayera get a full color compliment while the banished victims are depicted almost monochromatically (stripped of their souls?) and the Deathbringer army is mostly grey with some red and orange highlights on their armor.  Overall, it distinguishes the three different groups effectively and reveals something deeper about the characters.

If anything, this issue reads just a bit too quickly.  It’s a minor complaint, but it’s not uncommon for comics of today.

It’s too easy to say again that this is the best ongoing comic DC is publishing, but it’s still true.  There is a depth to Venditti’s writing that is missing from too many comics.  Wonderfully, the art is just as striking.  They fit together perfectly as the art team builds on the character and depth of story to present a really unified whole.  Sometimes, comics have great writing and passable art, or beautiful looking pages under an abysmal script, but with Hawkman you get the whole package…if, only each issue could be double length! 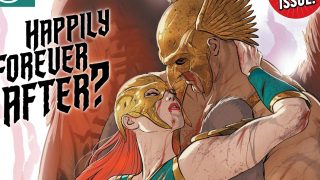