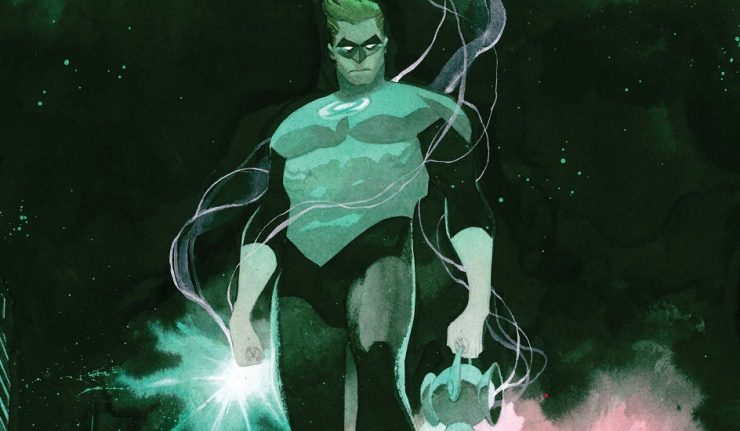 Hal Jordan and Barry Allen team up to defeat an invasion by the Golden Giants of Neo-Pangaea with an assist from Olivia Reynolds (who?) and it’s all about toys!

It’s great to see Hal and Barry together.  They have a long history as friends, and it’s just plain fun!  In this way, this issue is reminiscent of The Green Lantern #8 in which Green Arrow and Green Lantern have an adventure that harkens back to classic Silver Age material.  Strangely, they both involve giants!  It could be coincidental, but knowing Grant Morrison, it could easily be intentional.  These Golden Giants that Hal and Barry face were originally introduced back in The Flash #120 (May, 1961) when Wally West was still Kid Flash. The Green Lantern: Season Two #4 is another example of Morrison mining the Silver Age for inspiration and fun.   When Barry mentions Wally it allows Hal a moment to offer condolences and support for Wally’s fate in Heroes in Crisis.  It’s an obvious moment that should be acknowledged.

Olivia Reynolds is probably just as obscure as the Golden Giants.  Morrison does a good job of telling the reader all the important information on her so that a Google search is not required.  However, that Google search will still be helpful.  In Season One, Morrison peppered the series with numerous Silver Age concepts and characters and brought them together into a unified story by the end of the series.  One hopes that this is what will happen again by the end of Season Two.

Liam Sharp does some great work as always in this issue.  There are some pages depicting the Flash’s speed effects that really stand out.  The transformation of Olivia from simple toy company executive to the U-Mind are emphasized in the visual changes.  It is a great example of the art accenting the script in ways that only comics can.  Steve Oliff even adjusts her hair color to show this as well.  This is subtle, but very effective.

While Morrison’s use of Silver Age concepts and one-off stories are an overall positive, there’s something with Season Two that just isn’t clicking.  All the parts are there, but it isn’t coming together in the same manner that Season One coalesced.  The most obvious aspect in The Green Lantern: Season Two #4 is when Hal mentions Wally.  Barry seems to gloss over it with a detached confidence.   The Barry in this issue doesn’t feel like the same constantly self-doubting and self-blaming Barry over in his own title written by Joshua Williamson. (Not that I like Williamson’s characterization of Barry!)  It’s almost as if Morrison was annoyed with Wally’s fate in Heroes in Crisis as much as I was.  He did his duty to have Hal speak about it, but it just seems to derail the tone and affect of the story.

Which leads me to the idea that despite my concerns about following continuity way back in The Green Lantern #1, perhaps this series would work better out of continuity.  This goes against what Morrison does so well, which is work in the most outrageous continuity and make it fit.  Perhaps, this is more an indicator of the problems with Heroes in Crisis and the direction of so many characters in the current DC Universe rather than The Green Lantern: Season Two.  In any case, he made it work in Season One, dare I say it, by being further and further out there.  With a return to more “normal” tales, it’s just not meshing as well.

All the parts are present in The Green Lantern: Season Two #4, but they are not coming together as well as they should.  Overall, it leaves one feeling a little disappointed.  Hopefully, this series will take a turn for something bigger and more cohesive.  Morrison is capable of making the far out and bizarre work.  It feels like he’s holding back here.  The tease for next issue does hold some promise…