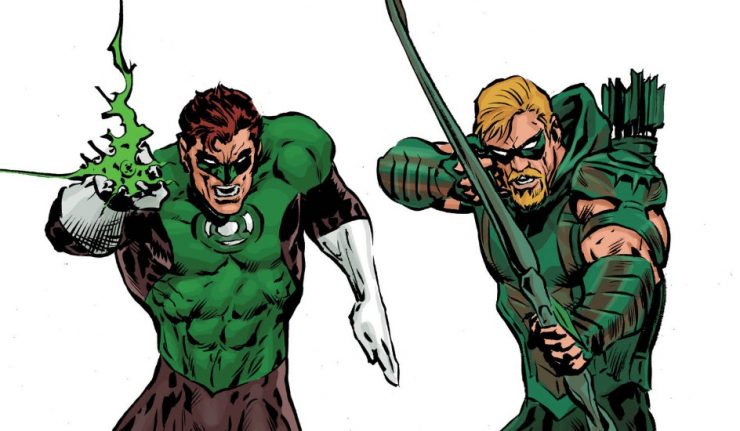 On a distant planet where murder is a part of the culture a hit is put out on a planet in the Sol system…”Soil.”  And on that planet, two old friends are getting together as they try and sort out a new drug that’s hit the streets of Seattle (Ollie still lives in Seattle, right?).  Hal Jordan and Oliver Queen, the erstwhile Green Lantern and Green Arrow, after a little personal catching up, follow a lead on the drug only to discover a giant green arrow sticking up out of the docks on the waterfront.

At first, Ollie doesn’t recognize it, and Hal is getting lots of extradimensional radiation from it that makes him believe that they should call in the Justice League.  Once they stumble on to a collapsed Xeen Arrow, another kind of giant Green Arrow, Ollie confesses he knows more about what’s going on….  With a little teamwork the duo figure out the secret behind the “drug.” And stop the dealer, while also aiding Xeen Arrow on his way back home.  Oh, there’s a Xeen Lantern, too…you’ve just got to read it….

There are a lot of good things about this issue, both conceptually and in the details.  One of the shortest quickest almost throwaway lines finally touched on one of my negatives from The Green Lantern #1.  Ollie asks Hal about Carol Ferris, appearing to believe that Hal has patched things up with Carol.  Recall, this is where things were left at the end of Robert Venditti’s run on the character with Hal Jordan and the Green Lantern Corps #50.  This aspect was ignored in issue #1 and it seemed that the issue didn’t follow what had happened in that finale.  Finally, with The Green Lantern #8 we learn a bit more about that.  While Morrison doesn’t spell it all out, clearly there’s a story to be told.  And in an issue that is informed by so many stories of the past, it makes sense that this is addressed.

Morrison has a great respect for DC’s past and it is apparent as he uses the famous “Hard Travelling Heroes” era of Green Lantern/Green Arrow in revisiting Hal and Ollie’s friendship.  This is a classic Morrison’s move as this inclusion acknowledges this classic era in these characters’ lives as part of the current continuity.  Thus, it adds a connection to the greater DC Universe and is a bit of fun nostalgia, as well.  Some of the details that stand out are Hal’s comment on the painting on Ollie’s wall, an original Adams- a reference to the legendary, Neal Adams, the artist on the series; the cover blurb “space junkies,” a nod to the Roy Harper drug storyline from the classic run; and even Ollie’s plea to Hal to “Come down to Earth..see first-hand the problems we’re dealing with down here in the gutters” echoes the theme of the entire “Hard Travelling Heroes” era as the two set off across country to find the “fine country out there someplace,” at the end of Green Lantern/Green Arrow #76.

This isn’t the only call-back Morrison employs in The Green Lantern #8, the bulk of the tale involves a “drug” that is having a terrible impact on its users.  It turns out that this drug is being run by Glorigold deGrand, who bears a striking resemblance to a villain seen way back in Adventure Comics #253 (Oct, 1958) in the Green Arrow tale, “Prisoners of Dimension Zero.”  Not only that, but Xeen Arrow made his first appearance in the same issue 61 years ago.

While a reference to an old issue is not necessarily something out of the ordinary, in this case Morrison is working in an old sci-fi themed case that was popular in that publishing era and placing it in part of this current Green Arrow’s past.  This is a far cry from the much more street level genre of stories that have been Ollie’s milieu for many years, especially since “The New 52.”  This is exactly what Morrison did in his “Batman R.I.P” storyline in which he found a way to incorporate all of Batman’s bizarre and weird tales published in the ’50’s and ’60’s into the current Batman’s past, so that everything is canon.  It’s an incredible reference to a nearly forgotten era when Jack Kirby drew Green Arrow in both Adventure Comics and World’s Finest Comics.

Finally, it must be noted that Liam Sharp has adjusted his style slightly so that it resembles the work of Neal Adams.  It’s appropriate for the Green Lantern/Green Arrow team and it works so well because Sharp already has an Adams quality to his work.  So far in this series, Sharp has been able to reference a number of classic artists to enhance the stories and give the reader a little thrill of recognition.  What’s so remarkable is that it’s integrated flawlessly and does not stand out as a swipe, but simply an homage that adds to the reading experience.

The first negative apparent in The Green Lantern #8 is Morrison’s penchant for starting things in medias res.  In this case one of the Guardians of the Universe steps in to clear up things, but it can still be a little jarring.  It is a cinematic technique that doesn’t always translate well to comics.

The second negative is not necessarily a negative.  Morrison seems to know he’s got an older, fairly well read audience.  Without understanding the references in this issue, The Green Lantern #8 could be a head scratcher for some.  Hope you aren’t one of those!  Well, you shouldn’t be now….

The Green Lantern #8 is a fun nostalgic trip as Hal Jordan and Oliver Queen reconnect their long-time friendship.  The issue is packed with references from  stories that remind the reader of DC Comics long history and great creators like Jack Kirby and Neal Adams.   Sharp is in fine form as he homages Adams in this tale and Morrison makes the reader feel glad to see Hal and Ollie palling around again, especially when it means that Xeen Arrow is still around.