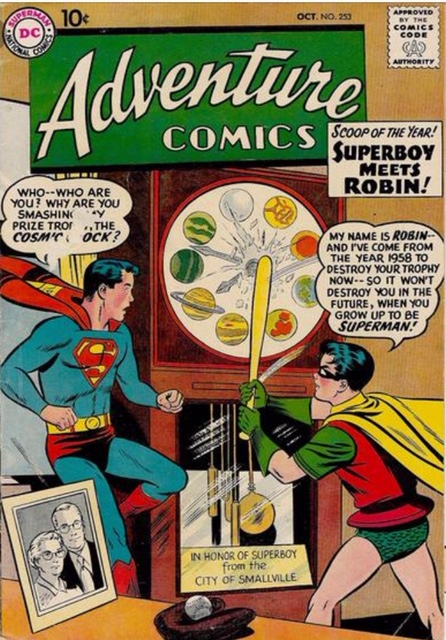 In the late 1950’s Jack Kirby ended up working on the Green Arrow strip that ran in Adventure Comics and World’s Finest Comics.  According to Mark Evanier, Jack took the job hoping to turn it into something that would spin off into it’s own title.  He tried to introduce a lot of different sci-fi concepts to the strip, but they didn’t pan out for the King.  “Prisoners of Dimension Zero” with Adventure Comics #253 is an example of the different type of story that Kirby attempted to do with the Emerald Archer.  Despite Wood being credited as the writer of this tale, Evanier points out that Kirby had gotten the “ok” from editor Jack Schiff to “punch up” scripts he felt necessary.  This led to Kirby introducing such concepts to the fairly heretofore pedestrian strip. 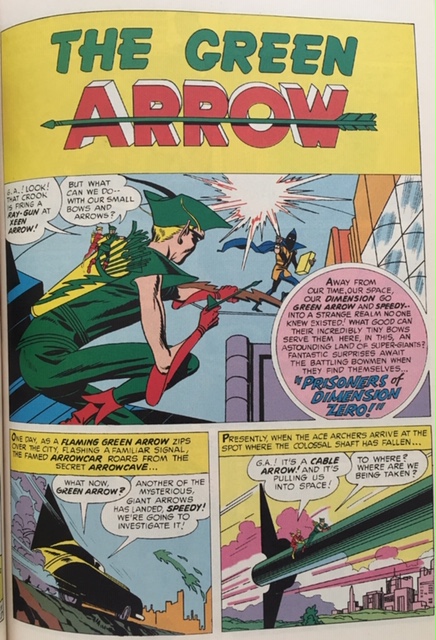 Adventure Comics #253 – “Prisoners of Dimension Zero” is actually a rare for the era part two of a rare two part tale.   Adventure Comics #252 contained “The Mystery of the Giant Arrows.”  Green Arrow and Speedy have to figure out where these giant arrows are coming from that are appearing all over the city.  They discover that they are extradimensional.  The story ends as they take a ride on one to that other dimension.  “Prisoners of Dimension Zero” retells the end of the previous tale and takes the duo to the other dimension.  There, the two meet a crime fighter, Xeen Arrow, who is recognizable as that dimension’s Green Arrow.

Green Arrow and Speedy observer Xeen Arrow in action as he apprehends a couple criminals before stowing away in Xeen Arrow’s Arrowcar.  Xeen Arrow becomes aware of the extradimensional archers and helps them get home before they are trapped in Dimension Zero forever. 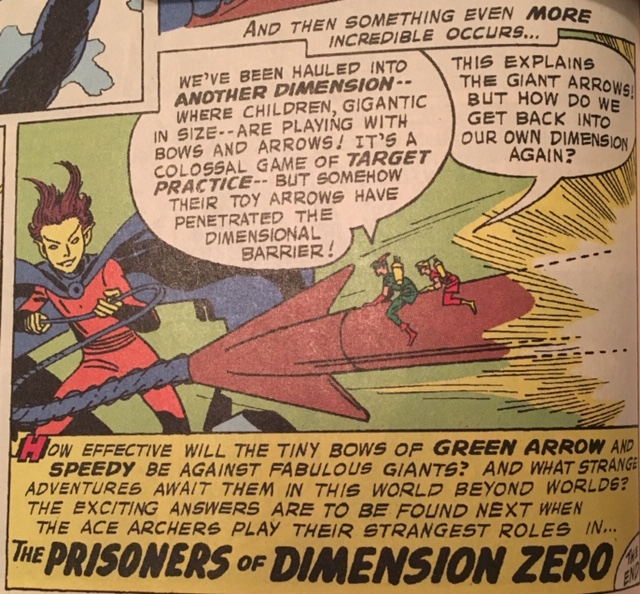 Obviously, Jack Kirby’s art and fertile creative mind are the biggest positives of this story.  These old comics often feel dated, and while that’s true, the two-part nature of this story is innovative for its time.  Kirby was trying to push Green Arrow in a different direction, away from the crime-of-the-month that had been the staple of the Emerald Archer’s tales.  GA had essentially been treated as Batman and Robin with an arrow shtick since his first appearance in More Fun Comics #73 (Nov, 1941).  Kirby’s innovation is an interesting approach to this character.  Evanier points out that the mechanism for the duo’s return to their home dimension is not unlike Kirby’s later creation for The Fourth World tales of the New Gods, the Boom Tube. 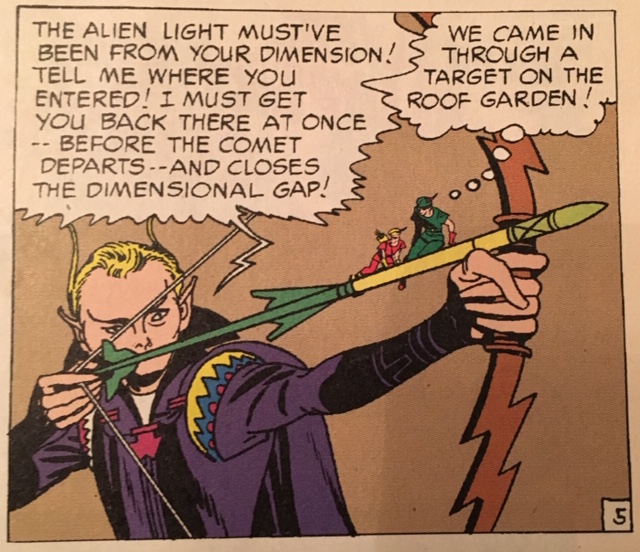 Kirby is in fine form, even when Kirby is off, he’s still better than most comic book artists.  It’s clear that Kirby had  vision for the Green Arrow strip even it it never came to full fruition.  One can only imagine a Green Arrow #1 written and drawn by Jack Kirby circa 1959….

It’s quite surprising that Green Arrow and Speedy are observers in this issue and don’t actually have an active role.  They are way out of their depth and have to rely on Xeen Arrow to get them home.  It does seem possible that they could’ve lent a hand to their extradimensional counterpart, but taken as a whole, “The Mystery of the Giant Arrows” and “Prisoners of Dimension Zero” show that Kirby was working out concepts within the confines of a 6 page second or third tier feature.  He chose not to rely on the characters, but, instead, introduce creative concepts to push the feature forward. 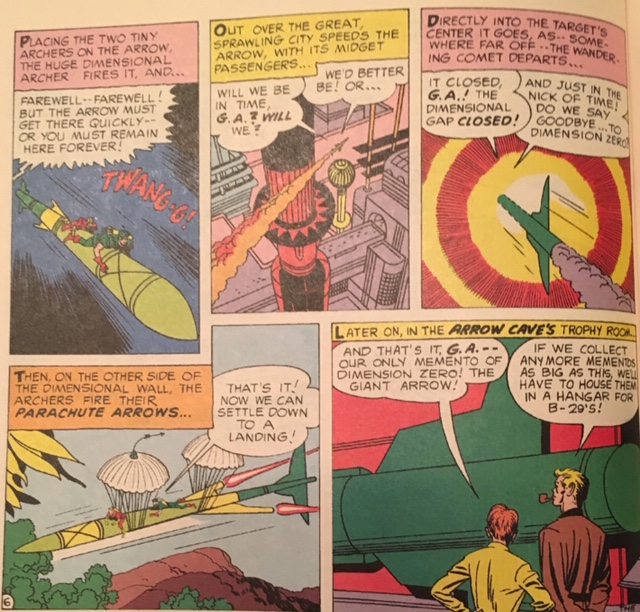 For the modern reader, this story will seem simplistic.  There’s zero character development, and the story relies completely on the sci-fi/fantasy elements of the tale.  Hindered by the 6 page length, it’s not surprising.  Don’t discount these limitations to see what Kirby was attempting.

To the modern reader this story will be little more than an example from a time capsule.  However, Jack Kirby had a plan to make the Green Arrow feature something greater than it had ever been.  “Prisoners of Dimension Zero” demonstrates that the King was capable of introducing new concepts to a staid strip.  This tale serves as a flash of Kirby’s genius.