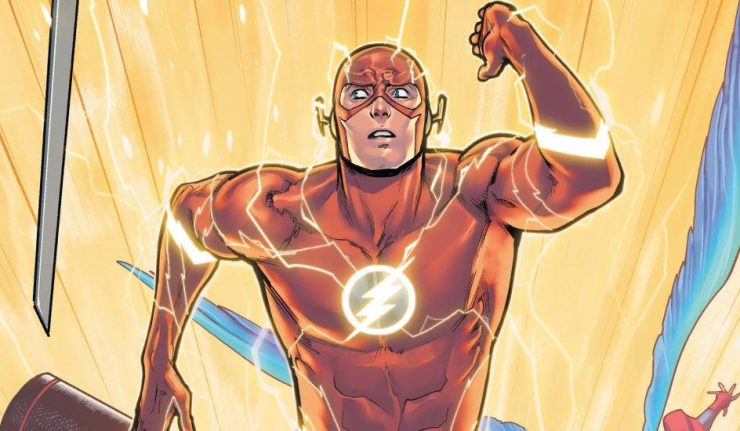 The Flash Annual #3: From the pages of Suicide Squad, Task Force X and Captain Boomerang are on the loose, and the Flash is in hot pursuit! But is he really the hunter-or the hunted? Barry Allen may be the Scarlet Speedster, but at the end of this crossover issue, will he still be the Fastest Man Alive?

A crossover with Suicide Squad seems like an odd choice for a Flash story, but the Flash has some interesting ties with the Squad. Captain Cold recently was in the Squad and the Daniel West version of the Reverse-Flash died one. The clearest connection, however, is that longtime Flash villain Captain Boomerang has been in the group since Amanda Waller first reimagined the Squad during the Legends event.

And Boomerang is at the centre of this story. The issue opens with Boomerang in custody, getting interrogated. Most of the following story is Digger’s account of events. I must say that Williamson makes brilliant use of having an unreliable narrator. Boomerang is clearly embellishing the story to make himself the star.

Boomerang relates his one-on-one victory over Deathstroke, only to to have his captors burst his bubble by informing him that they witnessed the trouncing he actually received from the assassin. But I’m sure that his account of the Squad’s reactions were entirely accurate: “He’s the greatest hero of all time”, “A damn legend”, “Our savior”, and of course “Someday… I’ll have his Boomer-babies”.

I was also somewhat impressed at Lisa Snart’s accurate conclusions about the Flash, especially contrasted with Digger’s. As he tells us, “Now, Golden Glider used to think Flash was some kind of scientist, or a detective. That’s howo he’d track us Rogues down. But I call B.S. I think Ol’ Red Jeans just mindlessly checks every place he can at super-speed and gets lucky”. It’s clear that Boomerang isn’t the brains of the Rogues Gallery.

Even though Barry isn’t the focus of the issue, the ending gives us an interesting glimpse into Barry’s character. He manages to get a glimpse of something good in Boomerang after witnessing him take a risk to help the Suicide Squad escape capture. This prompts Barry to take give Digger a pass this time and allow him to walk away instead of turning him in. Barry is definitely back to his old optimistic self, to give someone like Digger this chance.

And Digger actually seems to consider it for a moment. But it only takes an invitation from Captain Cold to lure Digger back to the criminal life. I do have to wonder if this means that we will see Captain Boomerang back in the Flash’s Rogues Gallery, or if he will return to the pages of Suicide Squad.

I have no problems at all with this story. It was a nice interlude that brought back a fun villain that we haven’t seen much of in the pages of the Flash due to his involvement with the Suicide Squad.

However, this issue might be a bit confusing to readers who aren’t reading the current Suicide Squad title. The Squad’s status quo has undergone a major change. Also, they will be left wondering who several of these people are, as most of the Squad is composed of newly created characters. However, Williamson at least gives a quick introduction to each member of the Squad.

The Flash Annual #3 is exactly what a Flash story should be. Bright and fun, with lots of action and a few nice character moments. And a guest-appearance by the Suicide Squad makes it even better. But the highlight of the issue is seeing Williamson demonstrate that Boomerbutt is capable of being more than just comic relief.