Review: Batman And The Outsiders #13 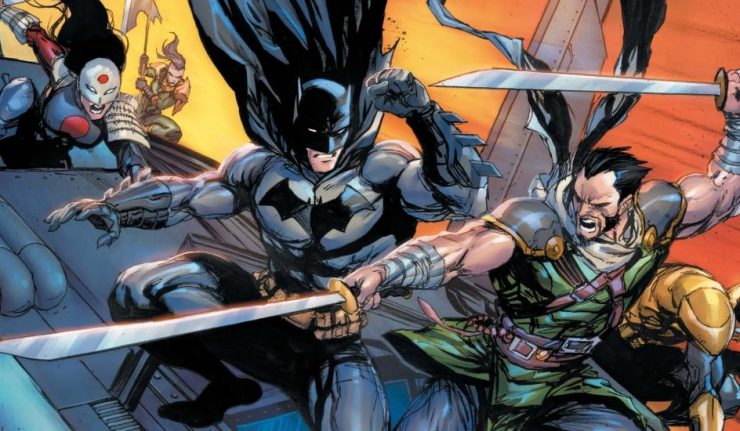 Review: BATMAN AND THE OUTSIDERS #13

Batman and the Outsiders #13: Ra’s Al Ghul has had everything taken away from him. His League of Assassins, his power…even his family. All he has left is his mission to bend the world to his will and save it from itself. He’s more dangerous than ever, and it’ll take the combined full might of the Outsiders team to take him down!

For the entirety of Bryan Hill’s run on Batman and the Outsiders, there has been a tension between Batman and Black Lightning. Jefferson has frequently suspects Batman of holding back information and being manipulative. On the face of it, however, Bruce has appeared to be completely open with Jefferson. He always answers Jefferson’s questions honestly – or at least appears to.

But Bruce has a reputation for being secretive and manipulative. But he gives a plausible explanation for hesitancy to share completely. He states, “It’s not a matter of trust. I don’t share my thoughts until I know they’re useful”. Batman doesn’t care to waste time on explaining his thought processes, waiting until he comes to workable conclusion to share with his teammates.

Batman and the Outsiders #13 has an unexpected, but logical guest star. Since Ra’s Al Ghul has an ancient alien weapon at his disposal, Batman reaches out to the Justice League’s expert on ancient alien cultures: Martian Manhunter. His entrance provided a nice moment of needed levity. J’onn using his shapeshifting power to confuse Black Lightning with the sudden appearance of a second Batman was quite amusing.

Batman also reveals to Jefferson that he’s been working on an idea for his “evolution”. As Bruce explains, “Your suit should do more. Harness your power. Focus it. Enhance it”. It looks like Black Lightning is about to receive an upgrade. It will be interesting to see how this plays out

Meanwhile, Lady Shiva and Katana have a fight over Orphan and the Signal’s future with the Outsiders. If Shiva wins, Katana agrees that the two youngest Outsiders are free to join Shiva against Ra’s Al Ghul, with or without the Batman.

I like that Hill doesn’t waste time in showing us the actual duel between them. With Shiva, the outcome is pre-ordained, so the story jumps straight to the aftermath. Free to choose, Cassandra and Duke agree to join Shiva.

Shiva also gives a rather cryptic statement about Batman: “Batman may not be what he used to be. We may have to save him too”. We know that Bruce is hurting from the loss of Alfred, but does he truly need saving? And is Shiva really interested in saving him, or is she using their concern for the Dark Knight to manipulate the two young heroes?

There isn’t really anything that I can fault in Batman and the Outsiders #13. It would have been nice if the Martian Manhunter’s guest appearance was more that a cameo, but he was used to good effect in this issue. Maybe he or other heroes will make an appearance in the future.