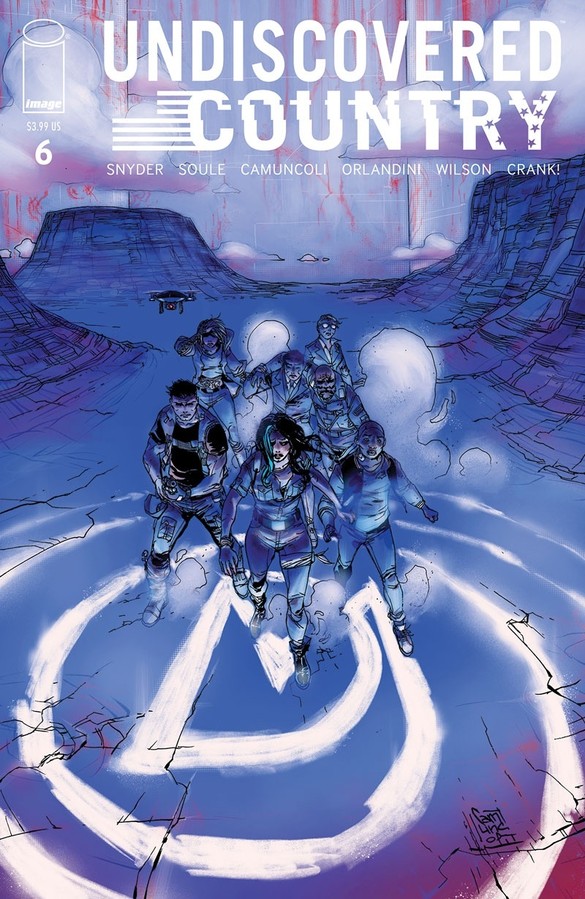 “All you people in collars and chains…  I thought the US was supposed to be a free country!” – Pavel Bukowski

“DESTINY,” Part Six -It is time to leave the zone of the Destiny Man and see what other secrets the former US holds for Charlotte Graves, her brother Daniel, and the rest of the team. Not all will survive, not all will leave—but they just might learn why they’ve been brought to America, and the prize that awaits at the end of their journey through the UNDISCOVERED COUNTRY! 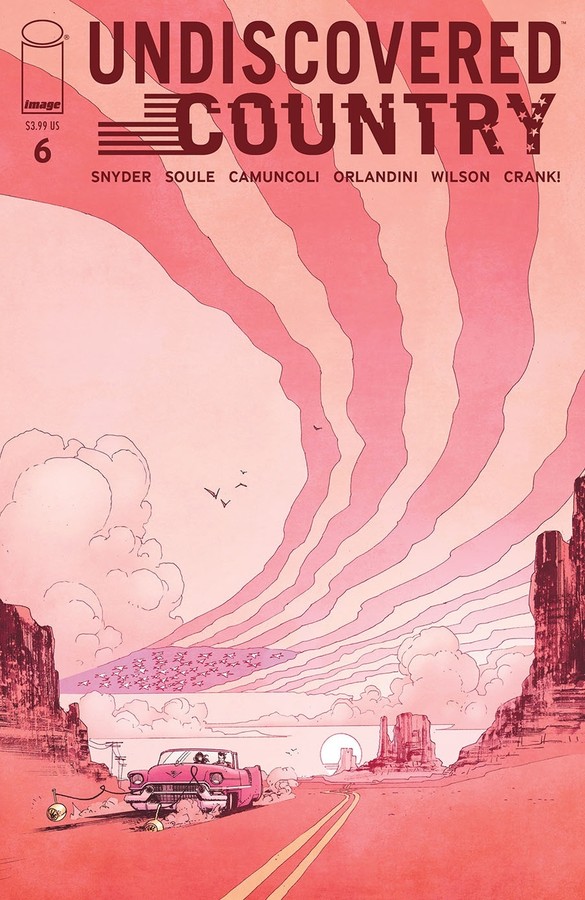 The story continues with Colonel Pavel Bukowski (our embattled POW and helicopter pilot from Issue #1) battling it out on the Wall of Destiny as the Destiny Man and his minions are in hot pursuit of Daniel and Uncle Sam.

Giuseppe Camuncoli and Daniele Orlandini) paint a Mad Max pursuit worthy of a cinema viewing.  When you look at a 1955 Pink Cadillac moving across a purple desert landscape and up in the sky you see an original Space Shuttle adorned with balloons to keep it afloat…. well, that’s normal.

Again, you have to buy that you are in America that has been frozen in time. 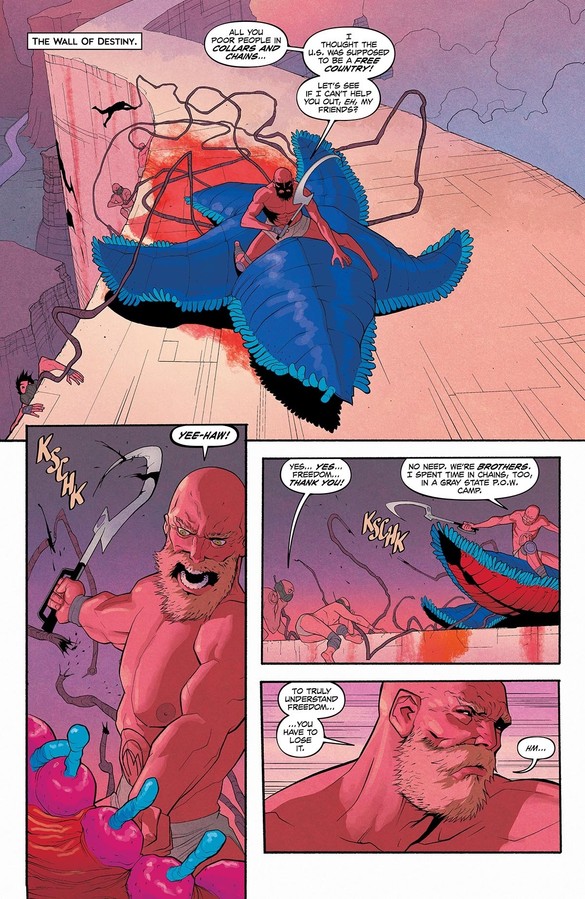 This issue has some interesting military barbs exchanged.  As Pavel Bukowski battles it out with a militia member, he cuts a “weekend warrior” insult that would insult any National Guard member.

Pepper that with some historical statements (Don’t Tread on Me!) quipped by the Destiny Man’s militia and you have to infer that the US is now involved in some sort of altered history communism.

Scott Snyder and Charles Soule have written an intricate tapestry of script that is picking up in its pace, but also creating its own dialect.

The Destiny Man echoes of Frank Miller’s Batman battle with the Mutant Leader (“Batman don’t shiv!).  I keep wondering where Snyder draws his influence as his writing contains Americana Easter Eggs through this series. 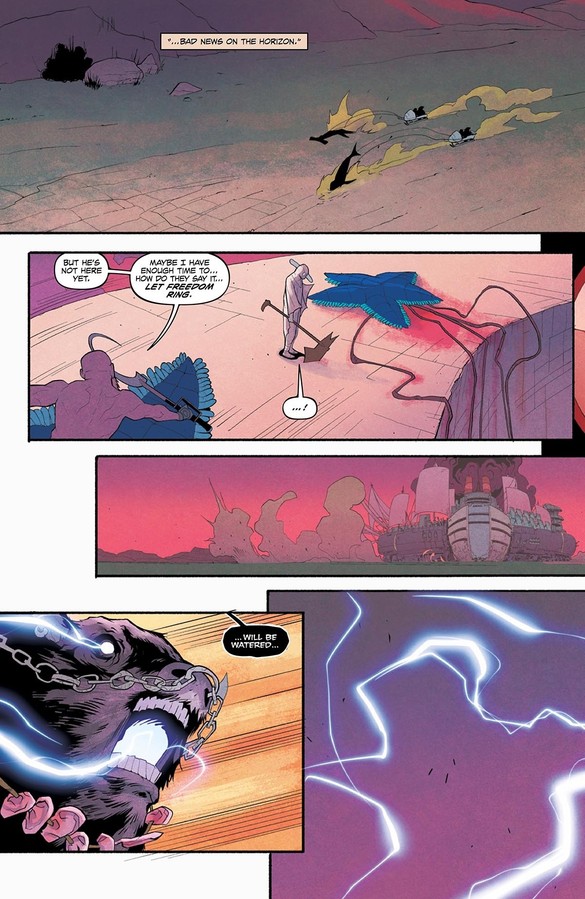 What readers may have originally though was going to be a story of family dynamics between the two estranged siblings, Daniel and Charlotte Graves, has evolved and expanded into a larger story with stand-out characters such as Colonel Pavel Bukowski coming to the fore front in recent issues.

The culminating scenes between Daniel, the Destiny Man and Uncle Sam keep the pace of this comic and the clever dialogue on maximum overdrive.  Unfortunately the body count goes up, our team of seven is reduced, and a new chapter (and landscape) is revealed. 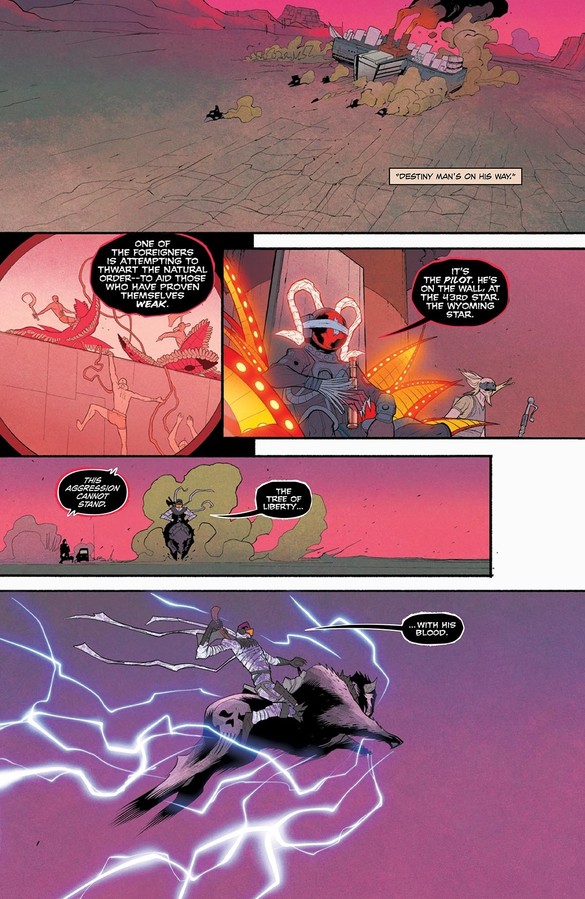 I swear these authors have either watched Lost by JJ Abrams, or watched Community where Abed kept creating alternate time lines.  Does time march on, freeze, or fast forward within these borders?  Is there a cure for the Sky Virus?  I finished this issue with more questions than answers as to where we are going?  Is that a good thing or bad?

What?  It’s not already on your shelf?  Buy this book!  This is still in its infancy and every issue should be gobbled up! It’s ground floor original stuff! I’m both excited and somewhat scared of what is next in terms of time flow within these borders of the US.   This is a really well written and illustrated comic.

Finally, look for the commentary within these pages and heed the warnings.  It’s pretty entertaining on the first go through, but pretty sobering on the second.