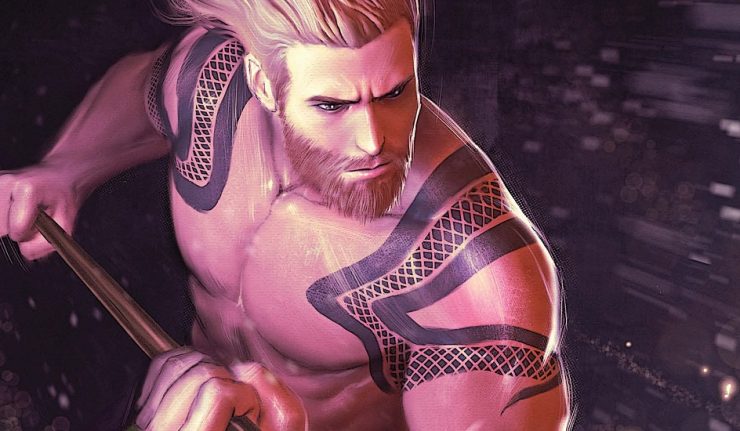 With the help of some of Black Manta’s tech, Arthur, Jackson, Tula and Caille locate Andy and return her to Amnesty Bay, but the gods intervene to find a more secure place for Andy….

Over the past few issues, Arthur continues to act like himself and it’s lovely to feel like you’re reading an Aquaman comic instead of a bizarre acting…not really lookalike….

Aquaman #60 pushes the story forward as not only Andy is rescued, Mera wakes up!  While it comes at the end of the issue, it is a significant moment.  Vulko’s announcement that the wedding is planned for tomorrow…tomorrow???  This heightens the intensity of the reveal.  Arthur’s not even in Atlantis to have a chance to set things right.

Dolphin has a small part to play in the political intrigue between Arthur and Orm and his Dagon Army.  DeConnick has been teasing that Dolphin will have a more significant role, and finally in Aquaman #60 it appears her importance is finally revealed.  Dolphin is a character who’s been around since 1968, but only received minimal exposure at times.  While she fits in nicely with the Aqua-family, she still has the potential to succeed on her own.

This is a fast paced issue that focuses more on plot movement than character.  It’s works, because there’s nothing questionable thrown in.  The intrigue is high and a reckoning is coming.

Caille is quickly becoming an exciting supporting character.  She had no trouble telling off the gods last issue, and she spearheads the search for Andy in Aquaman #60.  Her banter with Manta-Grampa (I laughed out loud) is funny and insightful.  More Caille!

At one point, Barbers were ubiquitous in both Amnesty Bay and Atlantis.  Unfortunately, in recent years they’ve apparently come under fire for overcharging.  We all know Aquaman is busy, but can there be any other explanation for Arthur’s personal grooming?  If you’ve ever been a swimmer, extensive hair, facial and head, get in the way.  When you stop it doesn’t, and all of a sudden it’s in your face.  It’s also unpredictable…the water moves it around, this current, that current…it’s unpredictable.  Aquaman’s current choice of hair cut (lack thereof) and Mr. Natural beard are ridiculously impractical.

Mera has a tiara that keeps it out of her face for the most part, but you’ve got to believe that there’s a subliminal element to her water powers that keeps the hair out of face when she’s underwater.  It may not manifest itself as a water-hand brushing her hair back, but it’s not hard to imagine.

As a plot mover, Aquaman #60 is quite satisfying.  Dolphin and Caille get the character moments in this issue and it works well.  Previous issues have locked Arthur back into his recognizable characterization and the supporting characters getting some attention help expand the scope of connecting with the larger cast.  The tension is pulled tightly when it seems possible Arthur will be too late for the wedding “tomorrow.”  Arthur…don’t be too late!