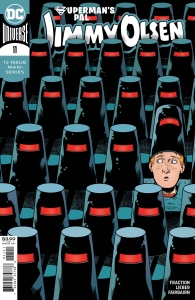 Superman’s Pal Jimmy Olsen #11: Hey, look-it’s issue 11 of a 12-issue series, so it’s the perfect jumping-on point for new readers! Mysteries get solved, criminals are revealed, and a secret ally emerges from the shadows. Want more? There are robots, aliens, and The Daily Planet faces a threat to its existence at the same moment the actual planet faces the same! Now’s the time to get on board, guys!

Matt Fraction has presented us with a rather odd comic book series. At first, it seemed like a random series of bizarre unrelated events. As the story progressed, however, the threads have come together. Now, in Superman’s Pal Jimmy Olsen, we can finally see the overall story. It’s still weird as hell though, yet thoroughly entertaining.

I love how this series continually makes reference to obscure bits of DC history. For example, this issue shows Jimmy appealing for aid from the Scrubb, the alien civilization from Superman Vs. Muhammad Ali.

I love that the Scrubb are portrayed as being “a people who are above all things fair”. Yet, as such, their Arbiter Supreme seems to treat justice on a rather juvenile level. Fingers being crossed, calling “no backsies”, and whether or not a deal is made on opposite day are considered valid legal considerations.

And there is quite a bit of leaning on the fourth wall. The characters might not realize they’re in a comic, but the narrator makes it clear he (or she) knows. For example, we are told, “a whole maxiseries of background gags and throwaway characters rose up en masse… and came out to help their pal… to help out everyone’s pal… Jimmy Olsen”. 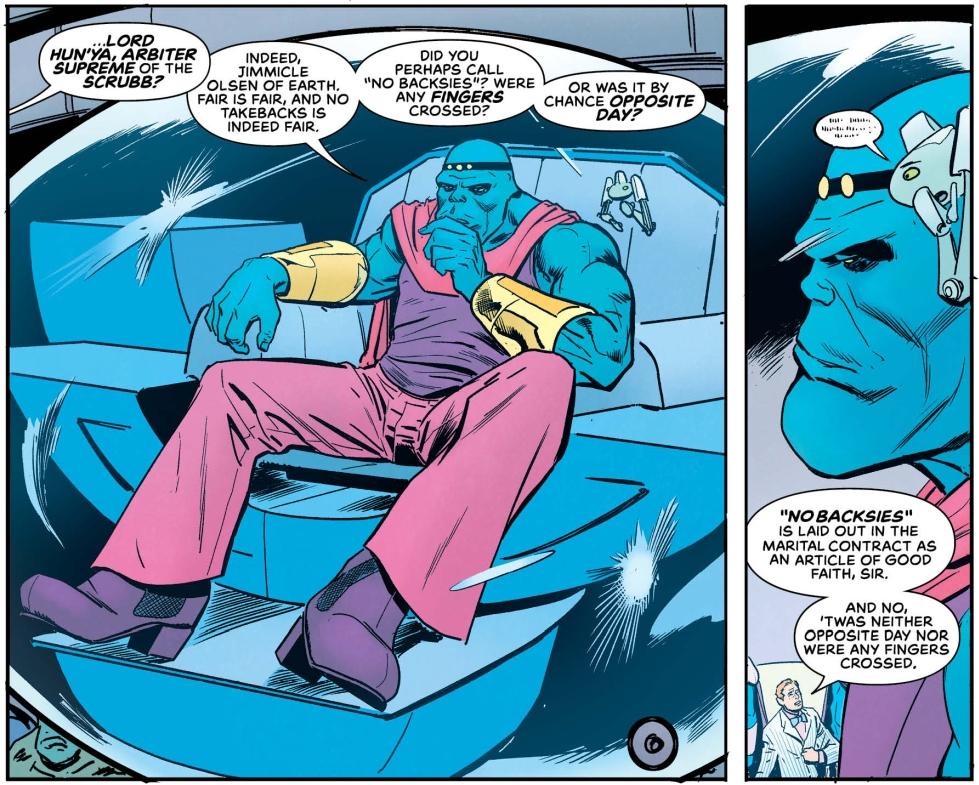 And that’s no exaggeration either. It seems everyone whose appeared in the previous ten issues has shown out to help in the final fight against Jix’s alien suitor – and then some. With this army at his back, Jimmy overcomes the enemy.

After the battle, we see all the dangling plotlines getting tied up. Jimmy and Jix’s marriage gets annulled, and Jimmy and friends plan their future, “…our future…in metropolis!”. But what about the plot to kill Jimmy? We know that his brother Julian is behind that, but he has yet to face his comeuppance.

Well, it appears that someone is on that case. On the final page, we see the issue’s final guest-star, the Man of Steel himself. It seems rather odd that Superman hasn’t been seen much in this series, considering his name is in the title. And he states the same sentiment that many readers might be sharing, “I think this nonsense has gone on long enough”.

As fun as this series is, I don’t see how it can fit in to current continuity. For example, Jimmy references the events of Superman Vs. Muhammad Ali. There’s no way that could have happened in current continuity, as Ali would have been a senior citizen before Superman made his first public appearance. But this series follows directly from events in the Leviathan Rising special, which was in-continuity. This series is rather confusing if you try to take it seriously, so you’re better off not trying. 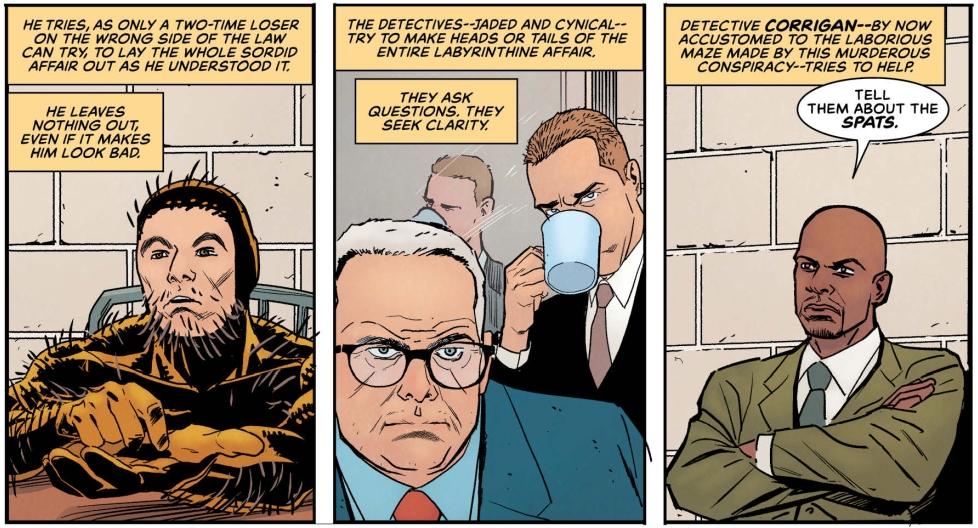 Superman’s Pal Jimmy Olsen #11, serves as a great penultimate issue to the series. It wraps up a lot of the disparate plotlines into a discernable whole. The loose threads are tied up, leaving only the central mystery to be resolved next issue. I love the offbeat comedy in this book and I would love to see DC do more stories that take an off-kilter approach to their characters.