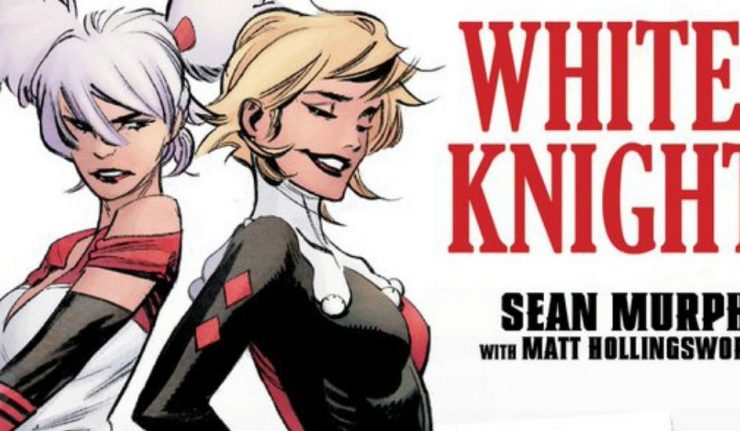 Under the sub-title of “Enter the White Knight-verse”,  announces a “return to the universe of Sean Murphy’s Batman: White Knight, in the form of a Harley Quinn spin-off coming in October. Sean Murphy will co-write the series with wife, Katana Collins, while art will be handled by Matteo Scalera. The team will include Dave Stewart as colorist.

The book inadvertently appeared in a Diamond print catalog (but not in the solicitations sent to press), with DC informing retailers this week of the error and their plans.

“It will be solicited in August’s DC Connect #3 for October on sale.”

So, as fans shalt do, once word of the early solicit hit fans picked it up and ran with it. As they oft do. According to the article, “Readers of a DC Universe forum picked up that a website apparently accidentally received the art and solicitation for Batman: White Knight Presents Harley Quinn #1 earlier this week and listed it in their public database without any announcement.”

Yes, a lot of build-up but what is the purported solicitation text?

“Introducing the first spinoff series in Sean Murphy’s White Knight universe! Two years have passed since Azrael wiped out Gotham’s most formidable villains in Batman: Curse of the White Knight,”

“The Joker is dead, Bruce Wayne is behind bars, and Gotham is still only beginning to redefine itself in a world without Batman.”

“In the wake of it all, Harley Quinn is officially off-duty, struggling to cope with the loss of her closest confidants as she improvises her lonely and hectic new life as a single mother to the late Jack Napier’s twins,”

“Against this unstable new ‘normal’ the stage is set for Gotham’s next criminal uprising. From the shadows, a visionary and elusive mastermind called the Producer is seizing this opportunity to assemble a colorful crew of villains and make his mark on the city.”

“His first recruit is known as Starlet, a striking and resourceful serial killer who targets Gotham’s Golden Age film stars and meticulously paints her victims black and white in chilling homage to their vintage blockbusters,”

“The GTO has stepped in to investigate alongside eager young FBI agent and criminal profiler Hector Quimby-but when the latest gruesome crime scene reveals shocking clues that suggest an impossible link to the Joker, the team turns to Harley as the one person whose intimate knowledge of Gotham’s underbelly could fully crack the case.”

“In Batman: White Knight Presents Harley Quinn, Harley will seek guidance from Bruce and take Agent Quimby under her wing as she balances work and motherhood and inches closer to Starlet- but things get personal and trust will crumble when all the players in the Producer’s twisted script come into full focus,”

“To protect her children and Gotham from a fatal third act, Harley must once again flirt with madness and confront the weight of her own past with the Joker and Batman.”

So that is it. What is presently known of Batman: White Knight Presents Harley Quinn. Issue #1 is listed as a 48-page (no doubt prestige format) comic, priced at $5.99 each. At the time of this article, there is no information as to the length of this story. Whether it is a one-shot, limited series, or ongoing. But in light of the previous two arcs to date (Batman: White Knight and Batman: Curse of the White Knight) I assume ongoing is off the table. To Be Continued.

Update : As of this article, I have found Issue #1 posted up for Pre-Order on Things From Another World. However the exact details are not quite clear. No comic info, no covers despite their posting several versions (including a over $100 copy that is graded), but it is listed for a September 22nd 2020 release. Also? Its listed as Issue #1 of 8. Now again this is a pre-order that might be rescinded down the line, but if this holds firm then we can expect a eight issue arc for the title. But that is a thing for the future, so once again To Be Continued…