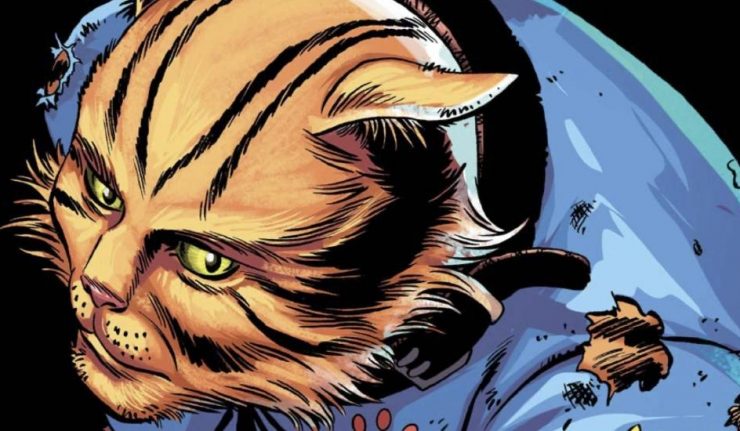 Captain Ginger Season Two #4: Tragedy strikes the space cats as Sergeant Mittens and Deena search for their missing captain. Stranded on a world of dogs, who can they trust?

In Captain Ginger Season Two #4, our feline protagonists and their canine hosts are shown debating amongst themselves whether they can trust each other or not. Will they hearken to the instinctual distrust between their two species, or will they use the power of reason to work past those instincts?

I was quite amused to see the dogs conferring over a game of cards, directly re-enacting the “dogs playing poker” scene that is often seen in tacky paintings.

The cats have little choice but to accept the assistance of the dogs, but there seems to be two factions amongst the dogs, one that is inclined to extend friendship and another that puts forward the idea of pretending to do so. The question is put to the dogs’ leader, “Do we trust these cats? Or do we pretend to trust ’em… till we can gain the advantage we need?”.

Thus, we are left wondering which choice their leader has made? Are these dogs going to prove to be allies or will they betray the cats?

This issue also sees the death of Science Cat. The cat scientist urges both species that they have to work together to survive. But he does offer an important fact about their common enemy. He has deduced that the Lumen are “unable to function well on planets. Atmospheres filter out their power”. Perhaps the key to the survival of both species is to remain on Dogworld.

The dogs give Science Cat a funeral according to their own traditions, which the cats surprisingly find quite touching, and superior to their own way of dealing with the dead. Once cat notes, “Beats thowing bodies out the airlock”.

Captain Ginger usually includes a couple short prose stories, but this time around, the complete first issue of Billionaire Island #1 is included, allowing readers to check out that title without any extra expense.

Last issue, Captain Ginger became a digital-only title. This is definitely a negative for readers that prefer to read comics physically and don’t want to until the issues are collected in a trade paperback. However, this title is well worth either waiting for or switching to digital – or both.

As a cat person, I love this title. Their cat-like instincts provide for some amusing humour, but they are ultimately much like human beings, making the characters quite relatable to readers. And it’s a pretty good science fiction adventure story as well.