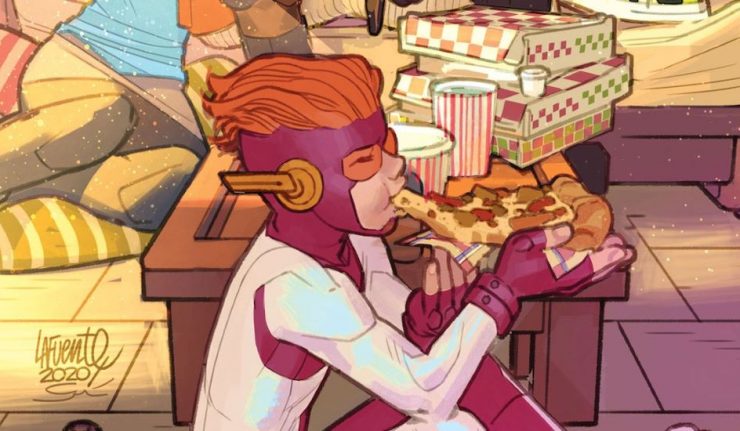 Impulse unleashed! Bartholomew Henry Allen II has traveled to the edges of space and time-and along the way, he’s discovered truths that he’s kept from even his closest friends. Until now. The truth behind the legacy of Young Justice is revealed! What does tomorrow hold for Young Justice?

Scott Godlewski and Gabe Eltaeb shine in Young Justice #16. There is so much motion in this as we chase Bart through time, space and the multiverse. Because Conner and Bart run around, the art has to capture them but show the motion. It is easy not to capture motion without the characters being blurry. That would be the photorealistic way to cover this issue, but they don’t.

Of course, Bart leaves the red streaks behind him, but Connor doesn’t. Instead, they use his hair to show us his motion. It is a small thing, but if you take a look at the difference between Connor running and Connor standing still, you can see the difference. It is really smart. I love the background when Bart is running at full speed. That is where Eltaeb is at the top of his game.

This fight scene, which is kind of pointless to the plot (see below), is really well done.  The action feels real. Connor’s punches are tooth rattling real.

Young Justice #16 is about Bart Allen, so why is there a ten page random fight scene with Conner and some monster who is a knock off Savage Dragon? What was that about? There were other ways to find Conner into a place to have the conversation he has. We don’t always need a giant fight scene. This is exactly the problem with most DCEU movies. They tell a great story and then end with a 20 minute fight scene. Sure, the fight scene is in the middle of this book, it just was not needed.

Young Justice #16 isn’t sure what it is supposed to be. It really sets up the future of the series. That is great, but it doesn’t trust the readers to be comfortable by watching Bart and Conner sit and talk. Tim’s appearance at the end is awesome, he is my favorite, but it feels retconned. Shouldn’t the team leader, who is the smartest person in any room he is in, be there the whole time? I have hope for the future.