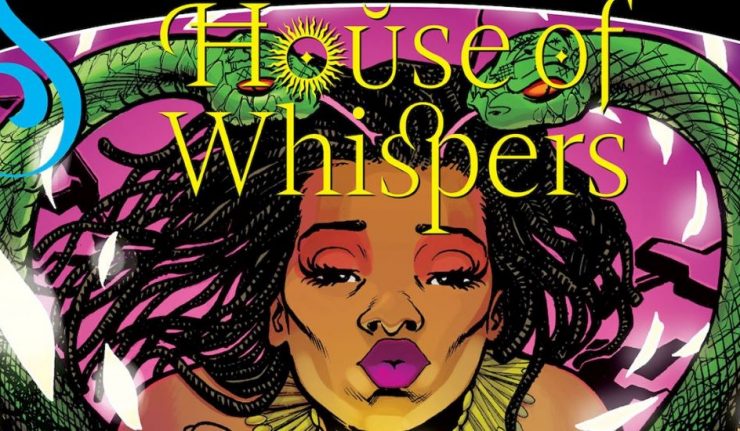 The time has come for both Erzulie and Poquita to take back the power of their twinned Houses…but Anansi will stop at nothing to keep his treasures! The sweeping epic of Erzulie’s war with the trickster god comes to an explosive conclusion!

House of Whispers #22 unlike the entire series features Madame Erzulie in all of her amazing badassery. She is the Queen. She is powerful. She is fan-freaking-tastic. I love how strong she is. The star, besides her, is, as always, Domo Stanton.  He was always the best part of this comic. He is still the best part of this comic. His art is stunning, haunting, terrifying and beautiful.

Look at our hero in that picture above. She is so powerful. She is so in control. The focus is her. We can’t help but stare at her. Zac Atkinson’s colors are perfect too. Everything about how this series is drawn is absolutely beautiful. I hope DC decides to keep Domo on the team and give him another book (or two or three) to draw. Below you shall find one final example of Domo’s excellent artwork.

I feel like this is the character we were always supposed to know, but we never had a chance to get to know her. To that end, they had to cram too much in this final story. I know they’ve had a few months to get this ready, but it was overstuffed. That has been problematic consistantly.

House of Whispers #22 brings the series to an end and it shows why it never really worked as a series. This issue, unlike the vast majority of the previous issues, actually focuses on one story. Madame Erzulie, who is honestly an amazing character, gets her time to shine. She has been short changed for the whole series. It was actually really nice to see her shine. Unfortunately, it was far too late. The side supporting cast constantly changed and so we never had anyone about whom to care. This is a perfect ending to an imperfect series.