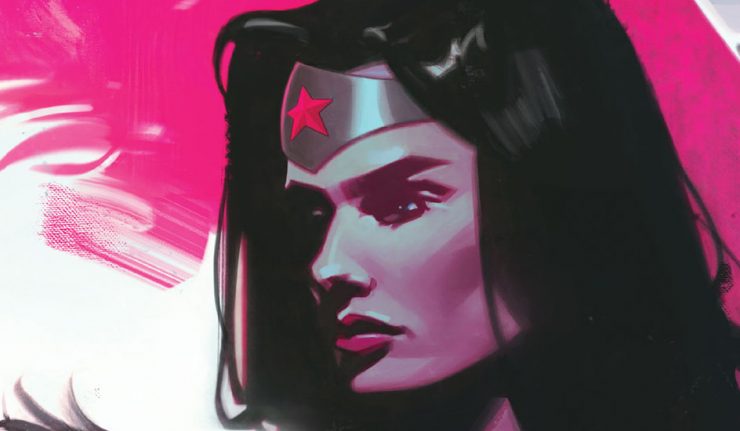 Wonder Woman puts herself on the line to save Warmaster from an ancient power-the Phantom Stranger! But Diana is out of her depth, and the Stranger’s power knows no limit! Is our hero prepared to break eternal law to save her former friend? Or is the Circle of Eternity’s judgment exactly what Warmaster deserves?

The cover by Robson Rocha, Daniel Henriques and Romulo Fajardo Jr. is fantastic. I love that it sets the stakes of the issue by displaying the power of the Phantom Stranger with Wonder Woman struggling below. Aesthetically, I love dichotomy of rain and lightning on top and fire on the bottom.

The interior art is phenomenal. Emanuela Lupacchino is one of my favorite pencilists and she always does great work with Ray McCarthy. I love their style.  I especially love when Lupacchino draws Wonder Woman. The book looks fantastic.

The issue is mostly focused on the fight between Diana and the Phantom Stranger. And that’s great when the art team is as terrific as this one. It’s a great fight scene; it’s big and crazy. I also think it’s dynamic and well paced.

I love how the issue deals with the potential of redemption versus damnation. Diana fights for Warmaster’s soul because Paula can be better. It doesn’t make everything she did okay and it won’t be easy but there is a path. There’s something optimistic and appealing about that. Diana wants to save people and that takes more than punching a thing as cool as that can be. There’s a nuance to how Wonder Woman deals with her enemies that Steve Orlando nails.

I love the conclusion to this story. Rebirth separated Diana and the world away from Themyscira firmly. And that was a great way to get down to Wonder Woman’s roots as DC found its way again. But it makes perfect sense to further that story by eventually allowing Themyscira to rejoin the world with Diana as ambassador. That’s a dynamic I’m excited to see.

There no negatives worth mentioning.

I haven’t loved this story but this is an excellent conclusion. The fight between Wonder Woman and Phantom Stranger is thrilling. And, as always, Orlando writes Diana perfectly. Combined with art that I adore, this is a strong outing.