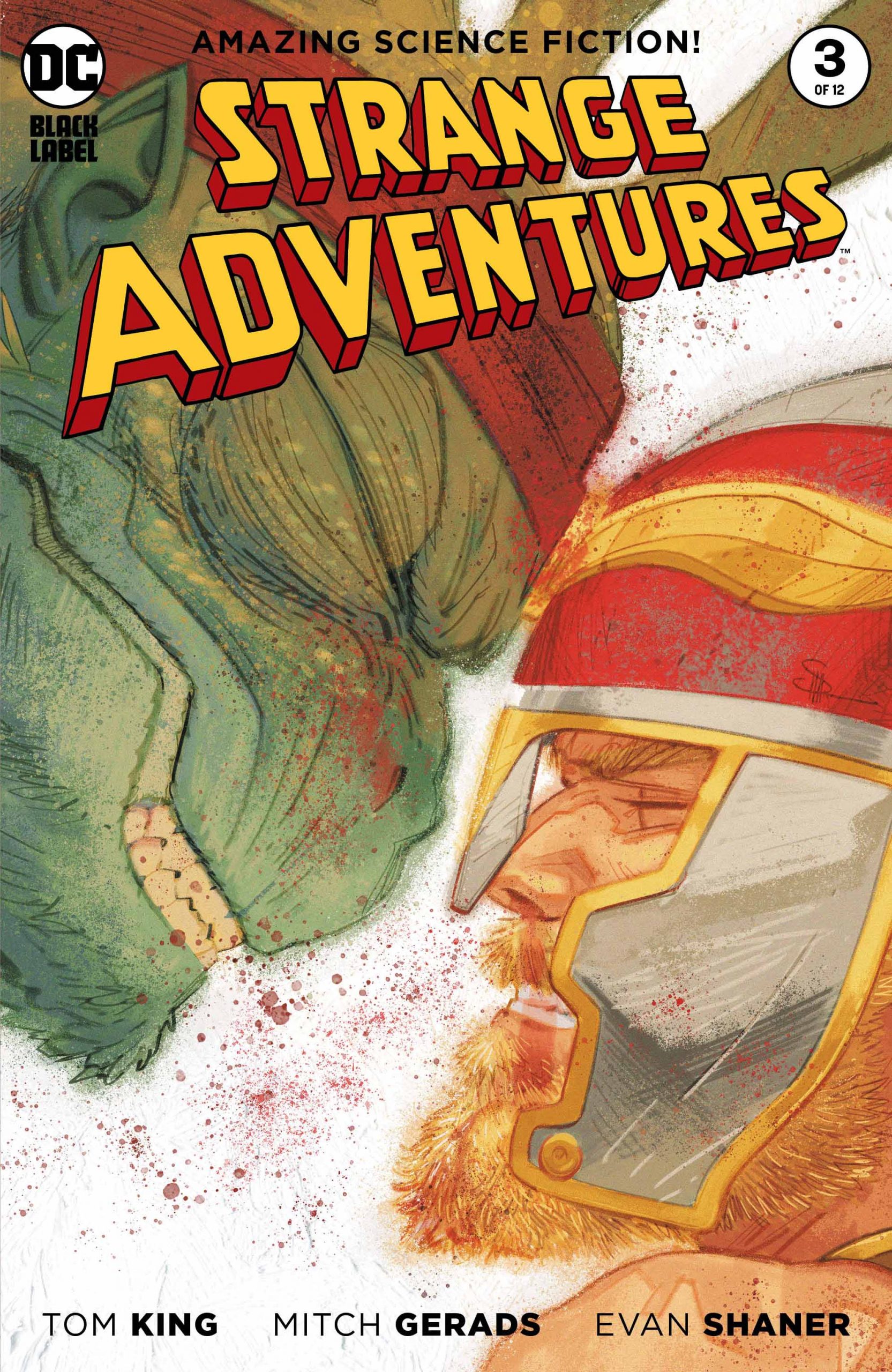 Mr. Terrific’s investigation raises the ire of Alanna as she and Adam check on their legal rights.  Plus, Adam tries to pump fellow Justice Leaguer’s, Superman and Hawkman for information on the specifics of Mr. Terrific’s inquiries.

Whether you like what King is doing with the characters in Strange Adventures, he’s doing the right thing by focusing on character.  Strange Adventures #3 sees Adam and Alanna fighting back a bit against Mr. Terrific’s investigation.  Adam seems too desperate to find out what’s been said about him and Alanna just seems insulted, perhaps overly so.  By keeping the book centered on the characters and their reactions, it keeps the narrative about them and not the war with the Pykkts or even the mystery.  Last issue was just as revealing about Mr. Terrific.  This approach is a deeply engaging and emotional hook into the reader’s soul.  Even the subtle moments that Adam shares with Superman and Hawkman are executed perfectly.  And, Batman surprising Alanna is unexpected and provocative, as well. 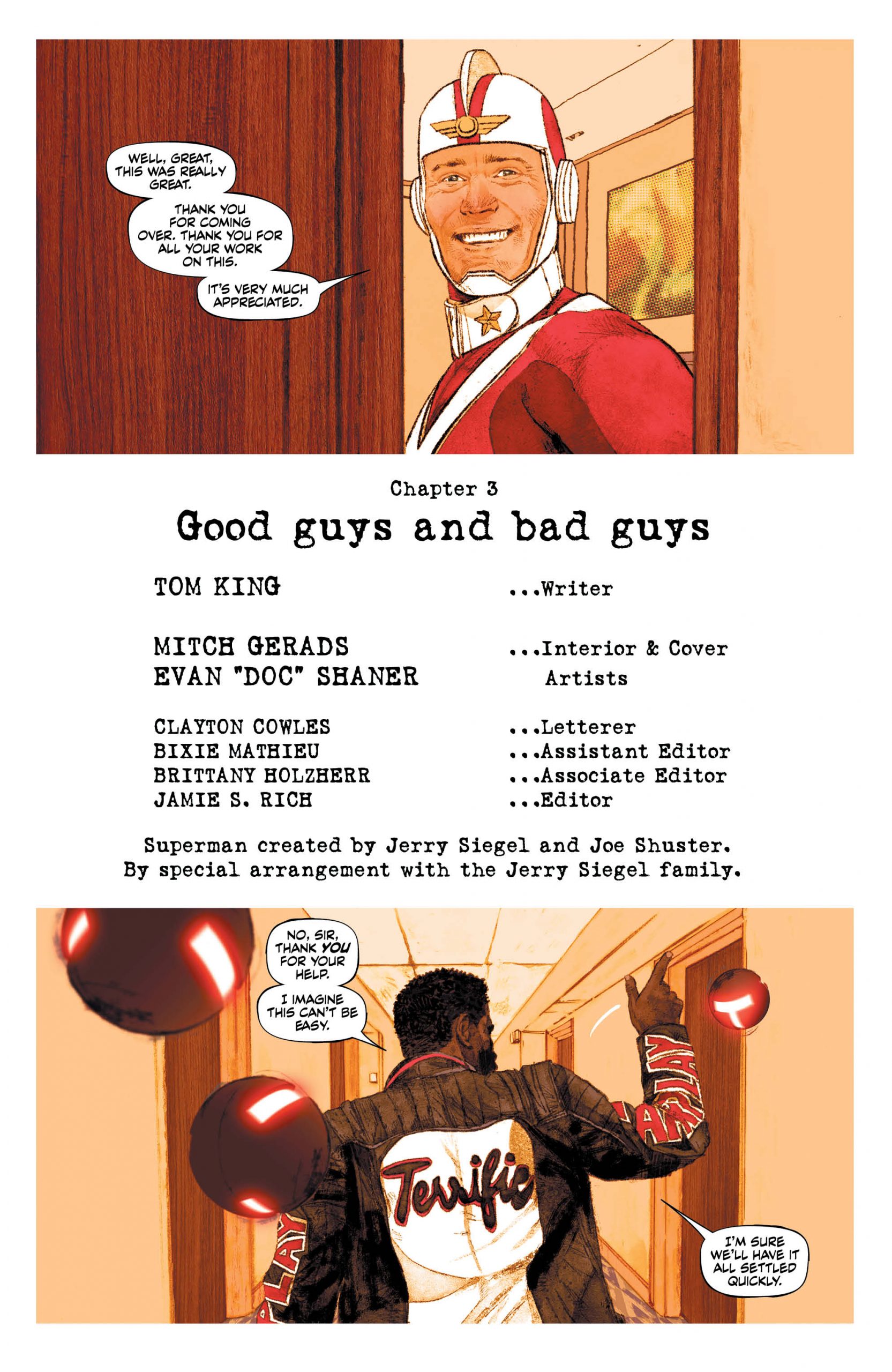 One can’t say enough about the stupendous job that Gerads and Shaner are doing with the art.  There isn’t a page in Strange Adventures #3 that isn’t a complete work of art top to bottom.  It’s got to be the best looking comic of the year so far.  Their two-man approach to the stories works not only visually, but as a storytelling technique to guide the reader through past and present times within the story.  There’s even a sequence in Shaner’s section that appears to slowly morph into Gerad’s style…and it’s not distinguishable as to who is actually drawing those panels…  WOW!  It’s unmistakable when you get to it.

In each issue, Tom King has used a quote by a famous comic book creator that underscores the point of the issue.  This issue’s quote by the great Wally Wood relates directly the the part of the issue that takes place on Rann in the past in the war against the Pykkts.

“There were good guys and bad guys.  And the job of the good guys is to kill the bad guys.”

On the surface it seems like Wood could be discussing the simple black and white nature of many old comics, or even old stories that were told in simple extremes of good and evil.  However, in this case it relates directly to Adam’s actions in the past when he kills in the name of saving Rann.  The reader can almost feel the weight of his actions on his soul.  It’s a very powerful moment.  Additionally, in the given situation, it doesn’t seem that the individual Adam kills is necessarily one of the bad guys.  He has to kill this person apparently to gain favor of this group of individuals in order to get them to help against the Pykkts.  It’s a complex situation that is not easy to make sense of in its entirety.  Moreover, Wood’s quote goes to the heart of it and suggests that there’s a whole lot more to things than simple black and white.  Without knowing the context, I would guess that Wood is discussing his own experience, perhaps, in the military and that even knowing he was supposed to be one of the good guys, it never felt so simple as good vs. bad. 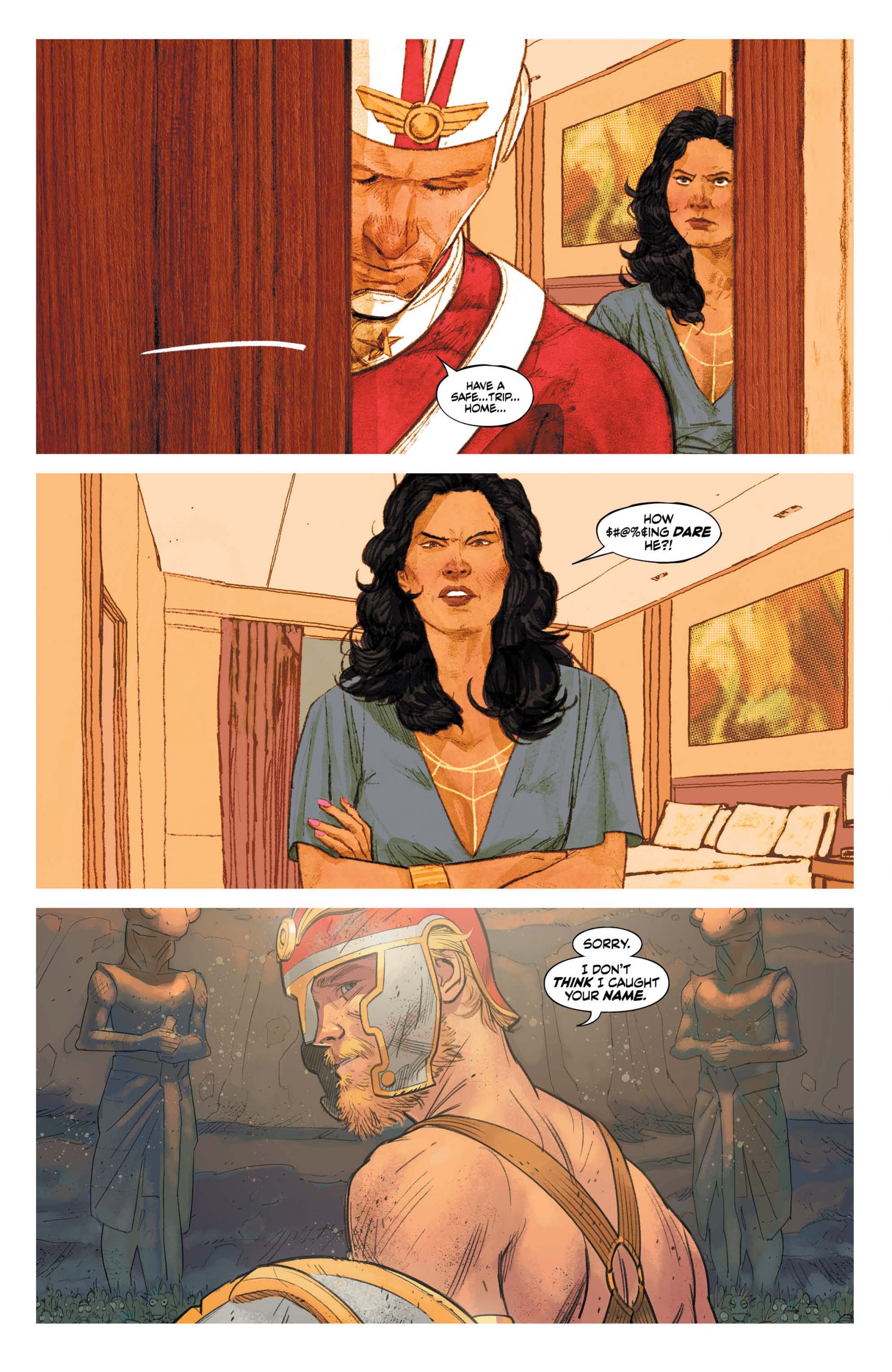 This gray area suggested in Wood’s quote is rife with story ideas.  Adam Strange is a character that has had numerous tales featuring invaders and warlike foes.  It’s understandable that King would like to explore this as it certainly is reflected in his own real world experiences in the CIA.  It can’t be easy to do that kind of work, believing you are the “good guys,” but doing things that don’t necessarily fee like the work of a good person.

Lastly, there’s a point in Adam’s fight on Rann that evokes John Carter of Mars by Edgar Rice Burroughs.  When he seems out, and there’s no hope, Adam finds a way to prevail.  Alanna on the sidelines has no doubts, and it’s wonderful.  It’s not hard to imagine Dejah Thoris and John Carter in this scene instead of Alanna and Adam.  “I still live!”  These are the words John Carter lives by.  This is an excellent homage by King.

While technically this story is beautifully illustrated and well scripted, there are some elements that fall into the category of “troubling.”  This issue seems to double down on Alanna’s smoking.  It just seems like an odd element to me.  And, at this point it’s hard to tell if this is really just a negative or a clue to what’s really going on.  Why would an alien, who’s lived her entire life on her home planet take up smoking in an age when it is no longer “in fashion.”  As stated in the review of Strange Adventures #1, it makes it appear that either Alanna or Adam AND Alanna are being impersonated by individuals who THINK they know how they should act on Earth, but who have bad information.  It’s hard not to be able to get around this.  It is one of those elements that is either significant or simply wildly out of place. 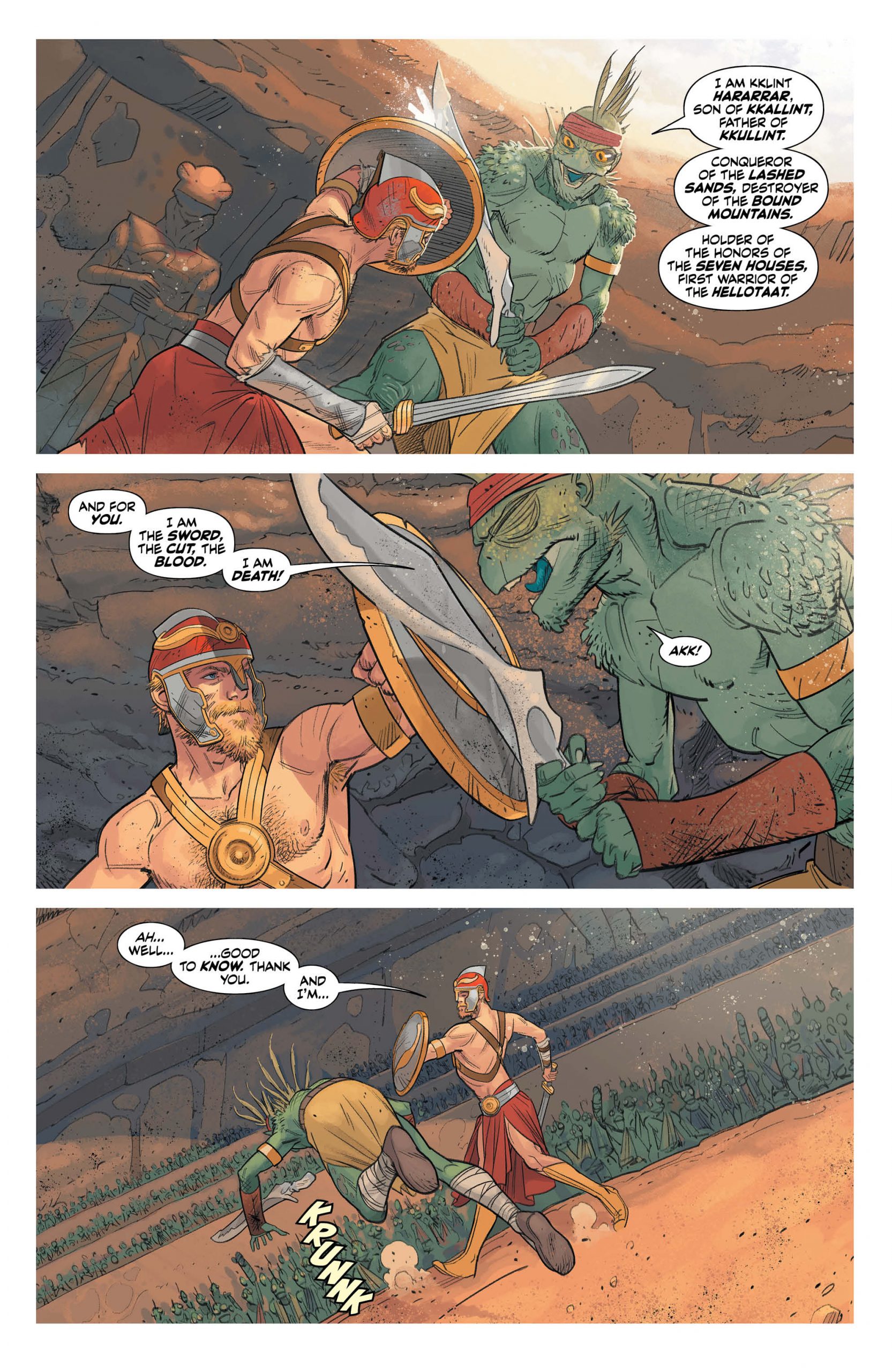 Alanna is clearly “all in” no matter what Adam has had to do.  This could simply be King contrasting Adam and Alanna’s personalities.  Adam appears a bit more sensitive to what he’s doing and what it’s doing to him.  Alanna comes across almost callous in her reactions.  Again, it won’t be obvious if these are carefully planned clues or simply King writing characters that don’t seem completely congruous with their established portrayals until the climax of the series.

In the review for issue #1 I also questioned the spelling of Adam and Alanna’s daughter’s name.  Traditionally, it’s been Aleea.  In issue #1 it’s Aleena.  Now in issue #3 it’s Aleea again.  It can’t be sloppy editing or misspelling.  It has to mean something.  Couple this with Mr. Terrific’s belief that she is not dead and it deepens the mystery even more.  Now, what exactly it all means is still up for grabs.  However, these things all point to something really big being covered up.  One just wonders if it will reveal the entirety of Adam’s “past” as described in the book IN the comic is a a fake and the Adam and Alanna we see are Pykkt agents preparing Earth for the invasion.  And, at this point, I’m not sure if it’s a “negative” or a “positive” at this point! 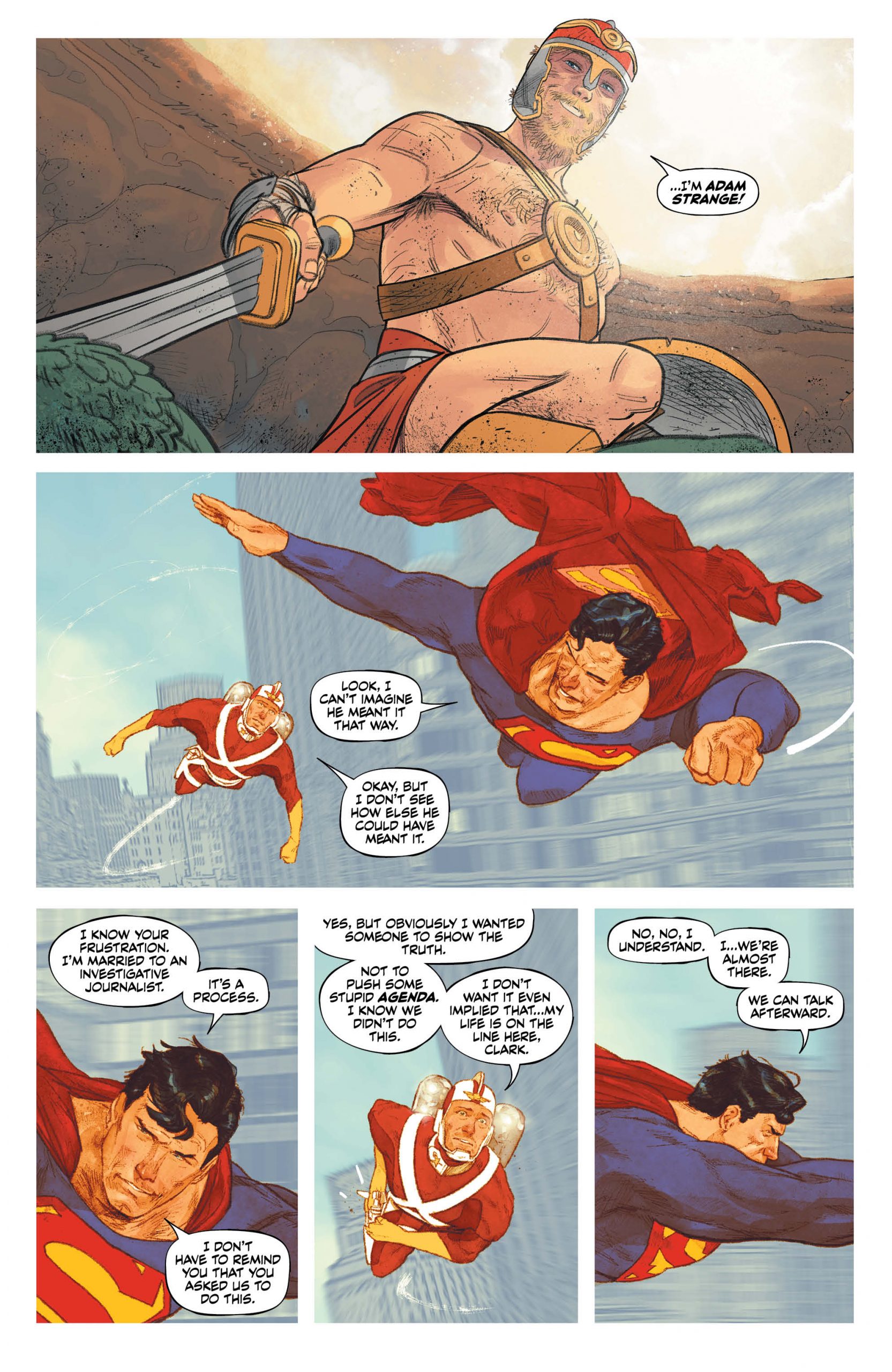 Strange Adventures #3 is another excellent installment of the latest comic to feature the adventures Adam Strange.  It’s wonderfully illustrated by Mitch Gerads and Evan “Doc” Shaner.  Their work alone is worth the price of admission.  Tom King is genuinely writing a fantastic comic.  However, and it is a potentially significant “however,” one can’t help but be perplexed by the anomalies in King’s script.  His track record with Heroes in Crisis shows he’s not afraid to permanently damage a beloved character.  Adam Strange’s reputation is hanging in the balance with this series.  So far, even if King assassinates Adam’s character, the journey is a thousands time more enjoyable and well execute than Heroes in Crisis.