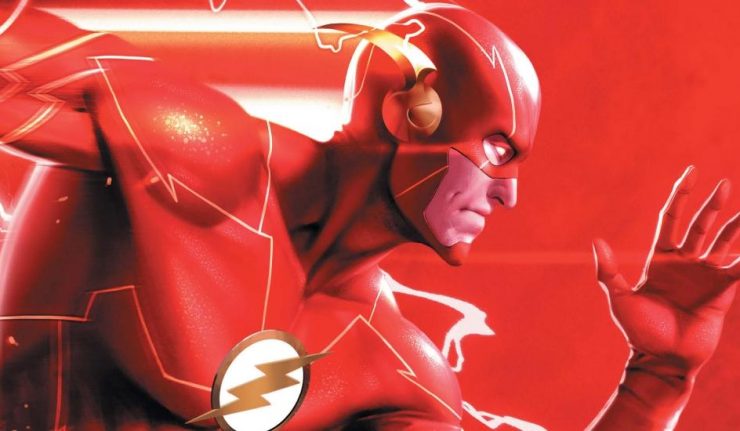 The Flash #758: “Legion of Zoom” part two! Central City is reeling from the recent attack, and Barry Allen lies broken and helpless! To uncover his foes’ next target, the Flash must solve a mystery from his past…but before he can, he’s attacked by the corrupted Tornado Twins-his children from the future!

The Reverse-Flash’s Legion of Zoom has launched a number of attacks on the Barry’s life. The targets were all places of special significance to Barry. Even the duration of the attacks were intended to deliver a message: “The attack on Central City lasted five minutes and thirteen seconds. Five. Thirteen. May 13. My birthday”.

These attacks are aimed directly at Barry, to demoralize and keep him off balance. However, Barry does have one way to find Thawne. He explains to Iris that he has to do “something I hate. I have to think like Thawne… and I hate ever letting him inside my head”. It seems somewhat ironic that all the negativity that Barry had to work through during Williamson’s run has allowed him the capacity think like Thawne, as distasteful as this is to Barry.

I also like the juxtaposition between Barry’s past and his future that Williamson presents us with. The past is represented by Barry returning to his childhood home, finding his mother’s copy of Flash Comics #1. It is at this moment that Barry is confronted with his and Iris’ future children: Don and Dawn Allen.

For newer readers, Williamson fills us in on the backstory of the Tornado Twins, which is ties back to the time Barry and Iris spent together in the future before his death in the Crisis On Infinite Earths. Their children were corrupted by Thawne and turned against Barry.

It’s worth noting that the twins’ origin story is from the original pre-Flashpoint continuity, not the New 52/Rebirth continuity. Clearly, there is still some mixing of the timelines going on – or are they really separate timelines? I have a feeling that Williamson will bring some resolution between the current timeline and the pre-Flashpoint memories that both Barry and Iris retain some memory of.

This also makes me wonder if Wally will figure into the storyline before Williamson concludes his run. If not, Williamson has stated that he’s not quite finished with the Flash when it concludes.

Also, I am pretty sure that the Flash Comics issue seen this issue is foreshadowing Jay’s imminent return. After all, Williamson’s Jay Garrick story in the The Flash #750 promised that Jay would be showing up, and there’s not much time left.

Near the end of the issue. We see Thawne vibrating into Barry’s body. Somehow, this allows his mind to take control of Barry’s body. It seems that his remark about letting Thawne into his head was another deft bit of foreshadowing.

But where does this leave Barry? The Flash #758 ends with Barry trapped without his speed in a formless void. Barry tells us that wherever he is, it isn’t the Speed Force. But, to make matters even worse, Barry is attacked by zombified versions of Jesse Quick and Max Mercury. And they do have their speed powers.

But something about how Jesse and Max are shown seems familiar? Where have we seen something like this before? Well, if you cast your mind back to The Flash #55, you might recall Barry seeing a vision of Wally in a very similar condition. I’ve often wondered what was going on with that. Little did I expect that Williamson was laying the seeds of something he was going to come back to 42 issues later. That is next-level planning. Bravo.

I also noticed that although the rest of the issue is drawn superbly by Christian Duce, that the final epilogue with Max and Jesse was drawn by Scott Kolins, who drew The Flash #55. That was what confirmed the connection to that issue for me. Bringing Kolins back to give the undead speedsters a consistent look was a stroke of genius. Kudos to whoever had that brainstorm.

Nope, no criticisms this issue. Williamson’s writing is top form this issue, as is Christian Duce’s art, not to mention Scott Kolin’s two pages.

Wow. Williamson’s Flash epic still continues to get better and better. The Flash #758 shows us that the seeds Williamson has been planting his entire run are bearing fruit. It’s apparent that this summer is going to be an epic one for Flash fans.