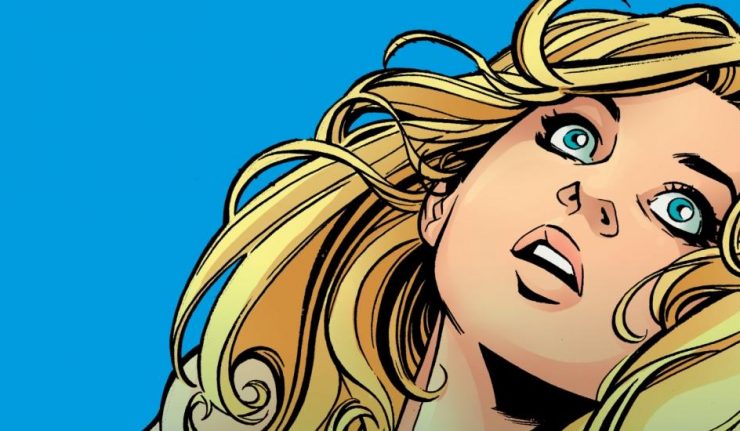 Supergirl: Being Super: Kara Danvers isn’t any different than any other teenager in her hometown. Problems with school, problems with boys, problems with friends. But while growing pains shake up Kara’s world, a series of earth-shaking events hits her hometown, leaving her with with the choice of blending in with the crowd or being different. Being an outcast. Being super. This reimagining of Supergirl will appeal to fans of all ages and readers new and old, as the Girl of Steel flies face-first into the struggles that every teenager faces.

Up to this point, DC’s graphic novel lines for younger readers have been original works. Supergirl: Being Super is the first to feature a previously released story, which DC originally released as a miniseries. Overall, this was probably a wise decision, as the story seems to fit better in the Graphic Novels For Young Adults line than it did as a regular DC book.

When the book first came out, I wasn’t sure what to make of it. It was unclear whether it was meant to fit into the Rebirth continuity. Mariko Tamaki appears to have given Kara her cousin’s origin story. Kara arrives on Earth at a much younger age, and her rocket was found by a kindly farmer couple who adopt her, not by her cousin Superman.

The younger readers books are outside of continuity, so questions of the story’s canonicity are moot. We know that this isn’t the DCU going in, but a standalone story. So, the story isn’t bogged down by the reader trying to figure out how it fits with the other Superman-Family titles.

Removing Superman’s involvement works well for the story, as it distances Kara’s story from her more famous cousin’s. This focuses the readers in on Kara’s story. She is a heroine in her own right, not just a female version of a more popular hero. In fact, Superman is barely even in the story, only putting an appearance at the very end of Kara’s coming of age story.

And it is a very good coming of age story at that. This is the story of Kara’s search for identity, as she learns where she came from and what she wants to do with her life. She learns to accept and use her powers to become a true heroine.

I hesitate to list this as a negative, as it’s more a matter of personal taste than a fault of the book. This edition of Supergirl: Being Super has been recoloured by Jeremy Lawson, replacing the original colours by Kelly Fitzpatrick. Lawson’s colours uses a more subdued palette, in line with the other titles in the Graphic Novels For Young Adults line. Fitzpatrick’s approach was more in line with traditional superhero comics.

However, Lawson’s colouring is equally as good. He does a fantastic job of conveying the mood throughout the story. And the subdued palette gives the book a more artistic feel than a typical superhero story. I just prefer the standard colourful approach.

Supergirl: Being Super is a great story of a young girl’s quest for identity. This book is an ideal book to introduce young girls or boys to the world of comics. Even though this story was not originally a DC Graphic Novels For Young Adults title, it fits right in with these great titles.