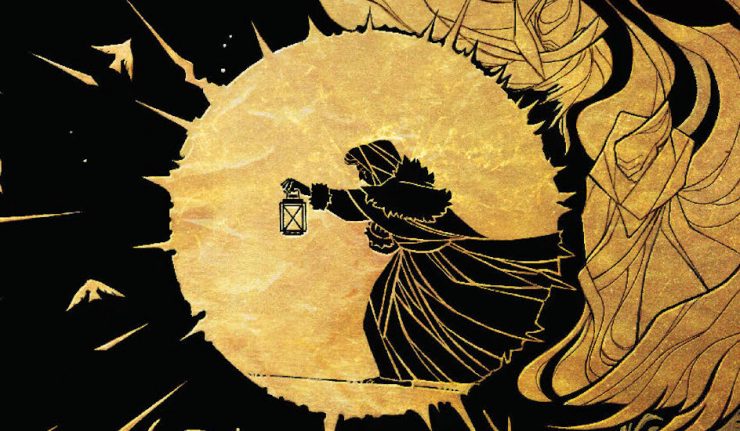 A grandmother is rushing through the night in an attempt to fulfill a promise to her granddaughter. But with the encroaching darkness, her journey home becomes a fight to save her soul if not her life. She is hunted at every step by creatures that are determined to bring her down. And if they fail, the Slavic god of death — Weles is waiting in in the shadows.

There is something powerful about looking at the stars. In an exchange that crosses millennia, we are party not just to witnessing the wonder of distant suns. We are also witnesses to all the stories told between now and then. A span that covers both time and distance. It’s a wonderful introduction to this story.

Beautiful art from VER opens the issue. It makes panels like the grandmother holding a lantern against the dark feel ominous and ancient. The Zdusze are nightmare creatures that feel like the inspiration for the Upside Down Man in Justice League Dark.

Weles is a dangerous master. The layers he creates spellbind the object of his pursuit and then the reader. Perception is manipulated until only the objective becomes clear. In light of this, even the promise of a grandmother has its limits.

The concept of perception is important to the story of the grandmother, and the story of the creatures that are hunting her. In this case, it is through misdirection and deception that the grandmother finds herself struggling to make it home safely. Her immediate safety is diminished by her concern to be a good host who is home to greet visitors. It’s an important character note that highlights her distraction and willingness to pay less attention to the immediate threat by focusing on what she believes is the greater problem.

The hardest thing about a story that is based on an old folktale is that so many of those stories rely on similar conventions. Among them is the idea that the fear that a character is fighting is a fight that has already ended. The challenge for the character is to understand what this means to the story. In the end, it is clear that there is an opportunity for a positive resolution, but it could lose readers along the way and leave behind an ambiguous feeling about the purpose of the story based on their interpretation of the ending.

Jim Henson’s The Storyteller Ghosts #4 is a lovely ending to this chapter of the Storyteller series. The project does a marvelous job of using the theme of ghosts, like the many themes that have preceded it, to great effect. The selection of artists and writers are inventive and creatively reimagine classic folk tales that have lived on in the oral tradition for generations.

And the concept of generations is one of the great things about this series. These are stories that have been told at bedsides and firesides to the delight of listeners. The imagination to create a personal interpretation that feels timeless is a credit to the power of the stories that have been selected and the creators who bring them to life.